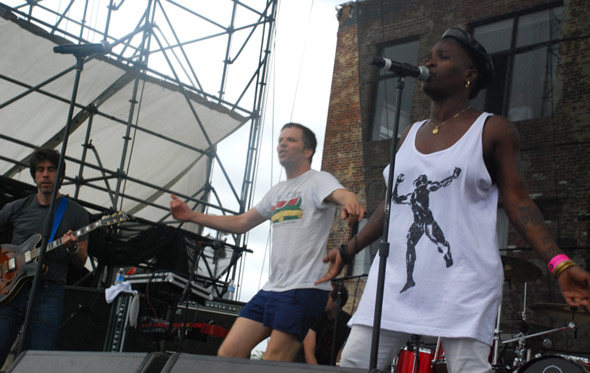 In the long, long ago, before the economic collapse (i.e., two or three years ago), when Wall Street was riding high on sub-prime mortgages and no one had heard the word ‘foreclosure’ in decades, some of New York City’s largesse fell upon the arts, including the free summer concert series.  It wasn’t just the highbrow, long-established series like Central Park SummerStage (QRO venue review) or Celebrate Brooklyn! at Prospect Park Bandshell (QRO venue review), but also brand sponsors trying access the young at events like Manhattan’s Seaport Music Festival at South Street Seaport (QRO venue review) and Brooklyn’s McCarren Park Pool Parties (QRO venue review), creating a veritable cornucopia of free shows each summer for Big Apple music lovers.  Then Wall Street imploded in the fall of ’08, and the following summer saw the free show options decline just as how all of America’s festivals declined (QRO 2009 Festival Guide).  2010 has been a serious bounce-back year for the wider North American festival circuit (QRO 2010 Festival Guide), but charity- & advertising-based free concert series like those in New York aren’t going to be the first to feel the effects of this trickle-down recovery.  And the weather, while not as extreme as in the rest of the world (ever notice that no natural disasters ever happen in the five boroughs?…), hasn’t been kind, such 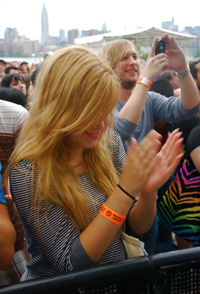 as the heatwave in the beginning of July.  But !!! persevered through it all to put on the best Pool Party of 2010 on Sunday, August 16th.

The Pool Parties took a particularly hard knock in 2008, as the abandoned community pool-turned-outdoor concert venue McCarren Park Pool finally earned the city enough money from the paid shows there to finance it being turned back into an actual community pool (why couldn’t the economic collapse have stopped that?!?).  So the Pool Parties seemed over, but like the always-saying-this-year-is-the-last-because-of-redevelopment Siren Music Festival on Coney Island (QRO festival recap), a second life was found, with intervention by the government and moving just a bit to the southeast at Williamsburg Waterfront (QRO venue review).  Still called the Pool Parties despite no longer being in one (though closer to any body of water than the old one was…), the 2009 season started with Mission of Burma (QRO live review) & Brooklyn Borough President Marty Markowitz, and ended with Grizzly Bear (QRO photos) & New York Senator (and Brooklyn-born) Chuck Schumer. 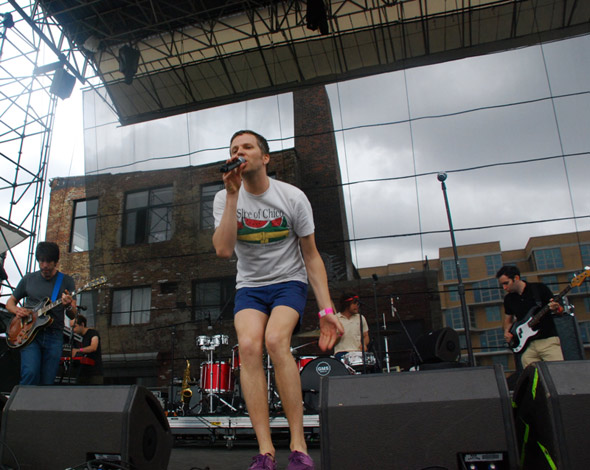 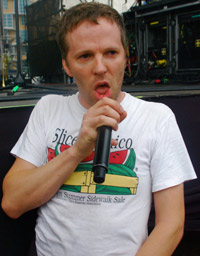 But even then, a few clouds formed over the new location, like no slip-‘n’-slide or having to have a designated beer area cordoned off from the rest of the park.  Both were because, unlike the city-owned McCarren Park, the ‘Waterfront’ (really just a two-block vacant lot between Kent Avenue & the East River) is a state park, and state parks have far stricter rules than the loosey-goosey modern day Gomorrah, with state park rangers & state police keeping a watchful eye on the proceedings.  The new lodgings were also reportedly twice as expensive to rent, as the state parks commission wasn’t saving money to build something there but just seemed to view it as another city cash cow to be milked for upstate New York (the real reason Albany’s so dysfunctional – it’s like those ultra-corrupt oil-producing third world countries, just instead of squabbling over petroleum dollars, it’s whatever revenue they can take from the city…).

2010 seemed to be brighter.  The stage was moved and seriously improved, seemingly doubling in height, 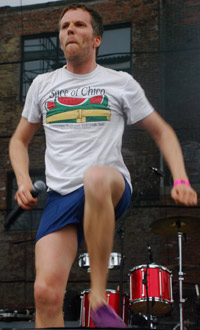 width, and depth, as paid shows were held there for the first time.  Chuck Schumer attended the opening this year (QRO photos), and the beer area was expanded.  Then things started to roll downhill.  One of the events had to be moved up the street to the much smaller Brooklyn Bowl (QRO venue review) due to rain, another due to park rules or something.  The line-up didn’t feature any must-see shows, save for Cut Copy on August 8th (QRO photos), and even that wasn’t the massive, couldn’t-get-everyone-in, people-watching-from-behind-the-fence-or-trying-to-jump-it that Girl Talk had been last year (QRO photos), or MGMT the year before that (QRO photos).  And, to the consternation of everyone who was ‘anyone’, the V.I.P. area, which had featured free beer & whiskey in 2007, free whiskey & a limited supply of free beer in 2008, and a limited supply of free beer in 2009, had only free vitamin water & coconut milk in 2010 (the free alcohol had moved to the ‘All Saints Pub’ inside Williamsburg Waterfront’s sole building, forcing people to kiss up to someone new for their free booze, if you didn’t mind not being able to see the bands while drinking & could figure out who to ask to get in…). 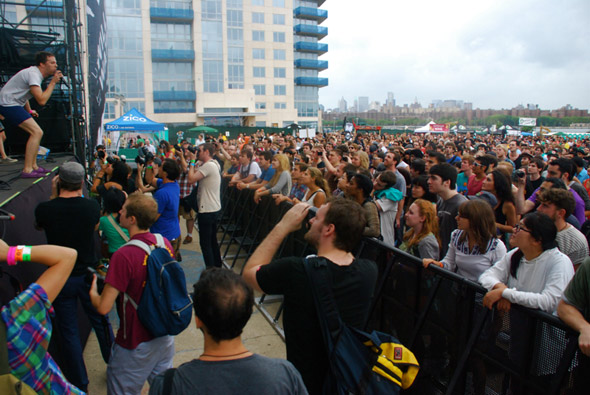 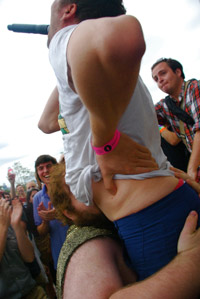 But at the Pool Party after Cut Copy, !!! had even more to contend with.  There was the competition from other free events, like Dr. Dog playing (QRO photos) the final ‘Gone to Governors’ show on Governors Island (QRO venue review), or the one-and-only Public Enemy (QRO photos) at SummerStage – but Cut Copy had had to compete with a packed house a SummerStage for The xx (QRO live review).  There were also particularly tight photo pass rules, which had already been tightened up in 2010 but this day saw limited passes given out & anyone with a camera but without a wristband stopped from shooting from even the crowd.  But the main drag was the weather, not just threatening to rain but actually raining at times throughout the day.  The state park folks always had a quick hook when it came to rain, so even those who would have braved the weather for the show might have stayed away because they expected that the whole thing would be shut down.

However, the sun was shining when !!! took the stage – something singer Nic Offer jokingly took credit for – and the band brought their dance-punk at its funkiest from the get-go.  They played mostly off of the upcoming Stranger Weather, Isn’t It?, 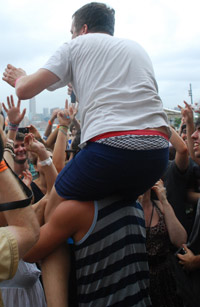 but when the beats were that fine, it didn’t matter to the crowd that they didn’t know the songs (plus the chorus to “Shitscheissemerde (Part 1)”, “What did George Bush say / When he met Tony Blair?” is a little out of date at this point).  And Offer kept up as one of the most exciting indie-frontmen out there, not just busting ridiculous dance moves from start to finish, but also doing numerous dives into not only the photo pit (twice when the photogs were still there, and more times after they were all kicked out), but also into the crowd, at one point riding the shoulders of smart-thinking & strong-backed fan, at another rubbing his belly on the head of another !!!-lover.

Then the weather started to turn.  At some point after the shoulder-riding, the wind kicked up and the rain kicked in (also after the photo pit closed, to the relief of the photogs).  Some fans did disperse as the weather worsened (including the belly-rubber, but he seemed pretty drained just after that – Offer had told the crowd that they needed to catch up with that guy – hanging over the photo barrier while the photogs were still in the pit, perhaps hoping to be reenergized by some more of that attention he seemed to be so looking for), and one side of the crowd was distinctly more active than the other, as Offer had to admit (“And it’s the side closer to the beer…”).  Umbrellas were raised, but !!! kept on, even telling everyone to tell their friends about just what they missed. 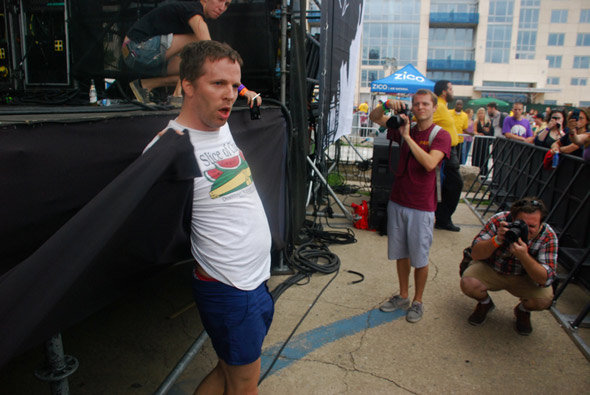 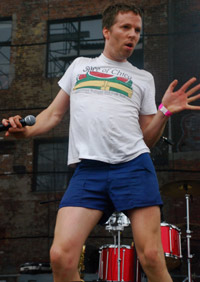 In the week since, a dispute has risen between the two main organizations behind the Pool Parties, Jelly NYC and the Open Space Alliance, with little agreed upon but that both sides seem kind of sick of the ever-increasing work (and cost) of putting the events on.  The final date, August 29th with special guests/no one had been confirmed, has been cancelled, leaving this Sunday’s Chromeo performance (QRO concert listing) as the Pool Party’s final hurrah, quite possibly forever (much of the original spirit still lives on in Jelly’s Rock Yard – QRO venue review – albeit it with much smaller bands) – it doesn’t even seem that the powers of New York’s senior senator can save it at this point (of course, that has been said before…).  The NYC free outdoor summer concert season may be getting shorter each year, but neither that nor the weather has stopped bands like !!! from wringing out every last drop of it that they can. 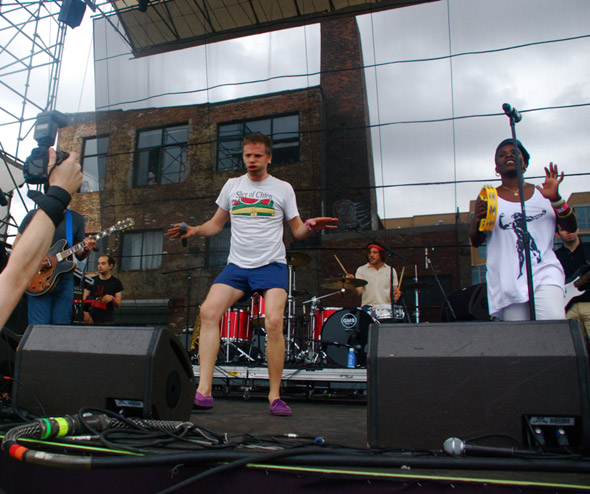