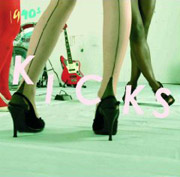 In today’s society, the record industry depends on the sales of singles and compilations.  This is why albums that play well from start to finish are very rare.  Thank God that Glasgow’s three-piece indie rock outfit, 1990s, still know what it takes to produce a record that is not dependent on commercial radio overplaying one track.

After listening to 1990s’ second album, Kicks, I had a very satisfied feeling in my stomach: comparable to that of a delicious meal, or a job well done.  A pleasing notion, knowing that the last 40 minutes of my life were spent engulfed in musical progression rather than the increasingly more common feeling of having wasted time enduring mindless pop-ballads.  With that said, 1990s sure aren’t doing anything that hasn’t been done before.  But then again, why reinvent the wheel?  The band plays like it’s 1970 and sound like it too.  1990s’ front man Jackie McKeown has a voice that is uncannily familiar.  However, the context has been changed so drastically that this recognition is often looked over.  Jackie sounds like none-other than punk’s favourite son, Johnny Rotten.

In fact, 1990s draw much of their sound from 70s punk bands, including: Mr. Rotten’s Sex Pistols, The Clash, The Damned and Buzzcocks.  Yet 1990s take their predecessors’ niche sound, throw in a few well-placed harmonies, some heavy production work, impressive guitar riffs, and thereby make their punk influenced sound, seem, a lot less… punk.  This is a strength 1990s have, and also a weakness.  The band have found mainstream success, but have been accused by many a die-hard punk fan of selling out.

Another weakness could be the album’s content, which is offensive to some, and rather hilarious to the rest of us.  1990s sing about getting wasted in Glasgow, chasing women, and then back to getting wasted in Glasgow.  Many self-declared critics would say that Kicks is a very simple record.  Sure, you could over-analyse Kicks and pull on its many loose threads until it resembles a bare and fairly useless document of our times.  But where would that get you?  In an age where most bands seem to try and outwit the act before them, it’s kind of nice to be able to listen to a song and not have to pull out the dictionary or ponder the cryptic meaning of every other word.

1990s provided a glimmer of hope for the post-punk revival of the early ‘noughties’, after their debut album Cookies was met with extremely critical acclaim.  However, after a two-year hiatus, the band faded from public attention, given that the modern-day consumer’s attention span barely outlasts the life of a common housefly.  Though as it turns out, their return is perfectly timed to remind us that our era may not be completely devoid of music that exhibits both versatility and originality.  1990s manage to cram 70s punk, blues, rock n’ roll and power-pop into one well-formulated package.  With impressive vocal work, driving rhythm and infectious melodies, 1990s can be added to the long list of Glaswegian success stories.