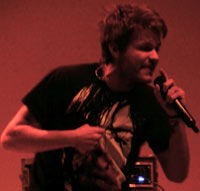 It would be presumptuous to assume that 3OH!3 really are as shallow and crude as they appear.  And it would be wrong to dismiss the Colorado natives as being misogynistic, rude and ignorant.  We thought that the Beastie Boys were crude and obnoxious at the start, but then they converted to Buddhism and wrote songs that sampled Tibetan chanting.  So maybe there is hope for Nathaniel Motte and Sean Foreman – or perhaps the two white-bred, electro-pop artists really are as crass and tactless as the songs they write.

After a ten-minute set by Southern Belle (not sure what to say about a band that played a 10-minute set), Down with Webster were a perfect appetite-whetter for a crowd of drunk college kids and pre-adolescent girls adorned in DWW/3OH!3 gear at Orpheum Theatre in Madison, WI on Friday, November 5th.  With seven members (three of whom rap) Down with Webster did not lack energy, and their frenetic stage work certainly looked tiring.  The group finished with a lacklustre cover of the ‘70s Hall & Oates hit, "Rich Girl" (the title of their version: "Rich Girl$").

Then Hellogoodbye entered and received a raucous cheer.  Beginning with their platinum hit,

"Here (In Your Arms)", the geek-chic group of haircuts successfully satisfied a 3OH!3-hungry crowd.  In our current music scene of generic rock, holier-than-thou indie, obnoxious power-pop and hip-hop posturing, Hellogoodbye offer a refreshing lack of pretence.  With an unabashed love for catchy tunes, the five guys from Huntington Beach put on quite a show, albeit a brief one.  You could almost forget that they were opening for 3OH!3 and it was genuinely disappointing when 30 minutes after saying hello, they said goodbye. 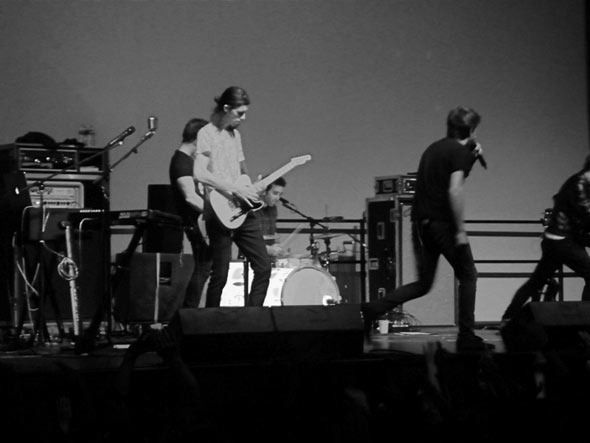 Click here for photos of 3!OH3 from this show in the QRO Concert Photo Gallery

The lights dimmed and a hush fell over the theatre.  In unison the audience began chanting "three oh three oh three…" and touched their thumbs and forefingers together to make the neo-iconic 3OH!3 hand symbol.  It was nothing short of ritualistic and cultist.  It strikes as rather odd that the uncouth Mile High boys were being taken so seriously.  Running out onto the stage with their hands in the air – in the same 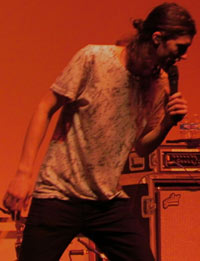 vein as an overpaid motivational speaker – Motte and Foreman caused mass hysteria.  They greeted with "Madison, how the fuck are you?" and then without hesitation, 3OH!3 launched into an hour-long set teeming with energy and alcohol-references.

"One of the main reasons that we started making the music that we make was that everyone was taking themselves so seriously," Nathaniel Motte said in a past interview.  And 3OH!3 certainly do not take themselves seriously; in fact, few people do (save for the cult following that the two have accrued).  The truth is, the music is fun, and the lack of intelligence in the lyrics is not even that noticeable after a while.

Standouts were "Punkbitch", "My First Kiss" (sans Ke$ha), "Starstrukk" (sans Katy Perry), and the surprisingly melodic "Colorado Sunrise" (where the word "Colorado" was substituted with "Madison" in the last chorus – naturally met with huge whoops and cheers). 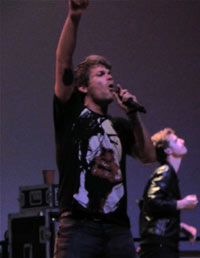 The irony is that Motte was pre-med at Boulder University, and had been accepted into medical school, before he dropped out to pursue a career in music.  So maybe 3OH!3 are not as dumb as they lead us to believe.  Maybe the two are attempting to analyse the self-indulgent and grandiose enigma that is the college party generation.  Maybe the whole act is a satirical and derisive reflection of contemporary society – and reveals how sad and sick it is that we live in a world where an album of drug/sex/bro references can sell 41,000 copies in its first week of release.

Maybe we will never know the true intent of 3OH!3, but regardless of the lyrical depth (or lack thereof) and social grace, the Boulder-natives sure know how to put on a show.  When they came back on stage for an encore of "Don’t Trust Me", one couldn’t help but cheer along with the crowd – the euphoria in the air was infectious.