4Knots has adapted with the times.... 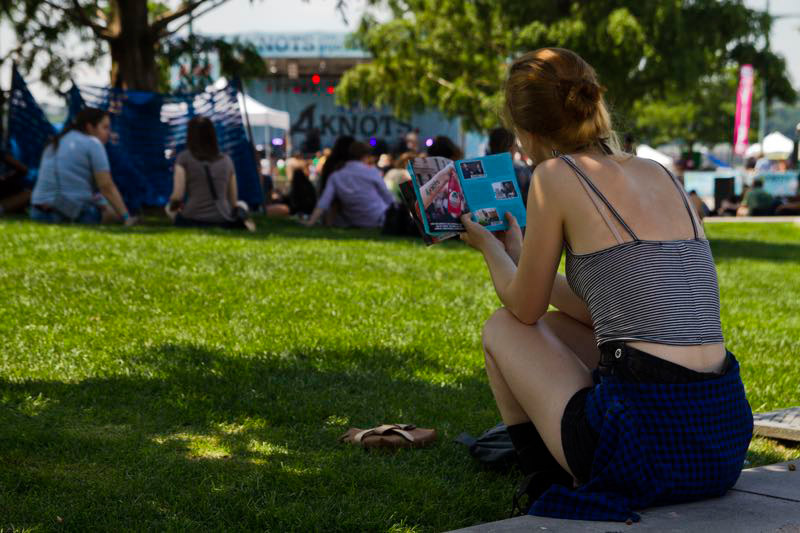 The Village Voice hasn’t managed to be & stay the most storied independent weekly in the country by chance, as it has adapted and changed with the times (much like Greenwich Village itself). It’s always had a strong foot in music, from the Beat scene through “Pazz & Jop” poll to journalists like Robert Christgau to more recently. The shifting nature of Coney Island (read: redevelopment) forced the closure of The Voice’s beloved Siren Music Festival down there after the 2010 edition (QRO recap), but the paper merely moved up water (and closer to the actual Village) the next year to Manhattan as the 4Knots Fest on South Street Seaport (QRO venue review). But Hurricane Sandy has forced a major revamp of that downtown location, bringing about a new berth for 4Knots, Hudson River Park’s Pier 84 (QRO venue review), on Saturday, July 11th. 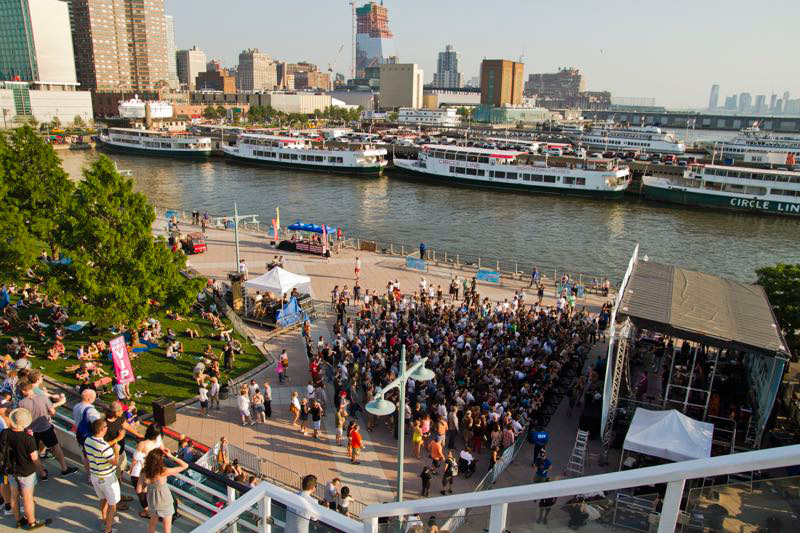 It should also be noted that the festival went from being free to being ticketed, including a VIP boat [more significantly to all of the press people – they no longer got free drinks…]. This changed the nature of the fest, from one where kids on summer break would squeeze onto a pier for whoever was playing, to one that had an older crowd who arrived when they wanted and watched how they wanted. The actual space in front of the stage could seem thinly populated at times, but there was also all the fans on the grass & tree portion of Pier 54, seated in the shade, plus everyone on the three levels of the cruise-like boat (which also had the Artist’s Lounge, though whoever was hired to do security wasn’t letting anyone up there, even if told to by the people who were actually running the festival…). 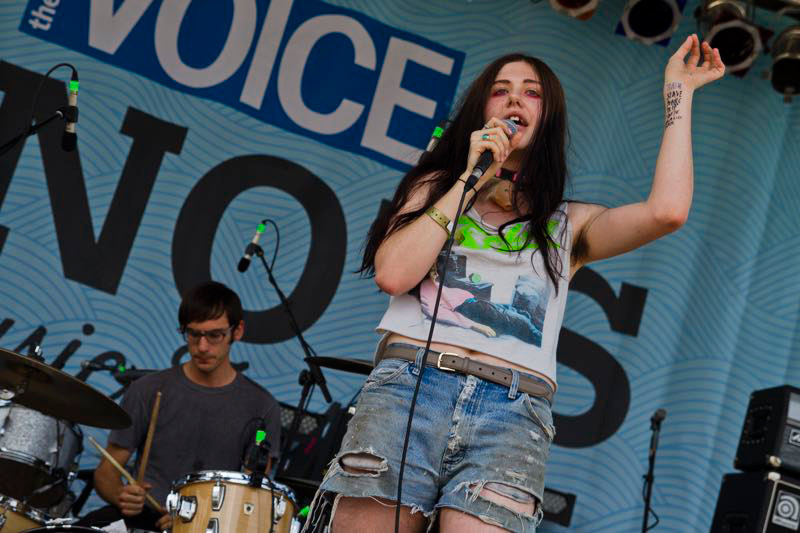 One thing that didn’t change was the weather, as it was sunny and hot – a far cry from the downpour that forced the cancellation of the Waxahatchee set on Pier 54 two days earlier. Instead, the sun was definitely shining as things began with Surfbort. Their noisy open was divisive for who was there, but the band ended up being more memorable for the drunken post-show antics of one member, who got into a fight with his band on the boat, then decided to jump for a dip into the Hudson to cool off, was thrown out of the festival, tried to reenter it in a variety of guises… 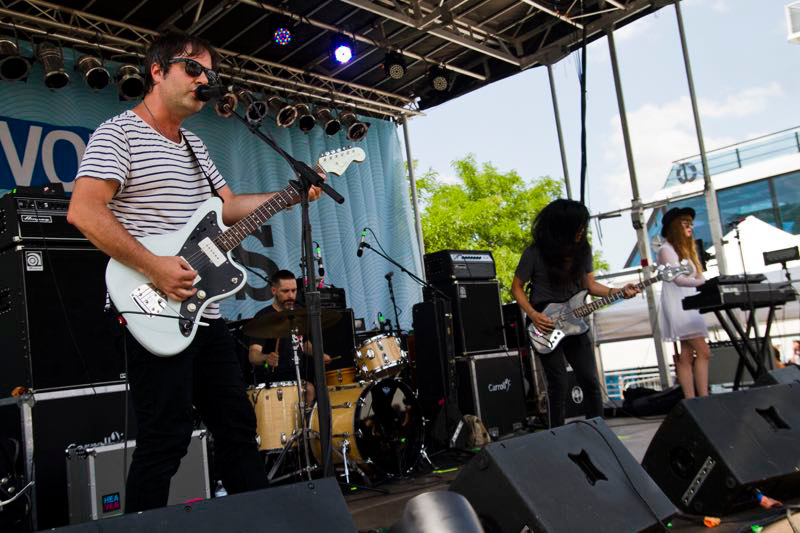 On the actual stage, the music of the day distinctively leaned toward the psychedelic (probably taking a cue from the headliner – see below). Heaven’s spacey grunge had hints of psych, while Heaters leaned heavier on that pedal, but was still a younger take on the older sound, very much ‘today’s psych’. 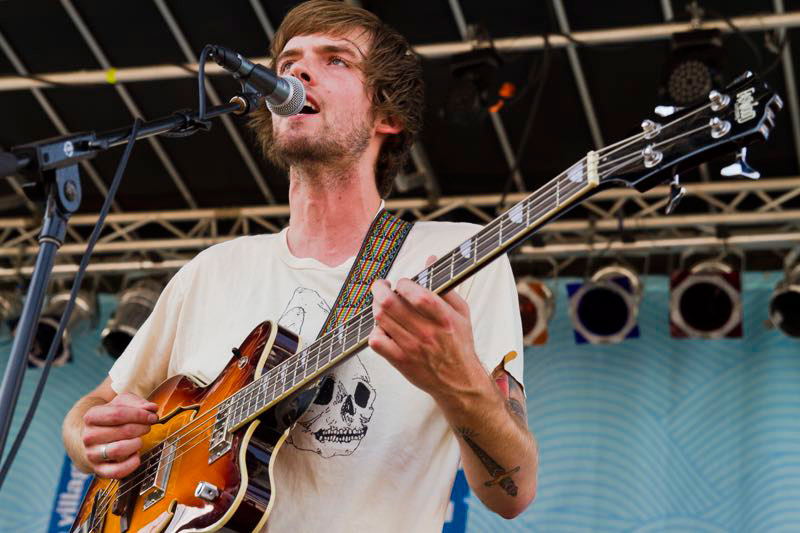 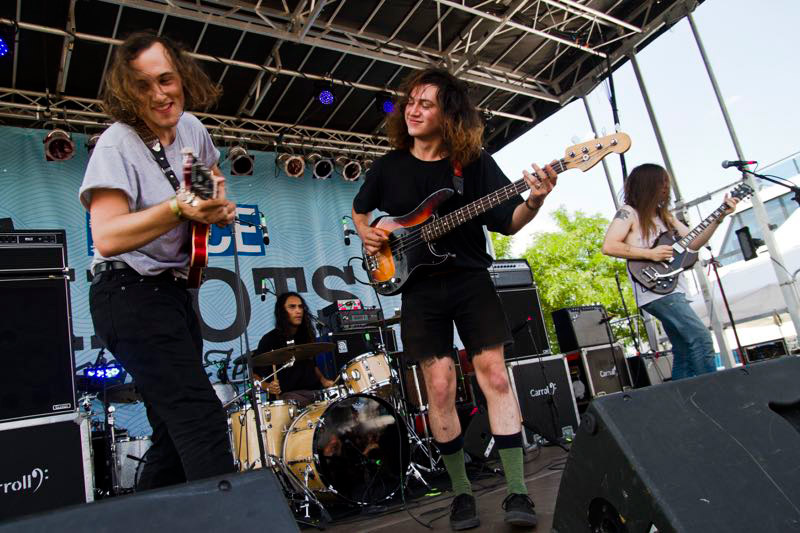 But you’re not gonna have a rock ‘n’ roll festival in New York without some god ol’ fashioned garage-party, which came in the form of Meatbodies. They joked about all being sick from eating too much cheese the night before (which didn’t dissuade the people on the VIP boat from consuming the cubes of cheese put on offer as part of limited free hors d’oeuvres – no dip?…). You also can’t have a music festival in New York without an act that’s too artsy for their own good, which was the case with Happyness. First the group took too long to set up (it’s always difficult to set up outdoors, but just accept that it’s not going to sound perfect and get on with it), and their sweet & airy sound was too relaxed after everything that had come before. 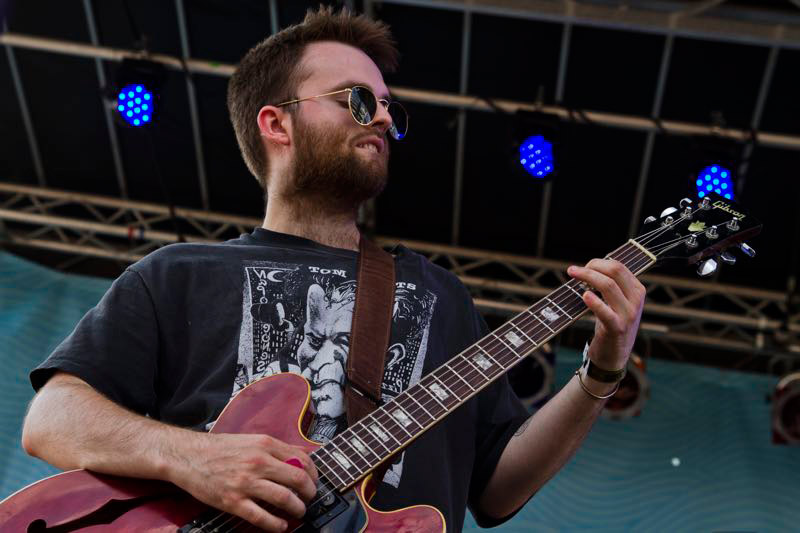 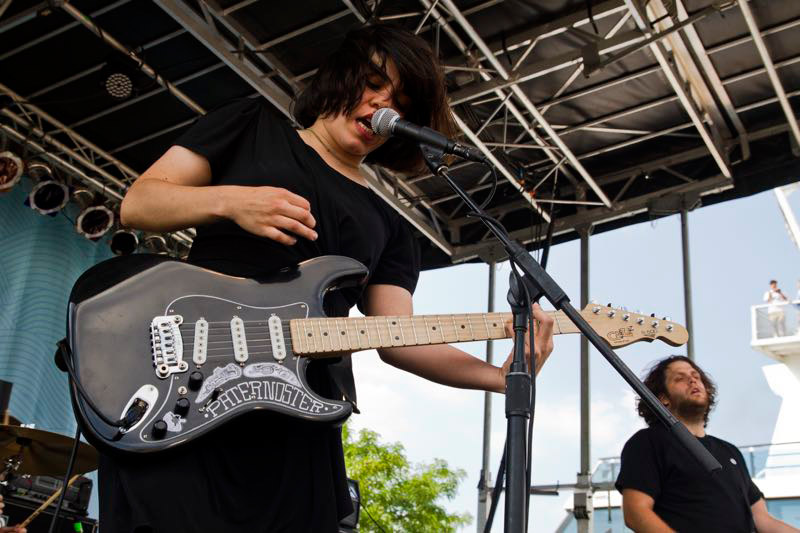 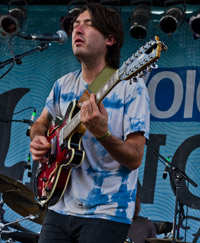 Anything but relaxed was the first ‘big’ group of the day, Screaming Females. Marisa Paternoster & co. have won many fans (and detractors) by sounding a lot like what their name says, but by this point there’s a little less screaming going on, relatively speaking, which has made them more palatable, if also a little less special. The cheery indie-jam of Mikal Cronin was particularly accessible and enjoyable, even if it felt like a lull between Screaming Females and the craziness that is Twin Peaks. Still more of a spectacle than a musical act, these boys were suitably wild on stage, though they had to cut their set short as the whole day’s music had begun late. 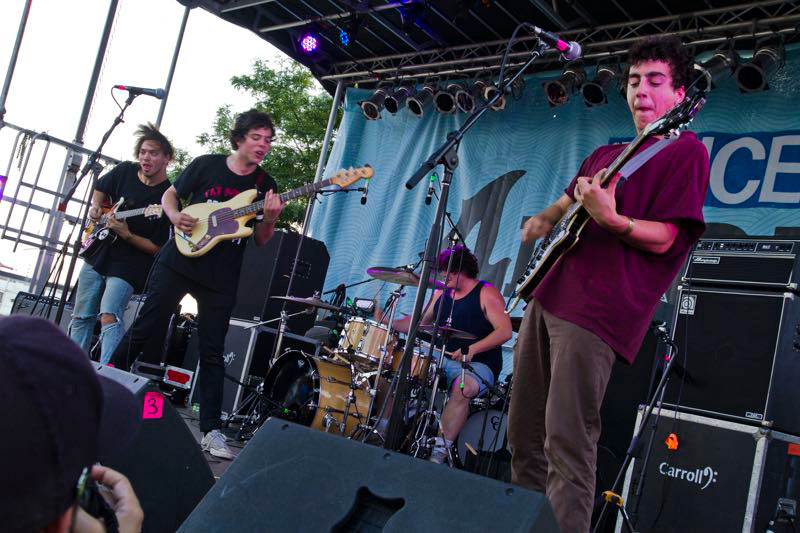 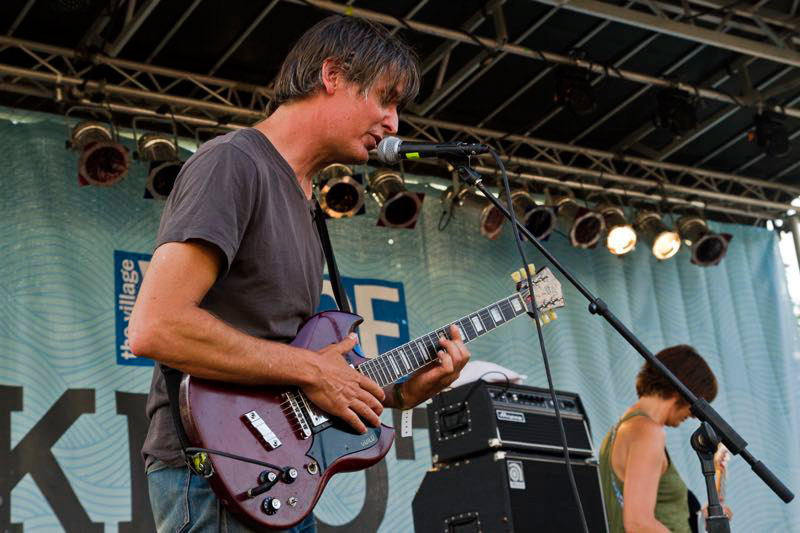 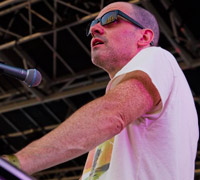 And you don’t cut Stephen Malkmus short. The ex-Pavementer was there with his Jicks, and while early on the singer/songwriter seemed rather reticent on stage, guitarist Mike Clark was engaged from the get-go. And Malkmus did warm up as the set went on, including overlapping his hands with Clark’s as they shared piano duties on a sweet “Freeze the Saints”. The set was naturally dominated by the group’s most recent release, last year’s Wig Out At Jagbags (QRO review), but nicely mixed their catchier & jammier stuff. 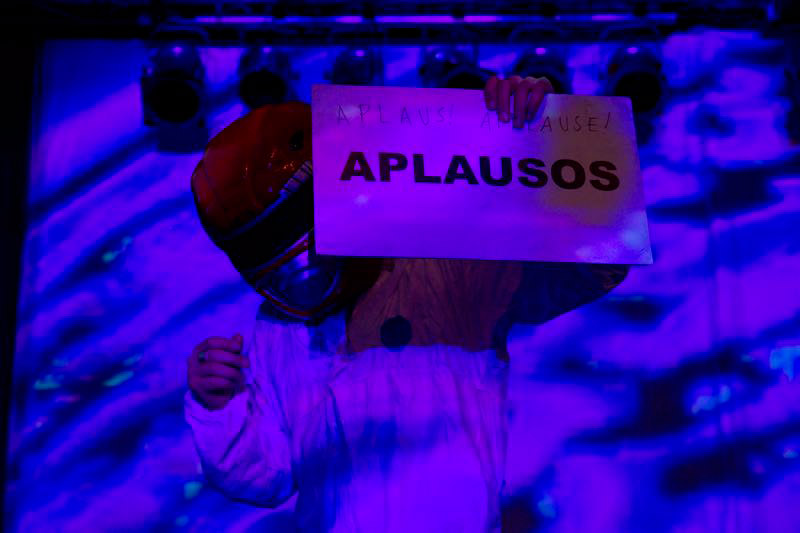 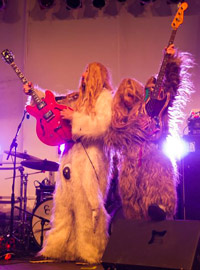 But if you really wanted to jam out, look no further than headliners Super Furry Animals. In the nineties the group reintroduced and reinvented psychedelic rock to Britain & beyond, but are only now coming off of a five-year hiatus, with this their only North American show since then. While there’s no new music from them on the horizon, they did just reissue 2000’s Mwng, their acoustic album all done in their native Welsh, and the set featured Mwng’s “Pan Ddaw’r Wawr” in the midst of a greatest hits collection that included opener “Slow Life” (with singer Gruff Rhys wearing alien mask & ‘APPLAUSE’ cue card), vegetables chewed as percussion for band favorite “Receptacle for the Respectable”, and an epic close with their breakthrough hit, “The Man Don’t Give a Fuck”. 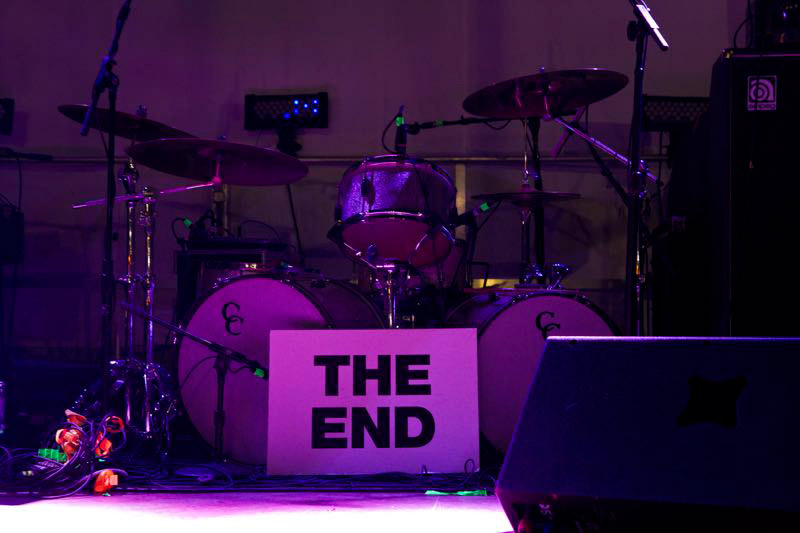 There will naturally be complaints about the event no longer being free [and press people thinking that the giant inflatable Deep Eddy Vodka bottle was now just a tease…], but 4Knots has adapted with the times. 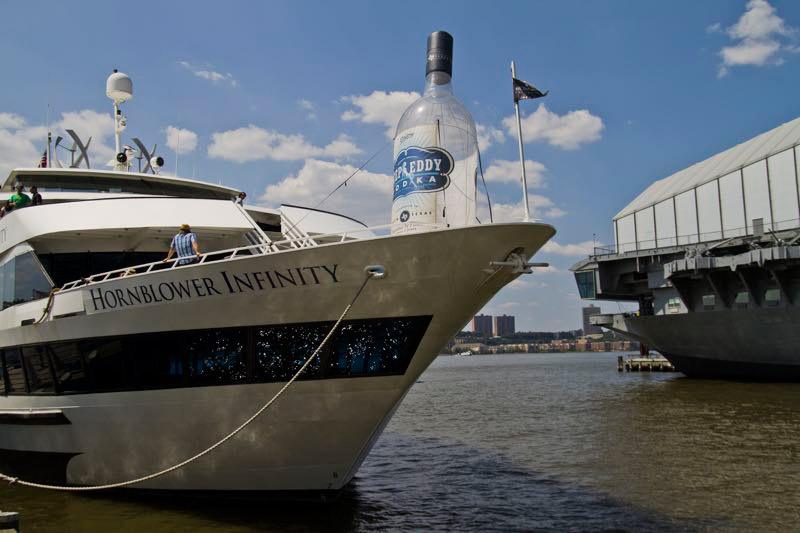