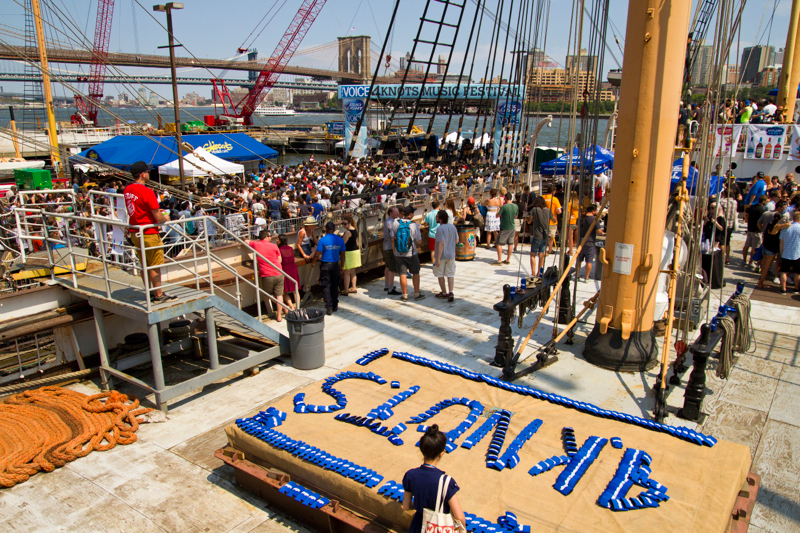 Time was, The Village Voice would hold a huge – and free – Siren Music Festival at Brooklyn’s own Coney Island on a Saturday in the middle of the summer, with two stages of alternative music crammed between rides and freak shows. Even if you weren’t particularly into the Voice or alt-rock, it was a great excuse to take the long subway trip down to that special New York isle.

But crowds left Coney Island’s old amusements, while redevelopers moved in, and after 2010 (QRO Siren recap) the space became no longer viable/too expensive for Siren to continue. But the following year the Voice moved up, not on, to South Street Seaport right in Manhattan at the 4Knots Festival (QRO photos), staying on the water, staying on Saturday, staying free. However, the line-ups weren’t as amazing, and the hipsters were criticizing that it was better back when – akin to when the Pool Parties at McCarren Park Pool (QRO venue review) moved to Williamsburg Waterfront (QRO venue review) in 2009.

The Pool Parties only lasted two years at the Waterfront before being discontinued entirely – but 4Knots has not only continued but flourished. 2014 4Knots faced a new/old problem: redevelopment. South Street Seaport (QRO venue review) is getting a major facelift, removing where the main stage of prior years had been, and shrinking the amount of crowd space on the pier itself. It could have been an excuse to go small, or even skip the fest this year, but instead the Voice delivered its best 4Knots yet on July 12th. 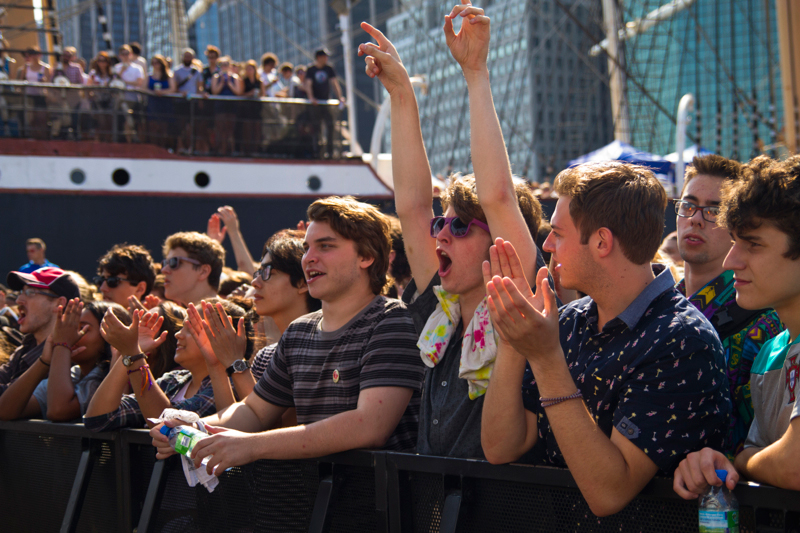 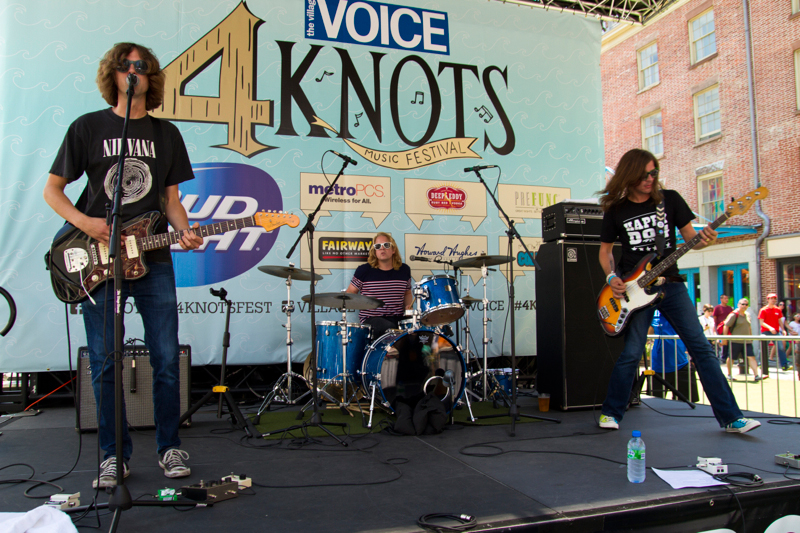 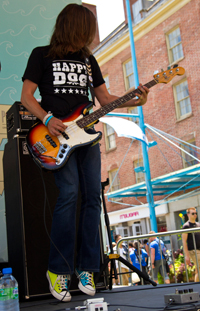 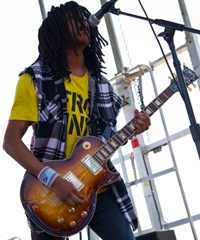 Things opened up with locals Dead Stars playing the ‘Front/Row Stage’, the festival’s new second stage, which was located across the street from the actual pier, in the turf-on-cobblestone beer garden. That stage was decidedly smaller (and curiously in the same beer garden, but other side of it, from where Seaport Music Festival is having its own free Friday shows this year, whose season had started the day before – QRO photos), and you couldn’t bring your drinks from the pier to the garden, but served as a more intimate and relaxed setting, with shops all around. Meanwhile, Radkey opened up the ‘Pier 16 Stage’ – just one dock over from the under-reconstruction old main stage, it was where the side stage had been last year at 4Knots (QRO recap), but was a bigger actual stage this year. Not that it didn’t have its own problems, as the power went out during the punk brothers’ set, but thankfully was turned back on again after not too long. 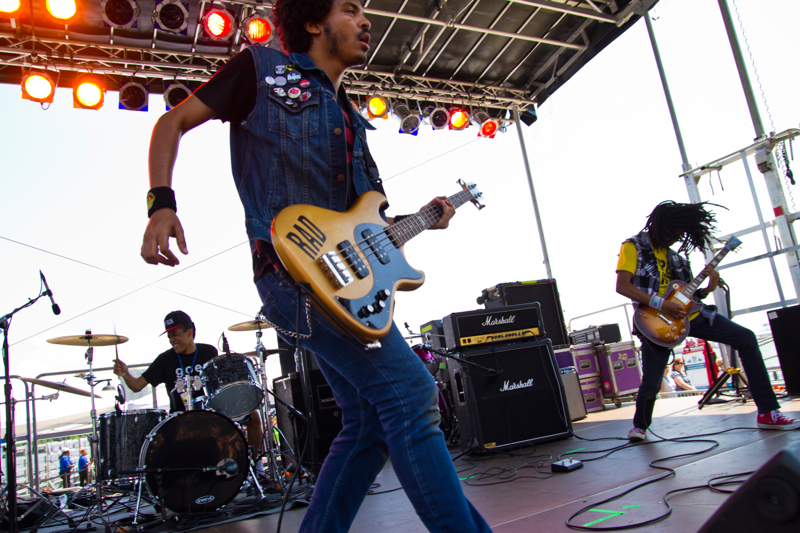 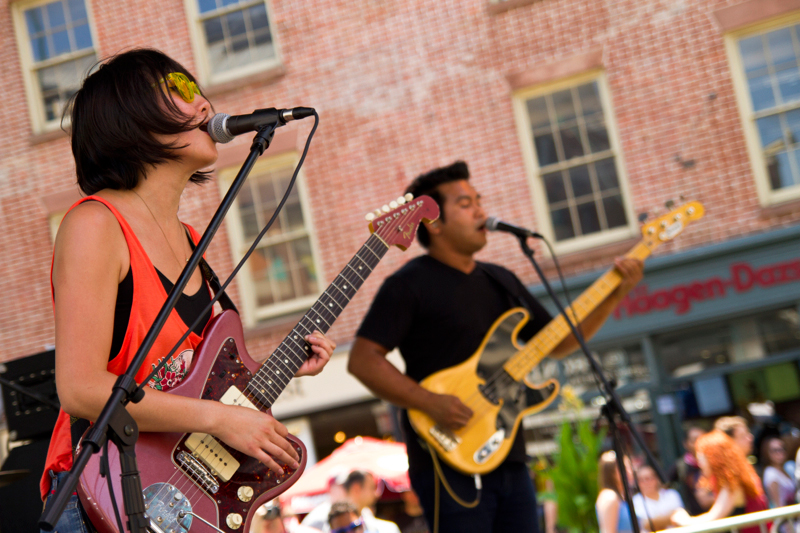 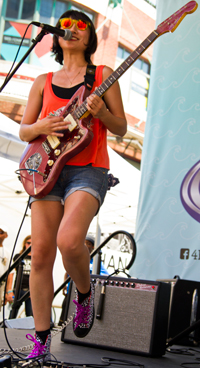 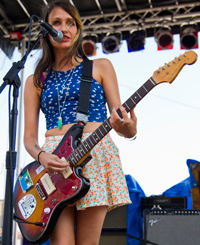 As special treat at 4Knots was going to be RE-Tros, all the way from Beijing, but of course they couldn’t get their visas in time (it’s been a problem for bands, from Beijing to Britain, ever since post-9/11 tightening of border controls), so instead it was the bouncy garage-jangle of locals Crazy Pills on the Front/Row Stage. Back over on the main stage were indie-darlings Speedy Ortiz, who are riding a wave of alt-press love, so of course the Voice would book them, though they were harder and louder than you might have expected from the buzz. 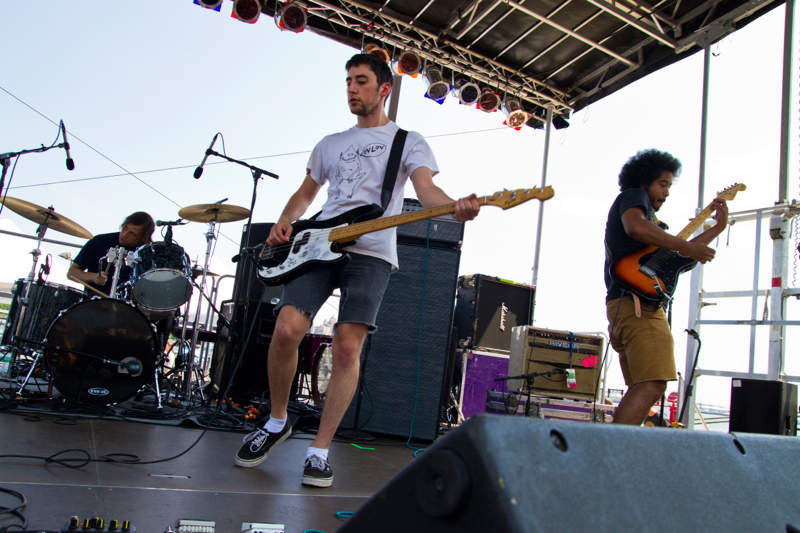 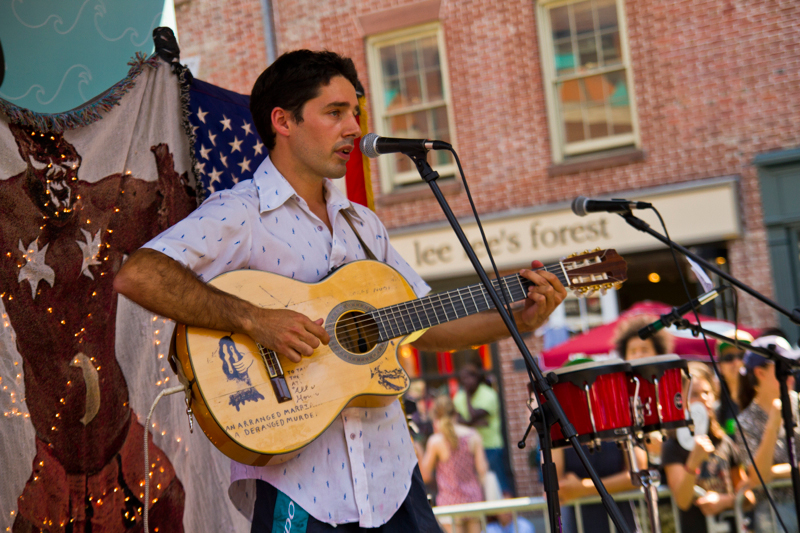 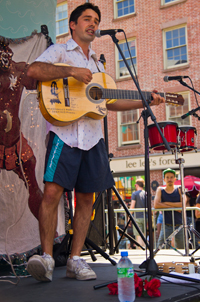 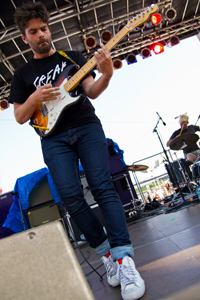 The early tech issues seemed to have spooked Juan Wauters on the Front/Row Stage, who spent way too long at the start of his set saying, “Hello?” into his mike – apparently his monitor wasn’t working, but the amps were, and everyone had to hear him soundcheck for too long. The day had been basically young bands to that point, so on the main stage Viet Cong felt more skilled, more mature than what had come before, with an experienced post-punk sound. 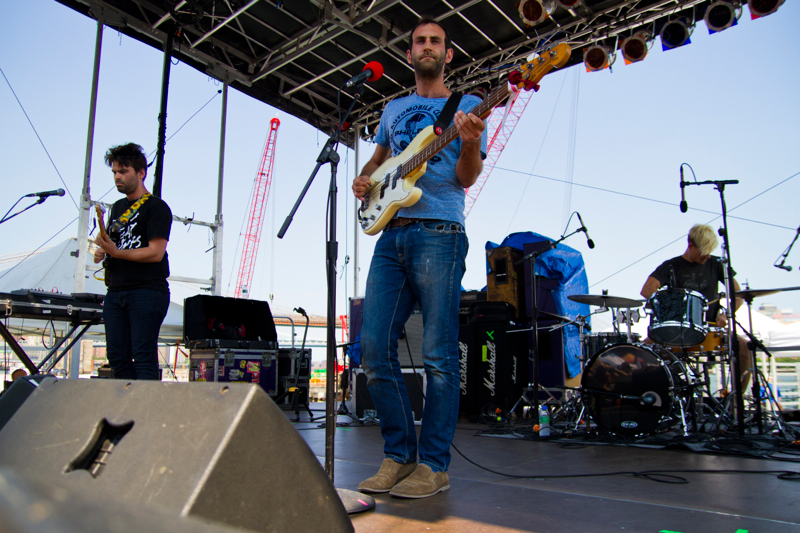 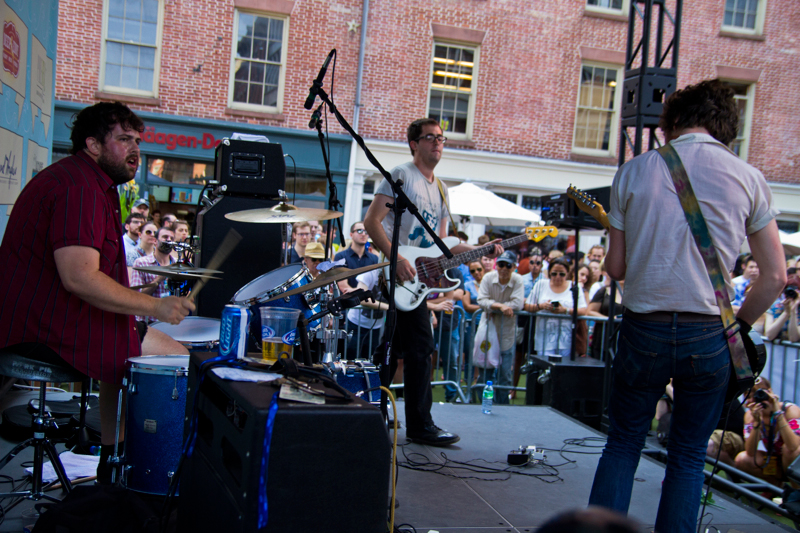 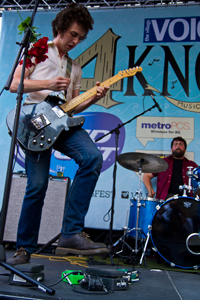 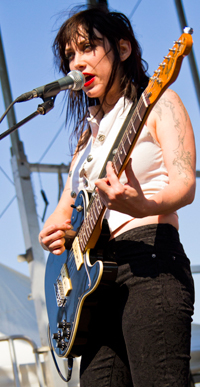 It was a hot and sunny day, which lent itself to sunny acts that were having fun, like Nude Beach, who closed out the Front/Row Stage with their own sunny party-garage, just having fun. Back at the main stage were the ladies & gents of Those Darlins. With a ‘g’-dropping name like that, you’d expect some twang, and the group had that, but were louder & rougher than you might have thought going in – perhaps that was the setting, or perhaps you just underestimated the volume from females (which 4Knots did have in spades – even after would-have-been-headliner The Julie Ruin had to cancel due to frontwoman Kathleen Hanna’s illness). 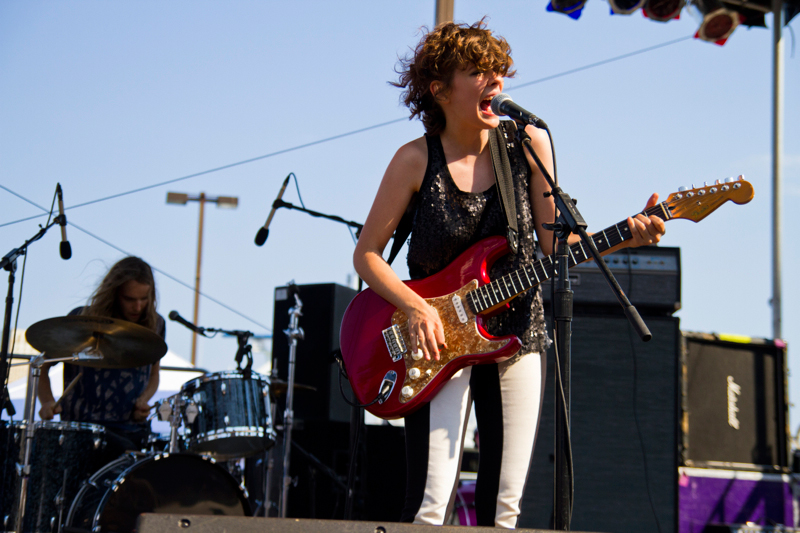 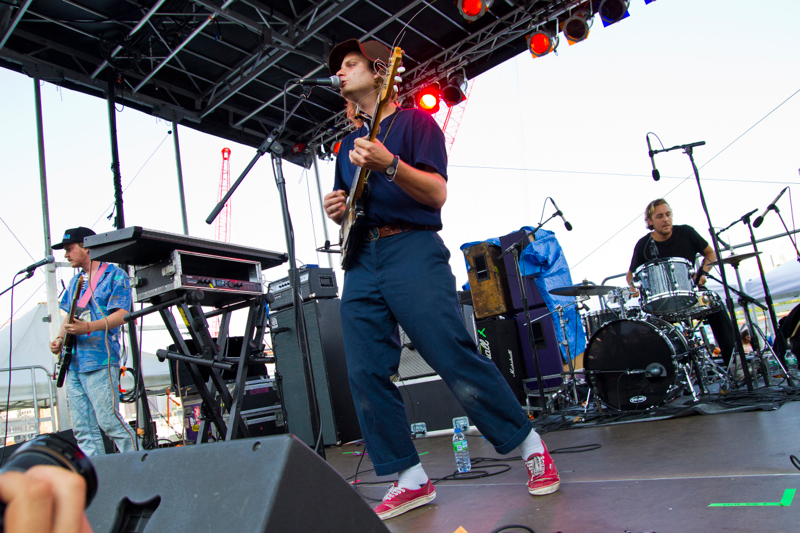 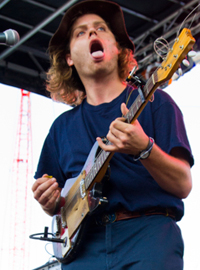 Another artist riding a ton of indie-buzz at 4Knots was Mac DeMarco. His own sunny style is reminiscent of now-defunct Girls (QRO live review), though instead of being well known for growing up in a cult like Girls frontman/now-solo Christopher Owens’ claim to fame, DeMarco’s notoriety comes from his own wild stage antics – which weren’t on display at 4Knots. Maybe he’s getting older, maybe the free, family-friendly setting put limits on what he could do, but it just felt like he went on. 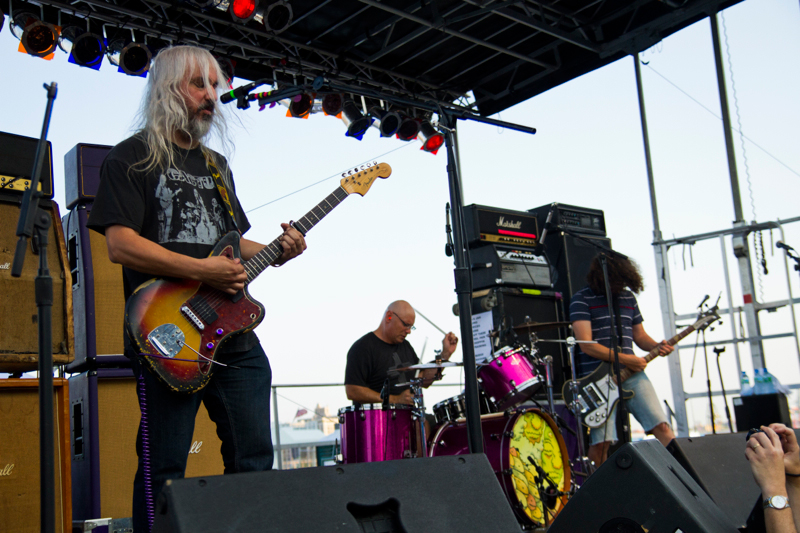 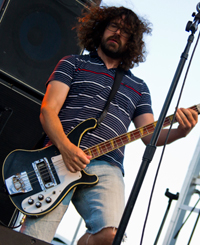 Or maybe was just impatient for the headliner: Dinosaur Jr. At this point, is there anything to add to how great Dinosaur Jr. are? The iconic alt-rock band has had maybe the best twenty-first century reunion, getting singer/guitarist J Mascis, singer/bassist Lou Barlow, and drummer Murph back together again not just to play the old hits, but with three-and-counting records that are as good as anything from their original days. And they’ve got a crowd that appreciates both the old & the new – the reaction to the open of “Feel the Pain” was momentous, and that’s a song from after Barlow left/was kicked out of the band. The group also has the perfect songs to mosh to as well, with breakdowns in the middle where everyone can slow down and appreciated Mascis’ guitar work (playing in front of his ‘circle of amps’, long white Gandalf hair blowing off the East River). They well earned the massive crowd that spilled down the long pier. 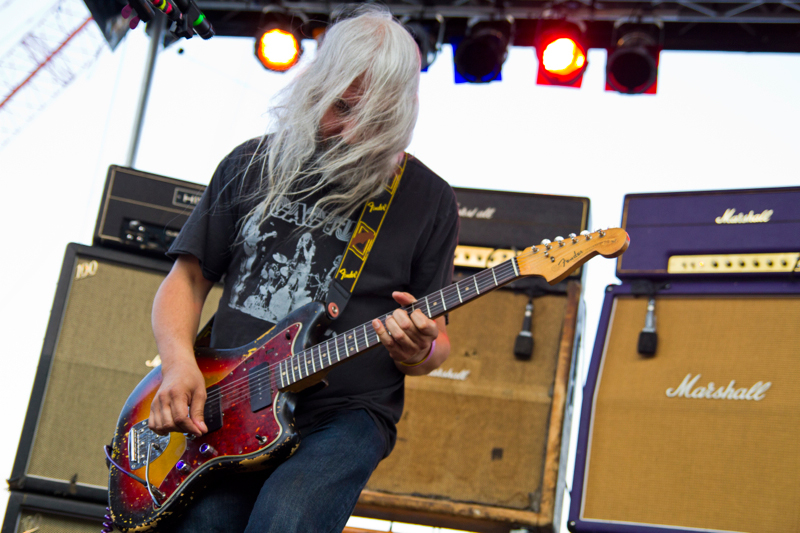 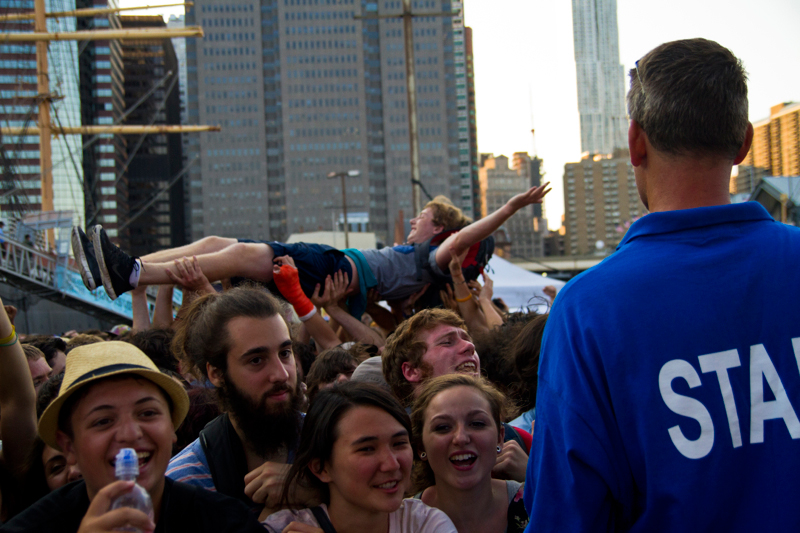 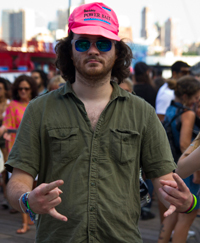 In popular music, it’s been ‘better back when’ since the sixties turned into the seventies – people still go on about The Beatles and Woodstock. Your average Big Apple hipster may not have that long a memory/life, but they always liked the band before they were popular, or at least before you did, and it was better back then. Sometimes that is true (the McCarren Park Pool Parties were awesome, R.I.P.), but there’s a lot to be said for making right now the best time you can. South Street Seaport might never have a beach or a freak show (though it’s also not as hot and easier to get to than Coney Island), but the Village Voice and 4Knots delivered. 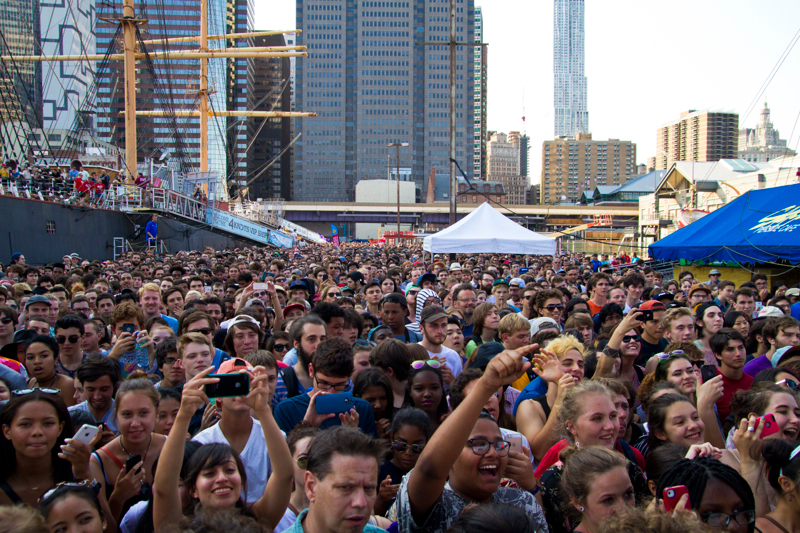