Thankfully things seem to be coming back, both South Street Seaport and 4Knots Festival, which returned to downtown on Saturday, July 9th.... 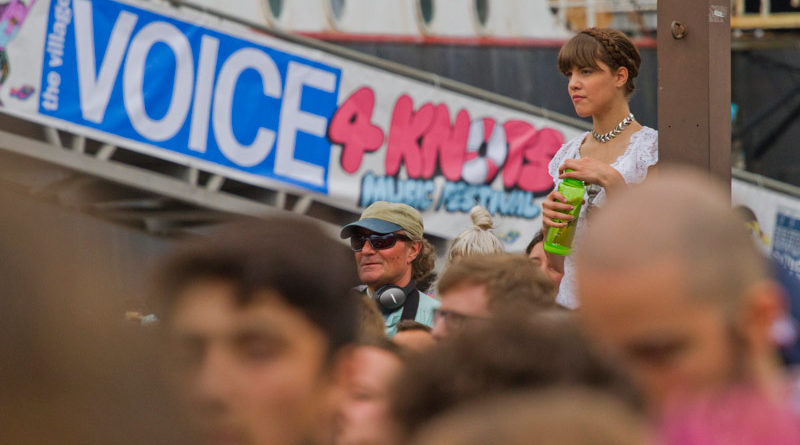 It hasn’t been easy for South Street Seaport (QRO venue review), after Hurricane Sandy & more knocked the area out of commission. The great Seaport Music Festival first had to move over to Fulton Street, and then has basically shut down until the main space’s reopening in 2017. Last year Village Voice’s 4Knots Festival moved from South Street to Hudson River Park (QRO venue review). But thankfully things seem to be coming back, both the Seaport and 4Knots, which returned to downtown on Saturday, July 9th. 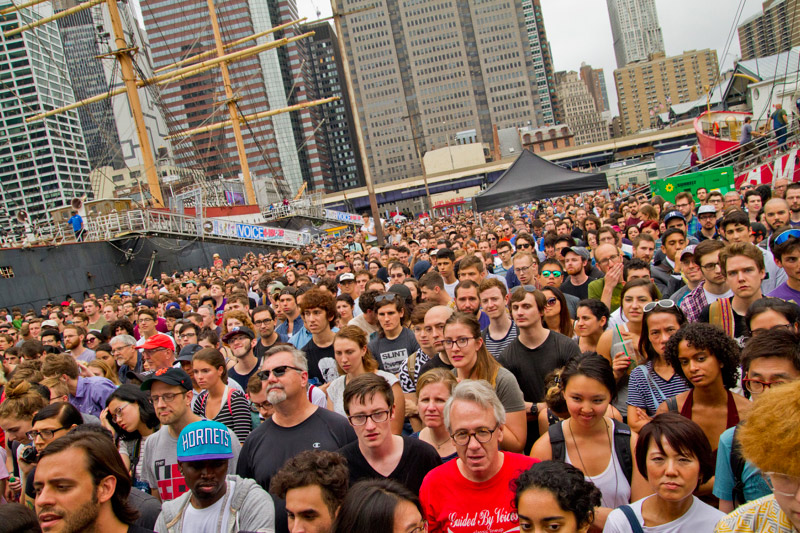 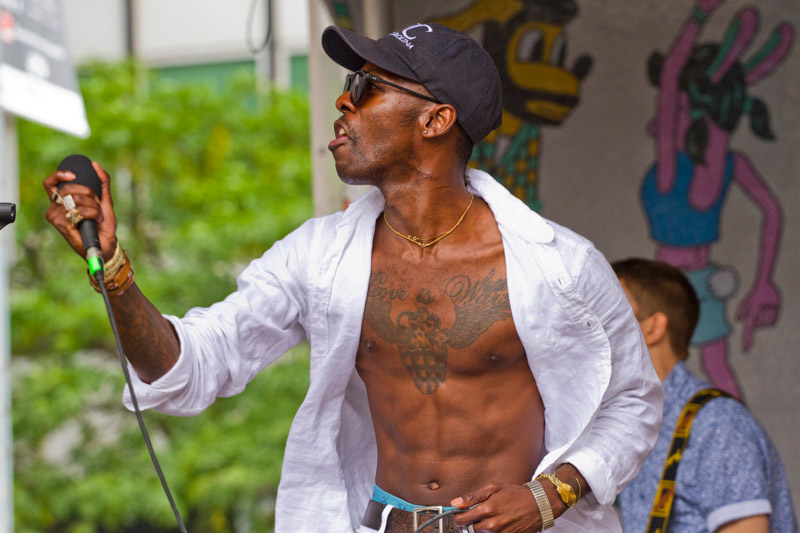 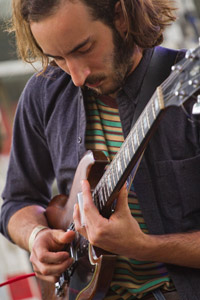 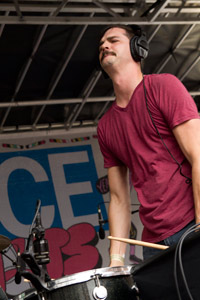 This was very much a return, as the festival also returned to being free, and had two stages (Fulton and the Pier next to part of South Street Seaport still under construction). That meant that the Voice could bring double the number of smaller art-acts, the kind of bands that the venerable free alt-weekly would support. Early artists included Nashville’s Promised Land Sound opening the main stage, then a very active Boulevards opening the Fulton Stage. Kirk Knight had come to South Street off the red eye Los Angeles flight, from the Steez Day party for Joey Bada$$, though it was still a little early in the day (and the crowd a little indie-white) to fully get things going. Meanwhile, one-man band Bayonne was more than just a DJ on the Fulton Stage, bouncing & flailing about, playing percussion, giving funny faces. 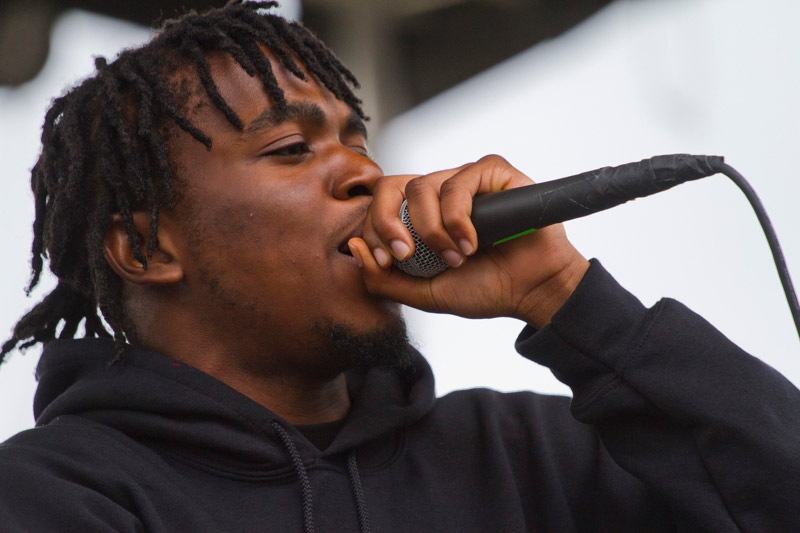 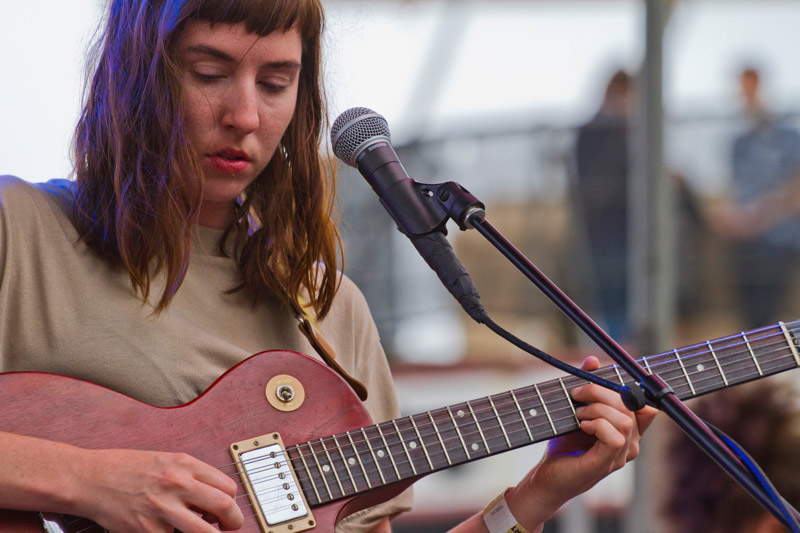 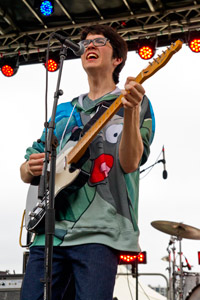 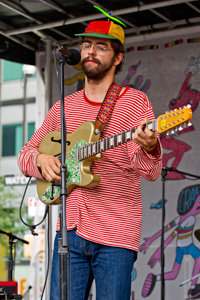 There was a healthy crowd by the time that Mothers took the main stage. They are a buzzed-about act, and had an impressive draw considering that their angular, higher indie isn’t exactly wide appeal. Diane Coffee kept up Bayonne’s wild antics and raised the ante on Fulton, bringing a revival of love and lots of nautical scenery (though it would have looked better if they had been playing on the water & in the shadow of the VIP boat). The crowd stayed big on the main stage for another buzz act, Car Seat Headrest, whose suitable indie-rock had full effect. Meanwhile, Mild High Club on Fulton was the kind of precious indie act where the grown-up frontman would wear a beanie. 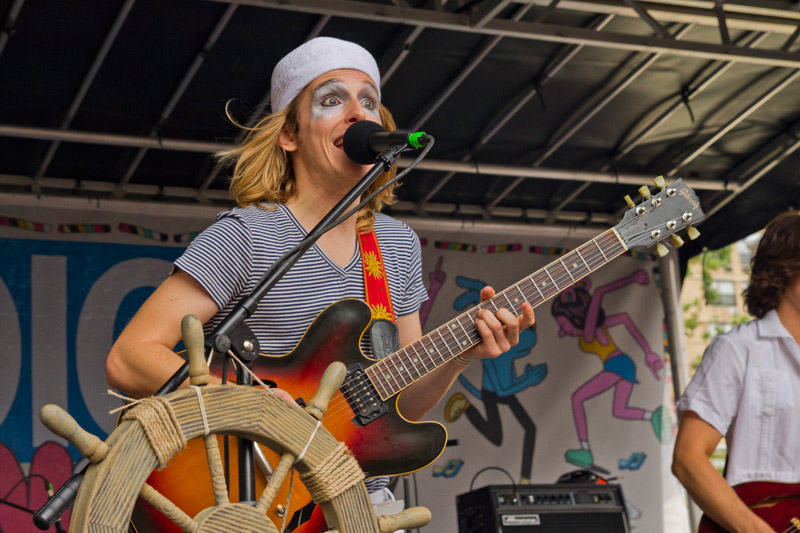 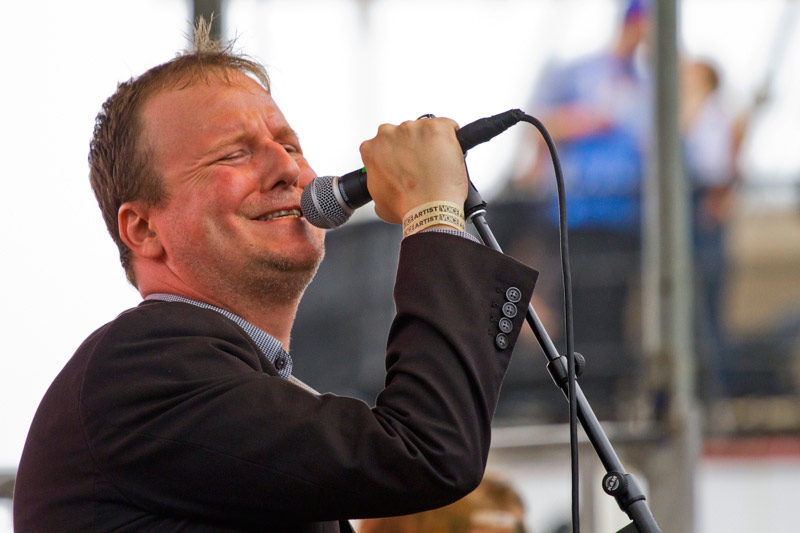 A band with a bit more history, but also recent buzz, post-punks Protomartyr were particularly strong on the main stage. Two years ago they played a Seaport Music Festival show on Fulton (QRO photos), and since then they’ve released their acclaimed The Agent Intellect. Singer Joe Casey is definitely a presence on stage, almost reminiscent of Dick Valentine (QRO interview) of fellow Detroiters (but very different sounding) Electric Six (QRO spotlight on). 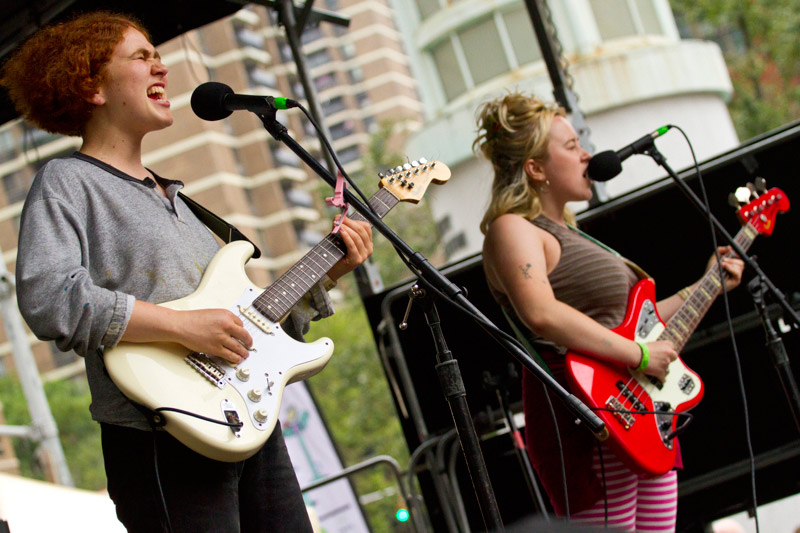 Closing out the Fulton Stage was Girlpool, who played it softer with folk (and yes, females). Canadian bluegrass-pop The Strumbellas were a bit of an outlier on the day, especially as the second-to-last act, but made it work (like Canadian outliers always do). 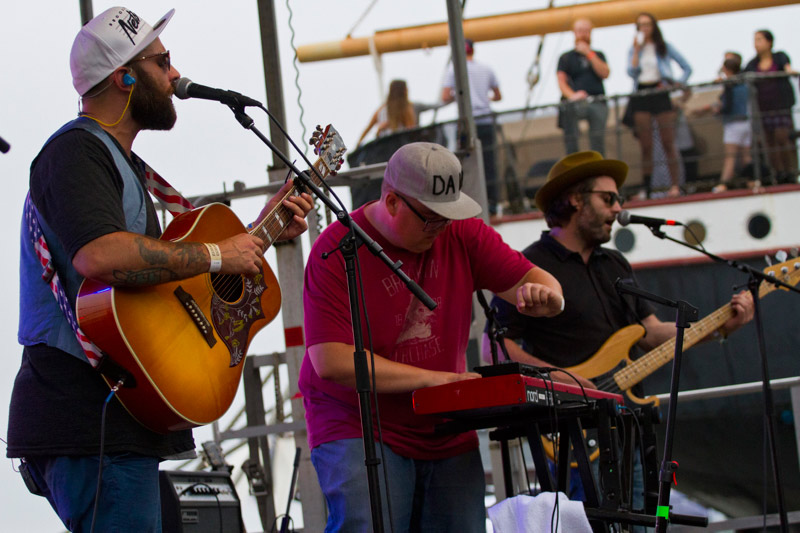 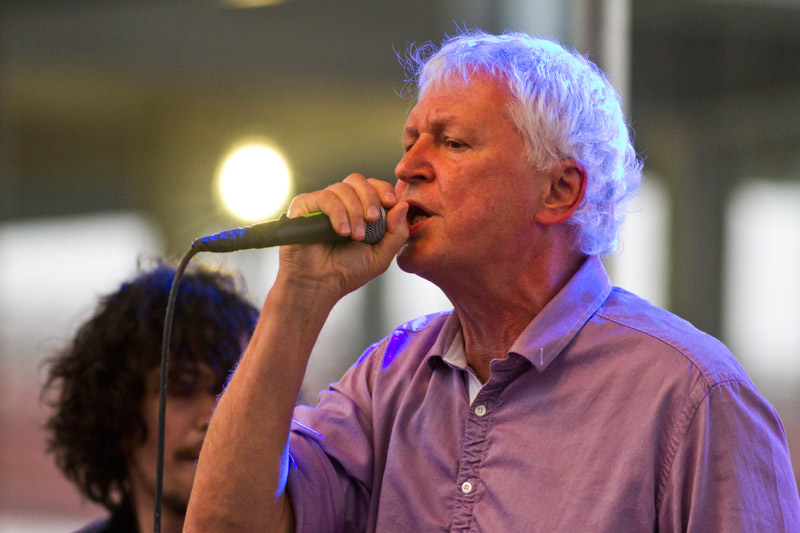 Headlining 4Knots was the prolific Guided By Voices. The Dayton, Ohio nineties alt-garage group broke up, reunited (QRO reunion photos, outdoors in New York), and broke up again, but more recently frontman Robert Pollard has created his own new edition (with Bobby Bare Jr. on guitar). Because GBV’s own catalogue isn’t already deep enough (they released three full-lengths in 2012 alone…), they also drew from Pollard’s massive solo discography. Yet somehow the fans that were squeezed up front still knew all the words – and varied widely in age. 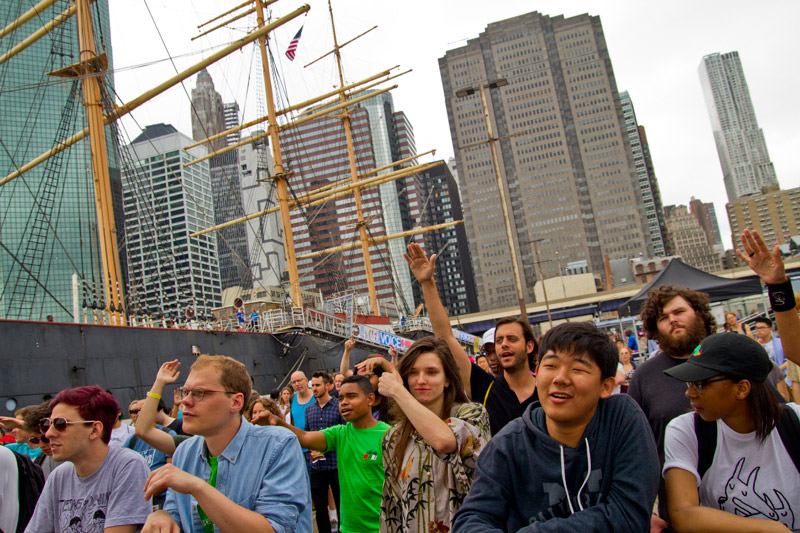 After the ups and downs of South Street Seaport (to say nothing of the newspaper industry), it was great to see 4Knots pulled off so well. Even the weather accommodated, with the threat of rain moved off, but skies cloudy enough so that it wasn’t sweltering [okay, press people were complaining about not being allowed on the VIP boat this year, but your correspondent made it work…]. Here’s to 2017! 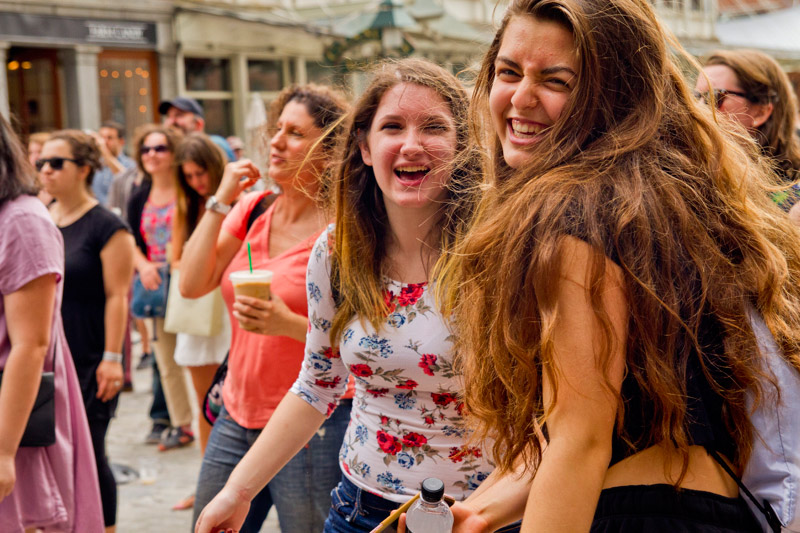