On January 8th, 1947 was born David Robert Jones, soon to be known worldwide as David Bowie.... 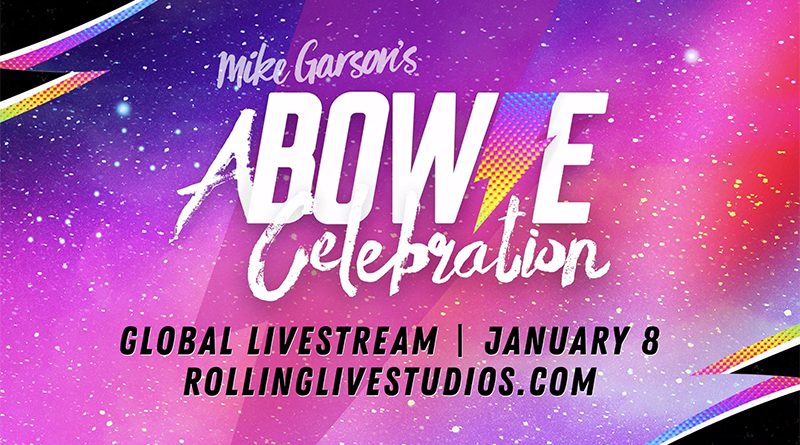 Click here for QRO’s review of A Bowie Celebration at Orpheum Theatre in Los Angeles, CA on February 7th, 2019

On January 8th, 1947 was born David Robert Jones, soon to be known worldwide as David Bowie. He became one of the most acclaimed musicians ever, both critically and commercially, spanning across genres and personas like no one before or since, and his legacy has stayed massive even after his 2016 death (only two days after his birthday). January 8th of 2022 would have been his 75th birthday, and all month to celebrate has been Bowie75, from pop-ups to putting out his unreleased Toy on that birthday. Also on January 8th, longtime Bowie keyboardist Mike Garson put on A Bowie Celebration livestream via Rolling Loud Studios, an all-star collection of artists playing Bowie’s work.

[note: your correspondent has a special affinity for Bowie’s January 8th birthday, as it’s also his own birthday, as well as of Elvis Presley – Bowie was a big fan of The King, including not only going to Elvis’ 50th birthday performance at Madison Square Garden, but also using it as a model for his own 50th birthday MSG show – Shirley Bassey, Monty Python’s Graham Chapman, Stephen Hawking, and many more…]

A Bowie Celebration was not just a one-off for this birthday, but had been a regular touring event since Bowie’s passing (QRO live review of 2019 Los Angeles stop). However, COVID has put a stop to so much touring, including unfortunately this. But Garson turned lemons into lemonade, not only getting back together the touring A Bowie Celebration band (including Bowie vet guitarists Charlie Sexton & Gerry Leonard and bassist Carmine Rojas, with back-up singers Kitten Kuroi, Maiya Sykes & Jules Galli, who were too good-looking to be back-up singers…) and many of the tour’s guest singers, but recruiting a murder’s row of new guests (there was even a string quartet, The Section Quartet). Admittedly, many of those new guests were via screens, not sharing the stage with Garson & co., and the whole event wasn’t live, but that’s this day & age. The livestream premiered at 9:00 PM EST, 6:00 PM PST, seemingly for the American audience, but there were quite a number of Brits in chat at what was 2:00 AM GMT for them – and it all was up for 24 hours afterwards.

[note: your correspondent started watching live, but after some freezing issues that were probably just his own WiFi, tried refreshing and was frozen out. But Rolling Loud Support was able to get him back on later, and he caught the whole thing in rewatch]

The set up would usually see Garson introduce both a song and the guest artist(s) playing it, remaking on their connection to Bowie, whether it was as a contemporary, someone Bowie was a fan of, or a young act obviously influenced by Bowie. It was notable how diverse the lists of guests were, from the classic rock of Def Leppard to the young glam of Walk the Moon, reaching international (such as Guatemala’s Gabby Moreno) and across races (Afropunk legends Living Colour) and genders. There were even some Hollywood celebrities thrown in, like Evan Rachel Wood (who had been on the last Celebration tour) and Gary Oldman, plus Ricky Gervais telling stories of meeting Bowie.

Like David Bowie’s long list of songs, it’s hard to pick out stand-outs among all the stand-outs. Walk the Moon presented themselves very well, starting the show with “Fame” and later doing “Golden Years” and “Under Pressure” in twenty-first century glam style (and were boosted by actually being in-person with Garson & co.), singer Nicholas Petricca’s hair high and striped tie long. Living Colour were also in-person (singer Corey Glover had been on the tour) for back-to-back “Young Americans” and “Afraid of Americans”, the former killer soul-funk that Bowie also mastered, the latter the harder edge of Bowie (and of the genre-crossing Living Colour).

It was kind of notable that kind of the more famous the guest, the less likely to be in-person, but that meant that the less-known, but in-person, guests got to shine more. Gaby Moreno got to reprise her version of “Five Years” from the tour, the ultimate end of the world bringing tears to the eyes, so we knew she was not lying (though we didn’t get such a long notice – but R.E.M. also was wrong about how we’d feel…). She later sang “Time” with Sexton, who also got to do “Ashes and Ashes” (with video effects like that famed video) and late period Bowie “Lazarus”, those three more straightforward Bowie covers (Sexton couldn’t match Michael C. Hall doing Lazarus on tour, the livestream of which aired the prior January 8th – QRO review – but still good). Judith Hill celebrated the fiftieth anniversary of The Rise and Fall of Ziggy Stardust and the Spider From Mars with “It Ain’t Easy”, the tour’s Bernard Fowler came in off his world tour with The Rolling Stones for the sly & funky “Jean Genie”, and both of them for “Wild Is the Wind”. Joe Sumner (another veteran of the tour) sang early Bowie hit, “All the Young Dudes”. And Jake Wesley Rogers managed to combine all of Bowie’s personas on stage for hits-among-hits “Modern Love” and “Life On Mars”.

Notably, the Hollywood big-shots came in person, with Gary Oldman stopping by for the giant, resigned tragedy of “Slip Away”. Evan Rachel Wood brought a surprise of the night, “As the World Falls Down” from Labyrinth, Jim Henson’s cult classic with Bowie starring – and was herself surprised by a Labyrinth worm Muppet on Garson’s piano, then later talking Labyrinth with Garson and famed Muppeteer puppeteer Frank Oz. On the other hand, Ricky Gervais filmed in his segments about meeting Bowie seemingly from his home computer, and while they were funny, particularly how Bowie’s scene in Gervais’ Extras came about (song included), not that needed, and a bit indulgent for Gervais.

A Bowie Celebration did handle most of the beamed-in performances well, integrating them with the in-person musicians. Billy Corgan – or, as Garson noted him knowing him as, “William Corgan” – of The Smashing Pumpkins sang in an old TV atop Garson’s piano for a suitably (space) operatic rendition of “Space Oddity” from the “Spaceboy”. Def Leppard had their first performance in two years, all four members on separate screens, for “Drive-In Saturday” (though not needed earlier was singer Joe Elliott’s Bowie tribute piece “Goodnight Mr. Jones”, the only non-Bowie song of the night – if you’re gonna do a Bowie tribute song, better Flight of the Conchords’ “Bowie In Space”…). Duran Duran’s Simon Le Bon & John Taylor busted out “Let’s Dance”, because of course the iconic eighties dance band would. Noel Gallagher had his own arrangement for “Valentine’s Day”. And Rob Thomas closed the livestream out on a stage of his own with “Changes” and “‘Heroes’”.

It was notable how much the various guest stars enjoyed performing David Bowie’s songs. Often, while musicians came up covering their favorites, it can be tough to do so live in front of people, since you can’t be as good as the original, and it can be hard to do anything differently. But this was a celebration, and they were playing the songs just as the loved to play them, whether on a giant stage, in front of camera, or as a kid in their bedroom. There were some pieces that were changed, such as Gallagher’s “Valentine” arrangement, and Garson’s own jazz arrangement of “Starman”.

In the internet age, every artist has a second, third, fourth, and posthumous life (Let It Be was recently dominating conversation…), and we know about every death, from Sidney Poitier to Bob Saget. Yet Bowie’s 2016 death hit particularly hard (one meme trending on his birthday was, “I’m not saying that David Bowie was holding the fabric of the universe together, but *gestures broadly at everything*), and his music has particularly lived on. Undoubtedly that’s from how much it stretched in styles & genres (“His reach is wide,” Michael C. Hall – QRO interview), not to mention, you know, it being so good. But also, how much it was loved by me, you, and every musician you love.