A New York Evening with Stromae

Days prior to two Madison Square Garden dates on his Multitude tour, Stromae treated an intimate audience to “A Night With…” at National Sawdust, in conjunction with the Grammy... 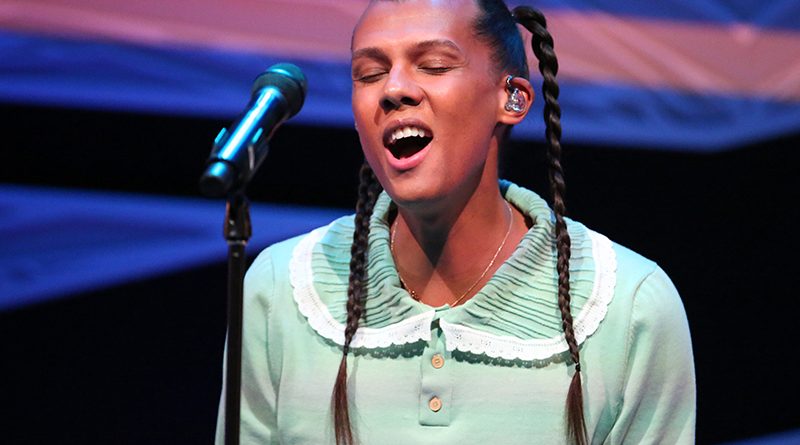 Click here for photos of Stromae at Terminal 5 in New York, NY on September 20th, 2014 in the QRO Concert Photo Gallery

On Thursday, November 17th, days prior to two Madison Square Garden dates on his Multitude tour (QRO photos), Stromae treated an intimate audience to “A Night With…” at National Sawdust, in conjunction with the Grammy Museum. Fans were eager to hear about what the Belgian superstar had been up to between the release of Multitude earlier this year, and Racine carrée in 2013.

During a Q&A, Stromae revealed that he has since gotten married to his creative partner, Coralie Barbier, and revealed that they also had a son during his hiatus. “Now I’m a father. My beautiful wife gave me this beautiful baby boy… I just needed to live normal stuff, to get inspired again and to tell new stories and, yeah, to have something to say, actually.” When asked if he always knew if he was going to make a comeback, he replied, “Sometimes you just need to say maybe never, even if I never say that permanently, but I had to say it to myself, and actually, no, that’s my way of expression, I need to make songs and I need to sing and that’s the way I live.” It was while writing the track “L’enfer” that Stromae knew it was time, his wife hearing the track and exclaiming, “My husband is back.” That didn’t mean throwing himself into his art, however. He stressed the importance of taking care of his family during the process, working on Multitude on a nine to five schedule to take care of commitments, like taking his son to the nursery. “Family life is more important that the rest. The rest is just, it’s a passion, it’s my job but it’s not my entire life… It’s really important for me to have a more balanced life.”

Moving on to Multitude, Stromae spoke about the cumbia inspired “Santé”, a celebratory song, “For the ones who can’t celebrate, who are working while we are partying,” such as blue collar workers, and specifically, his house cleaners Rosa and Alberto, namechecked in the song. He cited Latin music as one of the many worldwide influences on the album, but noted that he was, “A little bit tired of the groove of Reggaeton music,” and wanted a different groove, being inspired by DJ Alex of Argentina, electronic cumbia from Mexico and baile funk. Family life comes up again when discussing the track “C’est que du bonheur”, which Stromae says is a song about fatherhood and a declaration to his son, the song opening with the lyrics, “I give you birth and you save my life.”

Stromae also mentioned influences from pop culture, noting “La Solassitude”featuring master erhu player Guo Gan, who played on the Kung Fu Panda soundtrack, “Fils de joie”including a samplefrom a Bridgerton teaser that he recorded with his phoneand the Love Island inspired video for “Mon amour”. When asked what he thought about audience language barriers in the U.S., Stromae got some laughs from the crowd. “It’s funny because we do the same with English speaking singers in Europe, we don’t understand a word but we just say, ‘Blah blah blah blah,’ and it’s funny to see people in the front row saying, ‘Blah blah blah.’ I don’t have to look at them because otherwise I know I’ll forget my lyrics. It’s funny and I love that, and it’s just music. Music is international and it’s not a question of understanding. It’s just a question of feeling and emotion and it’s not a question of language.”

He then spoke briefly about his video making process with creative team Barbier and brother Luc, and his clothing line Mosaert, which he took care to note was designed by Barbier and not him (and teased a new collection soon), as well as his fashion sense, being inspired by frilly English clothes, African works and folklore, noting that he initially wanted to call the album “folklore,” but he had been beaten to it by a certain pop star. After some audience questions, Stromae and his band gave a short but energetic performance, letting the audience know we could stand if we wanted (we did, and did). The small stage and close quarters didn’t hinder him at all, with Stromae leading us in dance and interacting with the audience. From the first note, it was readily apparent as to why international audiences have come to love him.