<img src="http://www.qromag.com/wp-content/uploads/2012/02/aplacetoburystrangersonwards.jpg" alt="A Place To Bury Strangers : Onwards To the Wall EP" /><br /> It's safe to say that A Place to Bury Strangers have become the Kings... 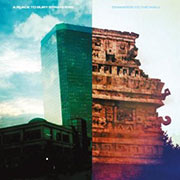 It’s safe to say that A Place to Bury Strangers have become the Kings of New York noise rock.  Over the last five years they’ve created a distinctive shoegazing sound made of floating, distorted melodies, hammering drums and frantic bass, overlaid with layers of feedback and screaming noise.  But in spite of the sonic madness, their instruments never fall apart, and every chord and squeak has its place.  There is a meticulous perfectionism in the maelstrom to the point that frontman Oliver Ackermann went as far as creating his own pedals and founding the effects company, DIY studio, and performance space Death by Audio (QRO venue review).

Onwards to the Wall is their 7th EP, and the first one with the band producing, mixing and mastering themselves on new label Dead Oceans.

Instead of trying to explore different directions, they perfected their style creating songs that are more precise, catchy, and that incorporate a wider range of styles, adding a garage rock vibe to their more ‘classic’ influences such as Jesus & Mary Chain, Bauhaus and NIN.  Some credits for that should go to new bassist Dion Lunadon who comes from a garage-indie background (The D4 and The True Lovers) and whose astonishingly persistent, thunderous bass brilliantly complements Ackermann’s morose, haunting vocals and wailing guitars, and Jay Space’s weighty, pounding drums.

The EP opens with the squalling “I Lost You”: its screeching guitars, industrial siren-drone and sullen vocals catapult the listener into an unsettling, hallucinogenic dream.  Lead single “So Far Away” is more structured, almost-hummable, bubbling with post-punk and ‘60s psychedelic influences.  It’s accompanied by a DIY video (link), created by Ackermann using a collage of his own Hipstamatic photos that feature kissing and driving sequences and a cameo appearance of the Pisa’s Leaning Tower.

The industrial, feedback-drenched noise and the crashing drums come back in the gothic “It’ll Be Alright”, before the dystopian tones of the closer “Drill It Up” bring things to a close with raw, cacophonic guitar and abrasive, fuzzy bass.

Don’t those five tracks make you want to ask for more?  Good news is that apparently the Brooklyn trio is currently working on their third album…