A Place To Bury Strangers : Worship

<img src="http://www.qromag.com/wp-content/uploads/2012/08/aplacetoburystrangersworship.jpg" alt="A Place To Bury Strangers ; Worship" /><br /> A Place to Bury Strangers have been through a lot of changes, and Worship is a step forward... 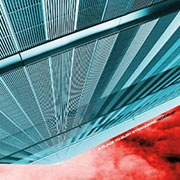 A Place to Bury Strangers have been through a lot of changes.  They recently signed to new label Dead Oceans on which they released the excellent Onwards to the Wall EP (QRO review) just a few months ago, and more importantly they completely changed their lineup: guitarist and vocalist Oliver Ackermann (QRO interview) is the only founding member left, now backed up by bassist Dion Lunadon (QRO interview), who replaced Jono MOFO a couple of years ago, and drummer Robi Gonzales who only joined the band in February this year.

And if at first listen Worship, their third album to date, features the same formula of shoegazing distorted melodies, haunting vocals and aggressive, almost cacophonic noises that made them so successful in the indie rock scene of the last few years, it’s in fact a step forward in their career.  The album was entirely recorded, mixed and mastered by the band at their own Death by Audio studio: every sound was made by APTBS using their own tools and effects pedals, created by them.  There is a meticulousness in the production of every noise and squeak, the record is more polished, and everything is precisely calculated but yet sounding altogether spontaneous.  In their earlier material, the vocals were drowned in wailing guitars and feedback, in style with the atmospheric noise-rock genre – now they are tracked noticeably above the bass and drums; they’re telling a story while still entrancing the listener.

New bassist Dion Lunadon (who now also co-writes) is extremely important to this album: the bass is more in the foreground, contributing to the melodies rather than just reinforcing the hammering rhythms of the drums like in their previous works.  Coming from a different background, the New Zealand garage-punk scene, Lunadon has brought new influences to the band.  What APTBS have managed to achieve so well on this album is genre defying in many ways, still maintaining their distinctive sound: they’ve taken inspiration not only from their beloved shoegaze, but also from psych-rock, post-punk, new wave, gothic rock and even grunge.  The whole record is more balanced, alternating fast-paced, engaging rock songs with more laid-back, melodic numbers.

Worship opens with the menacing “Alone” which features demonic drumbeats, angular guitars and Ackermann’s characteristic brooding vocals on an industrial background of thunderous, battlefield-like noises.  Following first single “You Are the One” is probably one of the best songs APTBS have ever written: a crescendo of paranoia-inducing tension that builds up over metal screeching, psychotic guitar riffs and sadomasochistic lyrics, to then collapse into a black hole of distorted feedback.  The haunting, bass-driven “Mind Control” is an eerie, propulsive three-minute number about obsession and submission, featuring interesting sounds, some of which are even reminiscent of Krautrock.

If the first three tracks of the album seem to be heavily influenced by the industrial music of Nine Inch Nails, the middle songs recall some of The Cure’s early works: “Worship” is a slow number of sludgy bass lines and more melodic yet still dirty guitar riffs; “Fear”, one of the gems of the record, starts with an overload of distortion that then opens up to swirling guitars, perfectly synched, matching bass and drums and Ackermann’s vocals at their warmest; “Dissolved” is an atmospheric Chameleons-esque, nearly pop number that kicks off as an ethereal, slow shoegaze to then pick up pace halfway through, almost becoming a different song.

“Why I Can’t Cry Anymore” wildly shifts the tempo and brings back the cacophonic wall of noise, the hammering rhythms and fuzzed-out vocals, also carried on by the seizure-inducing, industrial hysteria and feedback of the following “Revenge”.

Things become pop-ish again with new single “And I Am Up”, which features an opening foot-stomping rhythm and surf-influenced melodies, reminiscent of the garage rock à la Crystal Stilts (QRO live review).  “Slide” is a slow ballad of echoing electronics, dreamy, floating melodies and stunning Cure-esque guitar that somehow could have been the perfect album closer.  But again and for the last time “Leaving tomorrow” assaults the listener’s senses with a cascade of mind blowing noise and distortion, the fitting end to an often abrasive album, yet capable of spanning a range of emotions from longing to obsession and sadness.