<img src="http://www.qromag.com/wp-content/uploads/2009/10/aclday1recapsm.jpg" alt=" " />Day One of Austin City Limits Music Festival kicked off with a variety of acts. ... The Low Anthem has commented on their subtle sound’s inability to compete with the constant techno beat in ACL’s background (QRO interview), but their early morning set was the perfect start to the festival.  Much like their album, the set jumped seamlessly

between wild blues and delicate folk songs, oddly avoiding their most well known song, “Charlie Darwin”.  The Low Anthem plays without set lists, which is quite a risk considering their instrument changes between songs.  The band shows a rare form of unity, communicating in the subtlest ways who is supposed to be where and when.  They also revealed a slue of new songs they have worked on while on tour.

Click here for photos of Blitzen Traper at Pitchfork Music Festival 2009 in Chicago, IL in the QRO Concert Photo Gallery 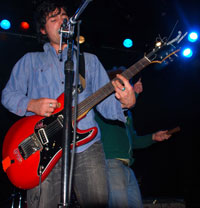 Blitzen Trapper is the modern equivalent to a jam band.  Their songs have that sing-a-long quality, but with the talent to give them longevity.  That being said, their show sucked their fans in and perhaps won over some passive fans.  Eric Earley’s gritty vocals soared over the crowd, permeating the audience in a way that only live shows can.

Much to the chagrin of fans of the older style of the Avett Brothers, they stuck largely to songs of the latest album I and Love and You (QRO review).  Their set may not have had the familiarity that many of the listeners would have hoped for, but duo’s energy was not lacking in the least.  The Avett Brother’s chemistry is an amazing thing to experience.  They perform with such warmth and care, and they bring you into the family with them.  The highlight of the set was the closing song, “The Perfect Space”, a personal favorite off of the new album.  The slow-moving song swells to break into the bouncy second-half that had skeptics of the Avett’s more polished sound running to buy the album.

Click here for QRO’s review of Phoenix at Paradise Rock Club in Boston, MA in June ’09

Phoenix attracted an overwhelming crowd, and, as lead singer Thomas Mars stated, was the largest crowd that they had ever played for.  While not necessarily a stellar show, the energy and obvious gratitude the band showed made up for technical flaws.  Mars even launched himself into the screaming crowd during an extended finale. There are no words to adequately describe Andrew Bird‘s shows.  The whir of activity on stage somehow produces his serene, whimsical music.  Bird hops about the stage recording violin loops, singing, frantically picking and whistling flawlessly.  While usually the background noise from competing shows can rally for attention during performances, a solid crowd of people was completely locked in to Bird’s craft.  Going with the fashion of the day, he played mostly songs from his latest success, Noble Beast.  It is not fair to name a song a particular highlight, but rather the show in its entirety was a standout of the opening day of ACL. Kings of Leon caught the attention of most of the festivalgoers, but a fair amount relied on the Yeah Yeah Yeahs as their closers.  Karen O is entertaining, music aside.  She flits about the stage, eating the head of the mic, throwing herself down on the floor, spitting water, and has costume changes to boot!  The show seemed to lose everyone’s attention towards the end, giving a weak musical closing, but an overall entertaining show.