Adam Slack of The Struts

In the run-up to the release of their made-in-lockdown record Strange Days, Adam Slack of the U.K.’s The Struts talked with QRO.... 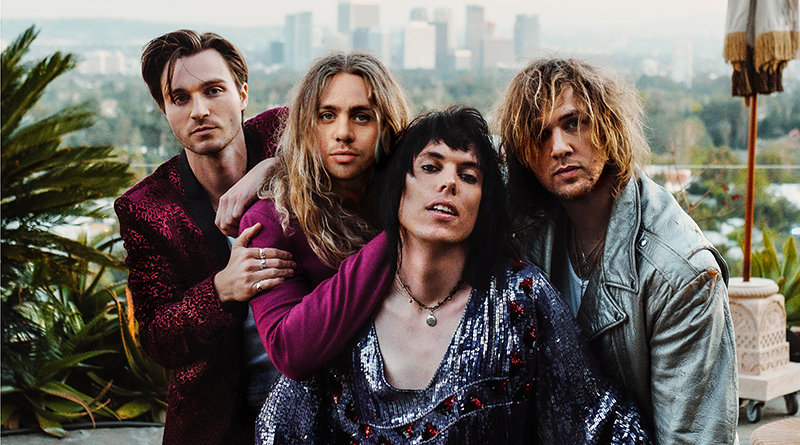 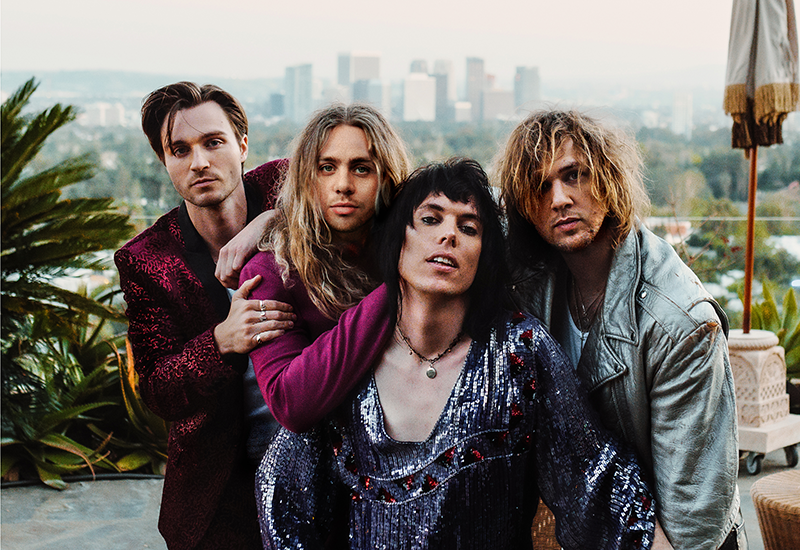 In the run-up to the release of their made-in-lockdown record Strange Days, Adam Slack of the U.K.’s The Struts talked with QRO.  In the conversation, the guitarist discussed writing & recording Strange Days in ten days of quarantine, recruiting the likes of Albert Hammond Jr., Tom Morello, Robbie Williams and Def Leppard to contribute to the new album (they didn’t have anything else to do…), not touring the tour-ready record, making a socially distant video, not shaving, shaving, and more…

QRO: How are you holding up, with everything that is going on?

Adam Slack: Oh, you know, just getting on with it, really.

You know, I can’t wait to go back on tour.

QRO: And how are your bandmates doing?

AS: I think they’re enjoying a bit of time with their families and stuff like that, which is nice.

QRO: Actually, how is the U.K. doing during this pandemic?

AS: Well, it was doing okay, but it’s looking like we’re might have to back into lockdown, because the cases are going up a lot. [editor’s note: new lockdown was put in place in the U.K. after this interview happened]

QRO: Has there been any specific government help for musicians & music venues?

AS: One of my best friends is a producer, and he got a grant from the government to keep him like tying over, whilst this is all going on.  That was nice.

But, I’m not sure about the venues.  I did see something like, ‘Music For’ something or other, but I don’t know if that’s actually been playing out to the venues or not.

QRO: At least you don’t have to worry about losing your health care…

QRO: When I saw you guys at Shaky Knees Festival in Atlanta, [singer] Luke [Spiller] joked about us Americans “paying for that shit”…

AS: [laughs] He did do that, yep!  When he got everyone down on the ground.

The actual problem with the coronavirus at the moment here is there’s not enough tests.

QRO: How was making Strange Days?

AS: It was awesome, to be honest with you.  It was the most refreshing way to make an album.

Cause we were coming off a tour, and then had a week & write the songs.  We literally just blocked ten days, and that was it.  Which was just really amazing.  The most creative I think we’ve ever been.

I don’t know why, but by day six, we’d written eight different songs, and one of them’s a cover.  We were writing two, three songs a day; it was just incredible.

We set everything up.  We went into [producer] Jon Levine’s house, quarantined there, slept on floors, studio in his back garden.  Yeah, we just set it all up.  Had the drums – just recorded the whole thing live, pretty much.

QRO: You did the record while on quarantine lockdown?

AS: Yes.  We all got tested for COVID, and then we all came back negative, so then we all went and self-isolated in April in Jon’s house.  So, we just didn’t leave, basically.

It was kind of crazy, but we wouldn’t have this album if it wasn’t for COVID.  So, that’s a nice thing, in a way.  One positive to come out of all this shit.

QRO: Had you planned on making record, or was it that COVID came, and you were like, ‘We can’t tour, let’s make a record’?

Cause we’d already started a record, and then – we didn’t scrap it, but we just started fresh, to see what would happen.

Luckily, now we’ve got another load of songs.  We could do another record maybe at some point. [laughs]

QRO: So, you wrote all of your songs in that session?

It was kind of crazy, but we wouldn’t have this album if it wasn’t for COVID. So, that’s a nice thing, in a way. One positive to come out of all this shit.

QRO: Wow!  How did you get artists like Albert Hammond Jr. or Robbie Williams to work with you?

AS: It’s just people that we’ve known over the years.  When we went up to make it, we’re like, ‘Let’s just ask everyone that we know if they want to be part of it.’

We’d met Tom Morello, he’s on the same management as us; we’ve written together, and he came on stage with us once.

Robbie is a fan of the band, and started getting to know Luke at the start of the year.

Def Leppard had been fans of ours, and so sweet to us.  We just asked them, and were like, ‘Would you want to be involved in a song?’, and they were very gracious to say yes.

And Albert, we played a couple of shows with in Oklahoma a couple of years ago, and just stayed friends since.

And just very luckily, everyone wanted to be part of it, which was awesome.

QRO: I supposed you knew that they didn’t have anything else to do…

AS: Yeah, exactly.  We knew they couldn’t make an excuse, because we all know no one’s doing anything… [laughs]

QRO: But I guess they all contributed remotely?

AS: Yeah, they weren’t in the studio with us.

Basically, we wrote the songs, and then we sent off the files, as it were, to them, and they kind of did their parts on them.

QRO: Could you all only get a few takes from each guest, given the constraints of time & lockdown?

AS: They just sent us all the parts, and all of them were perfect.

There was no going back and like, ‘Sorry, actually, we were thinking more of this…’

For me, anyway, I was just like, ‘Well, we were getting them on for a reason, and don’t want to start critiquing…’

‘Actually Tom, can you not play the guitar like that?…’  I think you know what you’re getting when you getting them on the song…

QRO: I was gonna ask, ‘How do you critique like Tom Morello on guitar?…’

When we went up to make it, we’re like, ‘Let’s just ask everyone that we know if they want to be part of it.’

QRO: Why did you decide to work with so many big outside artists?

AS: The original plan was, ‘Let’s make an EP for the fans.’  And then, the EP turned into an album, and then it was like, ‘Let’s just try and get as many…’

Because it was something for the fans, ‘Wouldn’t it be cool if we had these collaborations on it?’  Just something different.

I know we’ve done collaborations with like Kesha in the past, stuff like that.  But it was just kinda like, ‘Well, why not?  It seems like a fun idea…’  It was just a ‘Why not?’ kind of feeling.

To be honest, I think none of us really thought any of them would say yes.

QRO: Before [“I Hate How Much I Want You”] with [Def Leppard’s] Joe Elliott, you had the recording of Luke calling Joe.  Why did you make that the intro to the song?

AS: I think it was just kind of a bit of fun, you know?

Well, originally, because obviously we were writing the album, we had loads of voice memos on our phones, of us coming up with ideas.  And before that song, we did have like a little thing of us messing around on guitars.  Because the riff is like huge when it comes in, it was like a nice juxtaposition.

But then, the chorus was moved, it was like, ‘Let’s put that at the front of the song.’  You know, bit of fun.

QRO: And why did you include a cover of the KISS b-side, “Do You Love Me”?

AS: The reason we were going to do that, we asked Def Leppard.  Because [Def Leppard’s] Phil Collen used to be in GIRL, the cover band that covered the KISS song.

Basically, they were like, ‘Oh, we don’t want to do that song.  We want to do an original Struts song.’  Okay, Fair enough.

They jumped at the chance.

AS: If you’re doing a big hit, it’s like, everyone knows the original, so you’re always gonna have – not that against you, but it’s kind of more fun, doing a b-side.  Because then it’s like, ‘Oh, I never knew this was a KISS song.’  Or, ‘I never knew about this song.’  Kind of giving it an audience it didn’t have.

QRO: Are you bummed that you can’t immediately tour behind the new record?

Because some of the most fun music we’ve done, especially the rockiest, anyway, songs like “Wild Child”, “Can’t Sleep”, all have these moments.  These big rock songs, basically.  When we were writing & recording them, we were like, ‘Oh, this is gonna be so good live.’  Just knew.  It felt really good.

QRO: But was it almost bittersweet, since when you were recording you knew you couldn’t play them live?

Bittersweet, but love the album, so proud of it.  I think it’s my favorite one we’ve done, to be honest.

QRO: What about doing something for the release, perhaps on release day, like a livestream or a drive-in show?

AS: We did two drive-in shows around the 20th of August.  We did one in Philadelphia and one in Pittsburgh.  Which were great.  The setting… it’ll do.

Definitely looking into doing some livestreaming concerts, for sure.

QRO: You could have your guest-stars come in by Zoom or whatever…

AS: [laughs] Yeah, like Joe Elliott on his MacBook, screaming down the webcam.

QRO: Back in the before-time, how did opening stadium-size shows for the likes of Guns n’ Roses or Foo Fighters compare to your own, not-small headline gigs?

AS: It’s an honor to play with the amazing [acts].  But it can’t beat your own crowd.  Maybe 3% are there for you, the supporting band, and then the rest of them are waiting to see the headliner.

It’s always an amazing experience to be playing to your own crowd.

QRO: How was making the video for “Strange Days”?

For reasons, Robbie had to be socially distance, so Luke just went over and filmed their bit together.  And then we went and filmed our bit, apart from when you see us together, of course.

Chris Applebaum, the director, was awesome.  He came up with this really cool idea for the video.  We just went out and shot it over a couple of days.  Went into the desert.  It was great.

QRO: But you were never on the set with Robbie Williams.  Were he & Luke?  Because I noticed they never seemed to interact in the video…

AS: They were, but obviously had to be six feet apart.  Socially distanced…

AS: So, I actually, at the beginning, I started a charity thing, saying, ‘I won’t shave until quarantine’s over…’ [laughs]

Put it this way: I did two months, and then I realized, ‘This is going to be a long time…’