A record that you’re gonna hear a lot of, and you’ll still enjoy.... 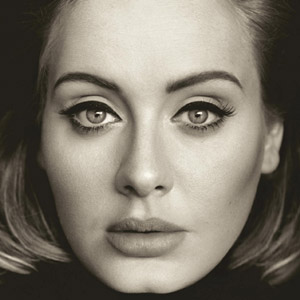 By now, you’ve already heard all about Adele and the phenomenal success that she’s had with 25. Her third record basically became the biggest album of 2015, with single “Hello” the song that everyone loves (there was even a Saturday Night Live sketch about that…). The album only giving up its top spot on the charts to the posthumous release by David Bowie, Blackstar (QRO review). And while it might not quite match the emotional power of that artist’s final act, there is a good reason that Adele is so loved at 25.

For starters, there’s “Hello”. Like “Rolling In the Deep” from prior release 21 (QRO review), the record starts with its hit single and starts very strong – almost too strong, as the rest of the record can continue to be “Hello”. It showcases the best about Adele, not just her voice (although that’s more than enough right there), but also her ability to be both epic and intimate. It’s quite something for an artist that can sell out six nights at Madison Square Garden (QRO venue review) in only minutes, in almost a year in advance of the shows, yet feel like someone you know personally.

It should be noted that much of 25 continues to mine this vein, though interestingly a little more distant from the break-up that made up 21. Multiple times she looks back longingly at her youth, which is a bit much for someone who’s only 25, but we’re all always older than we’ve ever been before (and she did just have a child). Still, this does mean that not every other track on 25 stands out. Best of ‘the rest’ is the Caribbean a cappella behind “Send My Love (To Your New Lover)”, wistful “When We Were Young”, and the almost Spanish southwestern torch song “Million Years Ago”. And the singer does brighten at 25’s close with the grand explosion of “Sweetest Devotion”.

It has already been said that Adele is a welcome counterpoint of relief to the manufactured pop-models and dance tracks that seem to dominate popular music, with a relatively genuine public persona. The sadness on 25 thankfully keeps up with that, making for a record that you’re gonna hear a lot of, and you’ll still enjoy.