Adele came across the pond and flipped the script for PC Richard and Son Theater. ... 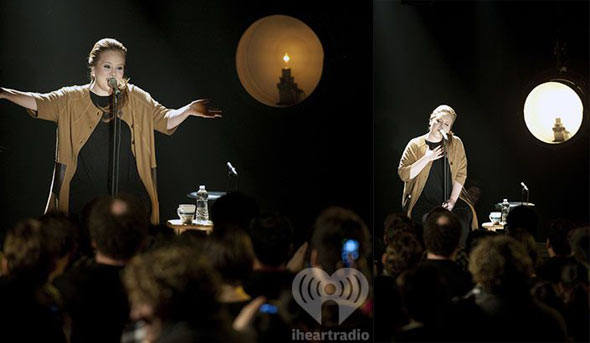 Usually at PC Richard and Son Theater (QRO venue review), artists come to the intimate studio-like space in New York to promote & play their new record, even if it isn’t out in America yet, and even if everyone’s there because of their last record.  In fact, the only non-new album material that the artist will play will be a cover that they’ve never done before, requested by ClearChannel Radio to give them some exclusive content, broadcast on iheartradio.com, the organizer of events at the Theater.  But when Adele came across the pond on Friday, February 11th, she flipped the script by playing both new & old material, and covers that weren’t her fist time. 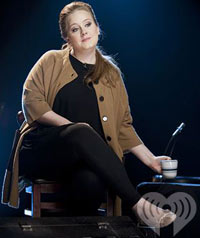 21, Adele’s follow-up to her breakthrough debut 19, isn’t out in the States until February 22nd, though is already out in Great Britain.  But Adele opened with her first-ever single, 19‘s “Hometown Glory”, with just her and her pianist, lit by candle-like lights behind them and floodlights in front of them (this was for broadcast, so needed good lighting).  It was a decidedly stripped-down show nearly throughout, with a quiet and respectful crowd during not just 19 pieces but also 21 numbers such as the following “Don’t You Remember” & “Turning Tables” – and laughing at Adele’s recounting of giving up smoking, caffeine, and more (including tomatoes?…), “Now I just moan…”, before admonishing herself, “What a stupid, boring story…”  While her singing voice (maintained by no tomatoes, apparently) is big and bossanova, she speaks in the charming Londonism of the likes of Kate Nash (QRO interview). 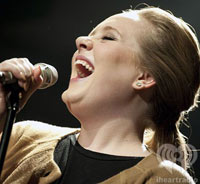 The minimal instrumentation (something else relatively unusual at PC Richard and Son Theater – similar-style British lass Duffy, who Adele beat out for the 2009 Grammy for Best New Artist, had a whole orchestra behind her – QRO review) helped shift Adele from the sometimes over-maudlin ways she can get into on her sad songs, but it also limited her almost entirely to just her sad songs.  That did include her hit 19 single “Chasing Pavements” (to much applause) after her longtime guitarist joined her, as well as her covers of The Cure’s “Lovesong” & Bob Dylan’s and “Make You Feel My Love” – the former on 21, the latter on 19.  No one can really improve on The Cure’s classic piece of heartbreak, Robert Smith at his finest, and it takes a Jimi Hendrix to improve on Dylan 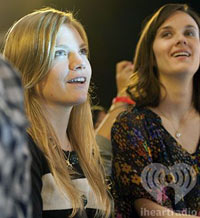 (maybe The Specials), but Adele was able to make both pieces her own, without losing either original’s power.

Adele did close with new, original material.  “Someone Like You” she called, “My favourite song I’ve ever written”, and it was stripped even for the stripped night.  Still, Adele ended with at least one big piece, 21 opener/first single “Rolling In the Deep”.  There was something missing without the horns & such, but the bossanova got bluies-ier, including a down home clap-along from the crowd. 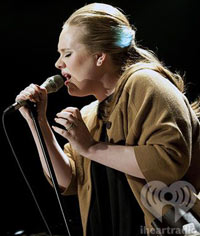 Adele won the not only the 2009 Grammy for Best New Artist, but also Best Female Pop Vocal Performance – and maybe we have to start taking those awards at least a bit seriously after Arcade Fire’s The Suburbs (QRO review) won for Album of the Year on Sunday (and Justin Bieber didn’t for Best New Artist…).  Certainly her voice can carry both new & old material, like at PC Richard and Son Theater.