Have you just gone through a horrible break up? Sucks, doesn't it? Well, fret not; Adele has come to your rescue once again for your bleeding heart. ... 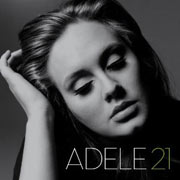 Have you just gone through a horrible break up?  Sucks, doesn’t it?  Well, fret not; Adele has come to your rescue once again for your bleeding heart.  The British songbird’s sophomore album is a perfect album while you burn old photos of your ex lover and plan to key their car.

It seems that Adele really has found her niche in writing painfully beautiful songs about love gone awry.  Using her own recent heartbreak as the catalyst for her recent album has resulted in eleven tracks that are filled with pointed lyrics and Adele’s soulful voice.  21 is the follow up to Adele’s debut album 19, which earned her a Grammy.  Adele proves to be more than a one-hit-wonder.

The first single “Rolling in the Deep” is a perfect way to kick off this album.  With the enthralling stomping, clapping and gospel sound, Adele beautifully belts out about a love gone wrong.  As a woman scorn, she powerfully proclaims, “You’re gonna wish you had never met me.”

“Don’t You Remember” has a surprisingly pleasant country sound to it.  When you think about it, dabbling with this genre makes sense for Adele.  Who know heartache better than country music?  Just like Patsy Cline before her, Adele’s fragile heart makes for a good punching bag.  “When was the last time you thought of me or have you completely erased me from your memory?  I often think about where I went wrong,” Adele sings.

Easily one of the best tracks off the album is “Turning Tables”.  The thing about Adele’s voice is that she really doesn’t need a vast production to carry it, she just needs a simple piano to shine and “Turning Tables” does the trick.  Her voice is such a vulnerable combination of fragile and power.  There is so much emotion in her voice as she sings, “Next time I’ll be braver / I’ll be my own savior standing on my two feet,” that it sounds like she is almost going to break which makes you connect to her pain.

It has yet to be seen if Adele can be as powerful as she is when she is happy in love.  However, until that time comes we will just have to savor the angst love has caused me nothing but pain Adele.  And there really is so much to savor.

The Radio Dept. : Live in Denmark