What we had at the Bodega were two bands that are still at the chrysalis stage of evolution, but already have that mischievous sparkle and charisma that has shone... 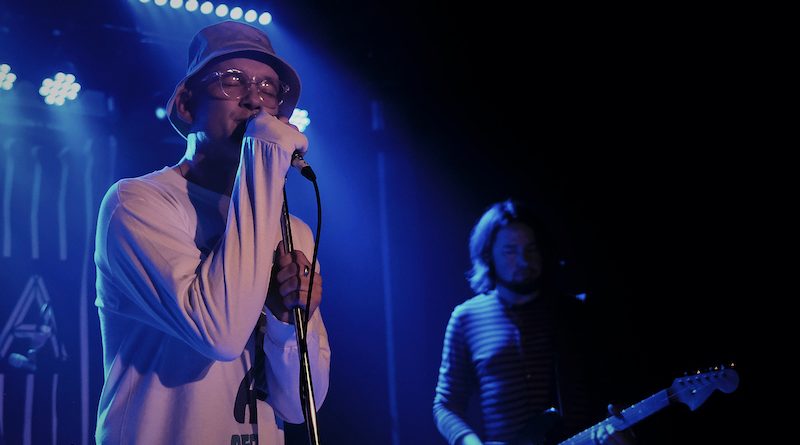 Let’s face the fact that the Indie/Alternative/underground… whatever moniker you choose, has hit the buffers of originality and ambition, with any desire in that direction being deemed to be the anathema of what the movement should aspire to. The scene has arrived at a comfort zone milieu where it wears its art on its sleeve and its angst on a trendy lapel badge. Where are the bands who, “Want the world and want it now?” A question posed by the late James Douglas Morrison over 50 years ago but is even more relevant in today’s sterile apathetic quest for the apogee. In recent times there have been loudmouth frontmen and other aspirational band members who have famously demanded chocolate brown Rolls Royce’s and gazillions of dollars, with no desire to be on the cover of rock magazines and were more likely to crop up on the cover of the tabloids due to their shoddy outrageous lack of respect for conventional behaviour. What is needed is a reaction to the politically correct self-satisfied po-facedness of bands like Muse, who agreed have created an untouchable body of work that could easily be filed alongside the Encyclopaedia Britannica, unlike some of the notorious band’s formed at the same time who were more at home alongside the top shelf pornography.

What we had at the Bodega club in Nottingham on Sunday, the 12th of September, were two bands that are still at the chrysalis stage of evolution, but already have that mischievous sparkle and charisma that has shone through in their limited musical output and even less media exposure. The two bands are on the aptly named “Spirit of Spike Island” record label, with the named event being the nadir of the then so-called Madchester movement, with both bands seemingly immersed in the style and mythology of an era which none of them were even born during never mind being old enough to witness first-hand.

First up were Pastel, whose interpretation of the so-called Nu-Madchester movement has been a rapid evolution from a Ride like shoegaze sound into something more akin to the ecstatic pop of the early Stone Roses. The formative skin seems to have been shed very quickly epitomised by the non-appearance of their first single “She Waits For Me” in the live set. The band’s visual dynamic was provided by the cousins Jack Yates on vocals and James Yates on rhythm guitar and added percussion, both of whom have enough charisma and attitude to fill the stadiums that they are already bound for. The short yet vibrant set allowed all five members room to shine, with Joe Anderson on lead guitar already laying claim to the guitar hero throne long since vacated by John Squire ending on the already designated classic, “Deeper Than Holy” (QRO review).

Afflecks Palace, named after an eclectic clothing emporium in Manchester’s Northern quarter, have totally deconstructed the old Manchester sound and have re-built it with more than a dash of the post Floydian psychedelia and bohemia from the North west of England’s other musical mecca namely Liverpool. The La’s and especially The Coral can be detected shining through the swagger and sway of their blend of Manchester arrogance and California dreaming with lead vocalist James Fender assuming an almost Bez-like centre of attention with his own brand of Freaky Dancing. The band’s progress has been more of a fine tuning of their original template rather than any radical change in direction with the latest single “Carpe Diem” and “Forever Young” exemplifying their undoubted song writing craft.

Both bands are on the cusp of radically changing the current musical landscape with a vitality and zest that has been conspicuous by its absence in recent times and with this particular groovy train  about to depart the station for new horizons ensure you don’t get stranded on the platform as it could again be another 30 years before the next one pulls in.