Afflicted Man – I’m Off Me ‘Ead

The problem with a record like I’m Off Me ‘Ead is that there’s just no way to understand what it was like to have heard this in the context... 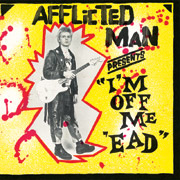 The problem with a record like I’m Off Me ‘Ead by Afflicted Man, a.k.a. Steve Hall, is that there’s just no way to understand what it was like to have heard this in the context of the end of the English punk explosion when this was originally released in 1980.  The sound of I’m Off Me ‘Ead deliberately attempts to bridge the gap between nihilist punk and psych prog-rock combined and then combines it with the very dawn of ‘80s nuclear paranoia.  Today it’s hard to hear this meaningful breakthrough in light of countless bands that also reached or borrowed this same conclusion.  But the evidence is here, a document simultaneously of its time and also shattering it.

The opening track “For the Few I Please” has the thin sounding raw crunch of desperation and loneliness.  The psych aspects of Afflicted Man show up in the excessive use of echo getting lost in its own repetition.  Everything about this recording gives away the no budget circumstances and this lyric about “underground music” basically says it all.  You can’t manufacture sentiment like this, you have to create it or be lucky enough to come across it.  The guitar skitters around and piles on waves of four chord patterns, slightly off because they had one shot to capture this on tape and it can’t ever go according to plan.  The tape warbles in and out of fidelity, but these underwater thudding drums and scattered messy vocals are the best part.  It has the same kind of sincerity and surefootedness as “Roadrunner” from The Modern Lovers.  A document so uncool and stumbling that ends up saying more than if it were trying.  “For The Few I Please” is an epic theme song, an anthem about the beginning of a new scene.

The album’s title, I’m Off Me ‘Ead, says it all.  Make no mistake, this is English with a capital ‘E’ and the second track, “Survival In the ‘80s”, is about that full blown identity crisis going on in England in the late seventies.  It’s the document of another punk searching for identity.  Afflicted Man is trying to figure out his place in this bashing track about survival, and given the album was released in 1980, it’s also predicting the future.  “You must stay together in a pack,” Hall says.  The future is bleak; the next generation has rejected the past and now the future.  Youth culture in late ‘70s England swung so far in the opposite direction from the free love ‘60s that the entire country was terrified by their nihilism.  The reality landed somewhere in the middle, but in the dawn of the ‘80s there was only one way to see tomorrow: a post-nuclear fallout, road warrior apocalypse was coming.

“Dustbins” uses a primitive drum track and inspired guitar playing with real flair and washed out soaring notes.  Hall wanders into a ‘70s progressive style of extended suites, not supporting the lyric melody, which is solidly locked to the drums and right on top of the mic.  His delivery is completely paranoid, even creating his own vocal effects by repeating the end lyric quieter and quieter as if it was fading out in delay.  A perfect example of DIY improvisation that only makes this better.  The idea of a dustbin as a place to collect destroyed and cast off possessions is a perfect metaphor.  Afflicted Man found himself in the trash without a future, but in a stroke of punk genius took this pedestrian idea of a trashcan and equated it with life’s problems.

“Things Start To Slowly Fall Apart” wails away next in a near free jam.  The future was bleak and wasn’t about to adhere to punk ideals of fast and short.  Afflicted Man was exploring the *gasp* hippie side of punk through bendy guitar solos and changing riffs measure after measure, fingers reaching every fret.

On “It’s Too Easy”, Hall’s forcing extreme psych into nihilistic punk, and extreme delay works great for both.  The melody is distanced from this bass line and drums, feedbacking and bouncing across the horizon with massive crunch and delay.  His exploratory guitar is slow and stumbling like the ramblings of a madman, but this vapor trail lyric is used to great effect.  The distorted vocals are what you’re supposed to get off on here.  It’s an imperfect document, appreciate it for the lack of polish or hold it against the available technology.

“Crazy ‘Ead” goes as far as to explore synth-y bass lines or some real keys, a foundation for his extreme distortions and vocal delay.  The guitar crawls, seemingly in the middle of making a point, as Hall is exploring the squeal and sharp ends of his guitar.  It just can’t stop moving, like a shark, it’s got to play something to stay alive.  The track almost comes to a stop but in psych style there’s room for another minute or so switching this rhythm just slightly, hand on the fader, in some attempt to take over the stereo… and your ‘ead.

On the last track, “I’m Off My ‘Ead And So Are You”, Hall has gone as far as to include you in his groove blues beat and bass line.  His guitar is banished to the background while he repeats the title lyric over and over in a manic high John Lydon style.  “Who’s listening to you!?”, the ultimate doubt.  He repeats this lyric to a point of making this a self-fulfilling prophecy.

I’m Off Me ‘Ead walks the line between psych outsider and punk.  Tom Lax from Siltbreeze Records describes it perfectly as “Too freaked out for punks, too punked out for freaks.”  Any poking around online in various forums will inevitably lead to posts from Lance at Permanent Records in search of Steve Hall, and it looks like he finally got a hold of him.  This is no longer a rare, lost artifact at collector scum prices.  The effort of tracking down Afflicted Man himself for this reissue was done for fans of overlooked records like this.

Afflicted Man – For the Few I Please

Portugal. The Man – Live & Outside