<img src="http://www.qromag.com/wp-content/uploads/2009/09/afterthejumprecapday1sm.jpg" alt=" " />The first day (night) of After the Jump Fest wasn't quite what was expected - which was pretty much a good thing. ... 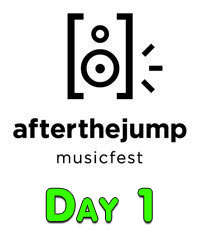 After the Jump is a collection of New York bloggers (currently numbering seventeen, including themusicslut.com and poptartssucktoasted.com) who band together to put on events, featuring some of their favorite undiscovered talent.  Most notable are their showcases at CMJ (QRO recap) and SXSW (QRO recap), but they also throw ‘After the Jump Fest’, a three-day Brooklyn event, this year at Park Slope’s new Littlefield venue (QRO venue review).  Friday-Sunday, August 28th-30th, saw twenty-two bands play Littlefield, and QRO was there for (almost) all of it.

Day One of After the Jump Fest was the shortest, because it was a weekday, running ‘only’ 8:00 PM – 1:00 AM, with five bands, all playing on the hour (roughly).  When you hear ‘Brooklyn indie-music bloggers’ these days, you kind of expect to see them put on a showcase of inscrutably art-rock and/or wild party-garage, but Day One saw some nice surprises: 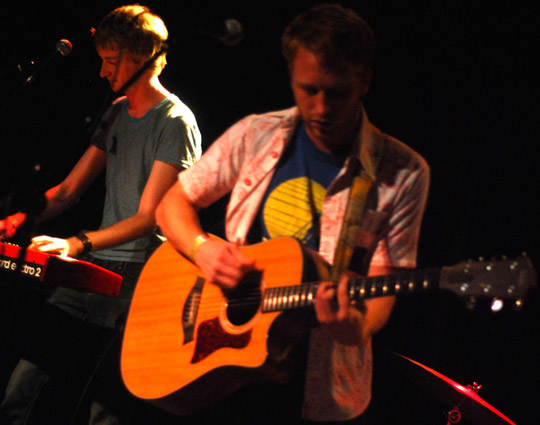 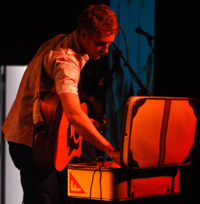 The first band of ATJ was not what you might have expected.  Instead of critic-fav art-rock or wild stage antics garage-rock, Dinosaur Feathers took an indie spin on calypso/gypsy styles.  They would have been better with a real, live drummer, as opposed to a drum machine in a suitcase, but one could see how it would be hard to drum along to their music (they did have to skip one song, because the computer track wasn’t working).  Their bassist got almost as little respect, stuck in the shadows – he couldn’t have moved one step to his right?  And it was worse when guest vocalist Hannah-something joined him on that mike. 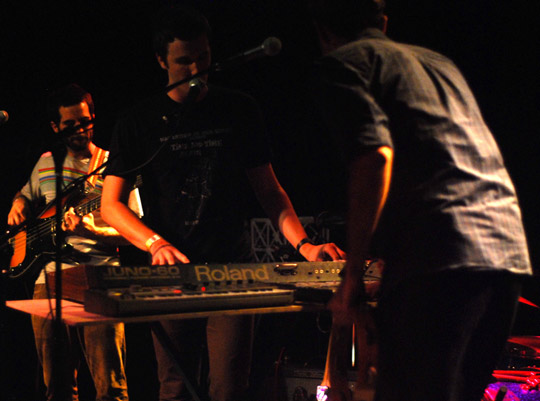 The sunny 60’s alt-pop Tallahasse’s Holiday Shores displayed on Columbus’d The Whim (QRO review) surprisingly played pretty well indoors, as it was given a chance to fill up the room.  The bassist did break a string at one point, and had to borrow a bass from another band – DIY style!  Catchy & enjoyable, they were another curveball thrown by ATJ (though still had the crappy stage-left lighting…). 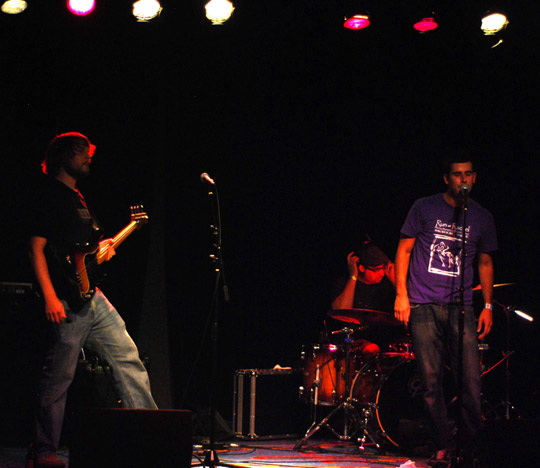 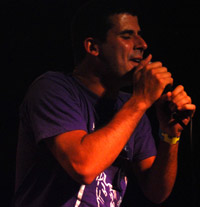 Thing One were reminiscent of the electro-ish, but not really, bands that played the Outdoor Stage at Brooklyn Electronic Music Festival (QRO recap), and just because one of those bands was named Jupiter One (QRO photos).  A little too mainstream, a little too much emo in the singer’s Jersey voice, this late add didn’t quite fit the bill. 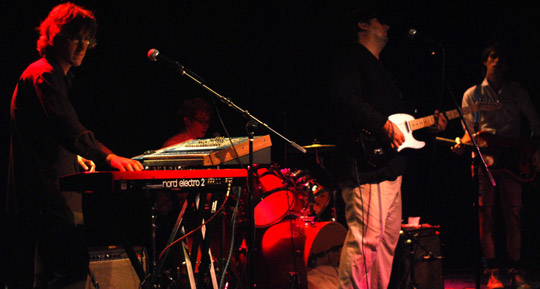 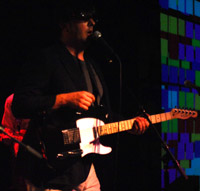 There are a number of ‘Teenage’ bands out there, but My Teenage Stride is decidely not made up of teenagers (at least, not the front-people).  Their indie-kid party/rock did sound ‘Teenage’, which made the age disparity more noticeable – especially as the singer/guitarist wore a sport coat (even the younger drummer wore a tie…).  While there was no real ‘headliner’ on Day One, My Teenage Stride were just about the closest thing, yet didn’t play to that many more people than anyone else that night – and even had people (person) incongruously sitting down in his own chair, up front (QRO photo). 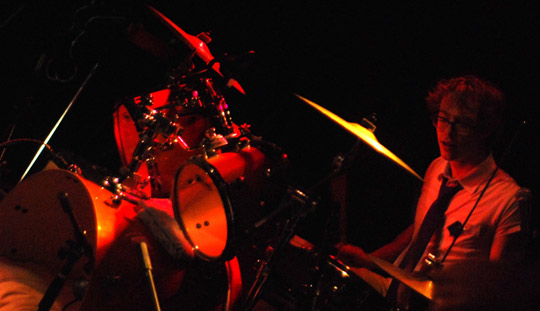 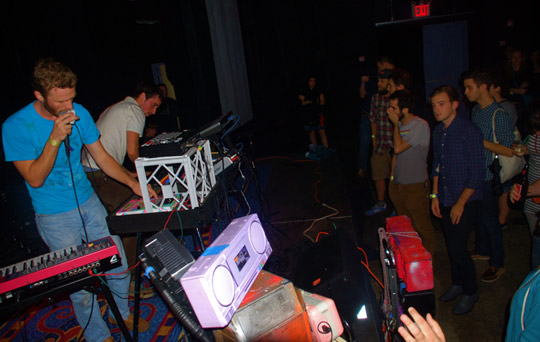 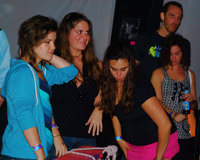 Electro-dance finished off the night, which was just about right, even if Javelin were more suited for the weekend, and a little mainstream.  But at least fit with the side-of-stage light show (see below), and even got some folks dancing… 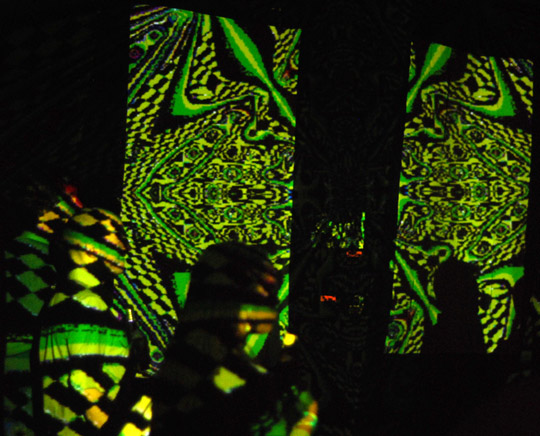 -While the lighting on the stage was sub-par, there was a great ‘trippy screensaver’ light show projected to the house-left.  In fact, it sometimes threatened to overshadow the already-in-shadows bands.

-One thing bloggers do know is the simplest hook to get people to show up, right at the start: free beer.  Free Brooklyn Brewery was on offer before the first band, 7:00 PM – 8:00 PM, but quickly ran out, so Miller Hi-Life replaced it.  Does color one’s view of the acts, especially the first one – Dinosaur Feathers (see above) naturally seemed great at first, but then seriously slid as one sobers up to the no-free beer reality.

-But even better than free beer (yes, such a thing is possible…) was the food stall, serving up Aussie burgers & ‘snags’ (like sausages in a half-hero) – served by Mark Simmons, the New Zealand contest on Top Chef, Season Four!  It great to get antipodean cuisine served by an authentic ANZAC celebrity chef (he’s from the southern-most tip of New Zealand, pointing down to Antarctica) – only person better would have been Flight of the Conchords (QRO live review).

-Some of the After the Jumpers were wearing costumery.  While two guys got stuck with the unenviable job of manning some painting table, shirtless in shorts with bibs & elephant masks, far better were those dressed like aliens – or mogwais: 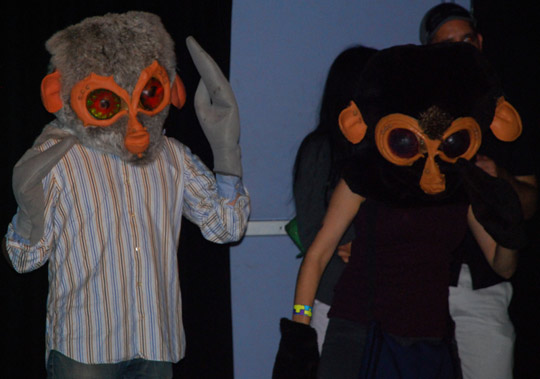