Laura Jane Grace has managed her transformation with grace, culminating in 'Transgender Dysphoria Blues', a record that is not only meaningful and powerful, but also catchy and enjoyable.... 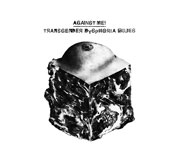 While Tom Gabel (QRO interview), frontman for Gainesville punk rock act Against Me!, had always been on the forefront of activism, it was still a major shock when he announced that he was transgender, and would be undergoing surgery to become Laura Jane Grace.  There are very few transgender individuals with a public profile, and even fewer who have been high profile before, during, and after.  Plus add in fronting a band in punk rock, which for all of its anti-establishment nature has still been one largely on the male side of the divide.  Yet Grace has managed the transformation with grace, culminating in Transgender Dysphoria Blues, a record that is not only meaningful and powerful, but also catchy and enjoyable.

Transgender could have easily been an insufferably preachy record, or a simple agit-punk one that relied on its source material for importance.  Indeed, Against Me! had come close to tiring out their agit-punk on their last release, 2010’s White Crosses (QRO review).  Yet Transgender is anything but ‘just’ politics, right from the start with the title track, which has an almost country rollick backbeat that makes this punk song catchy.  Time again, Against Me! exceed by being both enjoyable and meaningful, like on “Transgender”, the following transsexual anthem “True Trans Soul Rebel”, earnest yet rocking “Unconditional Love”, “Dead Friend”, and powerful procession “Paralytic States”.  There are a few ‘regular’ agit-punk pieces that don’t stand out (“Drinking With the Jocks”), and “Osama bin Laden as the Crucified Christ” is just heavy rock, but there’s also a glimpse at Grace’s acoustic side on “Two Coffins”.

Transgender Dysphoria Blues is naturally going to always be seen first and foremost a record about its subject material, considering the power of that material, and the scarcity of coverage of the topic anywhere near the mainstream.  But it’s much more.