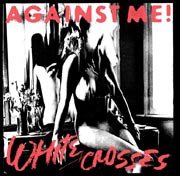 Many people went through a punk phase in their teenage years, not just in music, but also in politics.  But most end up leaving the scene as they get older.  People accused Gainesville, Florida’s Against Me! of doing just that, first when they moved to larger indie imprint Fat Wreck Chords in 2003, and then when they surged to the big-time on major label Sire with 2007’s New Wave.  Yet with sophomore Sire release White Crosses, the band actually gets younger, hewing to the emo-agit-punk of today’s kids, albeit with some workingman’s punk thrown in as well.  While you outgrew that sound even before you outgrew punk, it’s not unappealing.

White Crosses‘s title track kind of sums up the record, an up-anthem emo-agit-punk that isn’t saying anything new or special, but is certainly listenable.  Or take single “I Was a Teenage Anarchist” – is Against Me! decrying when one abandons the politics of the young, or saying it is necessary?  Do you really care about their opinion, one way or the other?  The band does it better on “Suffocation”, mixing indie-sustain with punk call, reminiscent of Ted Leo & The Pharmacists (QRO photos), and Against Me! never do their sound badly, just rarely stand out.

As opposed to their more straight-punk previous records, Against Me! borrow from two of today’s most popular kinds of punk on White Crosses, workingman’s and emo, for better and worse, respectively.  Workingman’s punk has been emerging as a solid genre on its own, and Against Me! give it a break-up song in “Because of the Shame”.  But while that song’s obvious emoting actually works in the refrain, the emotion takes away a bit from the up-look anthem “Bamboo Beans”.  And when the band focuses on the emo-heart, such as the acoustic sway “Ache With Me” or emo-grand “We’re Breaking Up”, the results are just as cheesy as those titles.

On “Spanish Moss”, Against Me! deliver a kind of emo-punk version of the Cheers theme song, and White Crosses definitely seems designed for wider consumption than just the punk rock kids.  However, it never feels essential, or even important, for any scene.  Even as it’s never out-and-out awful, it’s never special.

MP3 Stream: “Because of the Shame”

{audio}/mp3/files/Against Me – Because of the Shame.mp3{/audio}
Tags
Against Me!
Categories
Album Reviews
OLDER ARTICLE