<img src="http://www.qromag.com/wp-content/uploads/2010/07/agentribbonschateaucrone.jpg" alt=" " />There's a little bit of bait-and-switch going on here<span style="font-style: normal">, though you'll be hard pressed to figure out what's the bait and what's the... 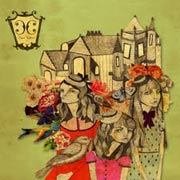 There’s a little bit of bait-and-switch going on in Agent Ribbon’s latest release Chateau Crone, though you’ll be hard pressed to figure out what’s the bait and what’s the switch.  The lovely ladies that make up this California-to-Texas trio do a lot of things well – from garage-surf ditties to Balkan gypsy rags – but can’t seem to make up their minds what sort of band they want to be.  That’s a problem of which most outfits would (and should) be envious.  On the other hand, the multifaceted fireworks smack a little too strongly of a "Look at me, Ma!" quality that, at times, makes the album sound more like a superlatively polished audition demo for an elite music school, not a pop album.

If you only heard tracks "I’m Alright" and "Oh, La La!" you might be fooled into thinking Agent Ribbons was a throwback ‘60s junk-pop band.  "I’m Alright" buzzes and belches with truck stop moxie reminiscent of Thick Shakes (QRO album review) while "Oh, La La!" tosses off the spare charm of minimalist ‘Wall of Sound’ songwriting.  Feisty, smart, first generation feminist balladeering.  Even the transition to 3/4 time in "Grey Gardens" sports that stripped-down, vocal-heavy, Mammas and the Pappas-type sound with lyrics to spook the squares like, "Catholic girls with golden tickets / Come out grinning from the thickets."

Not to be hemmed in by just one brand of nostalgia, Agent Ribbons opens up cabaret-style with "Dada Girlfriend", "Your Hands, My Hands", and the Broadway-song-waiting-to-happen "Born to Sing Sad Songs".  There’s a sense of theater here that exceeds the traditional boundaries of pop music.  You get the feeling that Agent Ribbons could have hired any studio musician schlep off the street to lay down the backing tune while the lead vocal cavorted hither and thither over the melodies, top-hat and all.  That’s not a good feeling.  When you begin to care less about any one part of a song, you begin caring less about the whole song.  By the end of Chateau Crone Agent Ribbons have probably sung their way through more lyrics than were contained in the last six R.E.M. (QRO album review) albums combined.  The lead vocal seems to self-diagnose with the apt line, "I was born to sing sad songs / That go on for more than three minutes long," though that doesn’t make it any less tiresome if you don’t like musicals.

‘Less is more’ is clearly the moral of this story.  The highs are high; but too much of the album is an overthought slush of time changes, horns, bells, whistles, violins, tambourines, accordions, overwrought drama, and silly numbers like the gypsy rag "I’ll Let You Be My Baby".  The song boasts the sort of loose moral standards that would have scandalized Middle American housewives in the first half of the 20th century.  But in the 21st century the joke is stale and, like most of Chateau Crone, misses the mark.