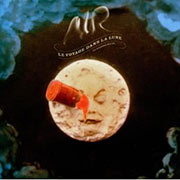 French duo electro has two distinct branches.  One is the raw path piloted by Daft Punk; the other, a refined, high-art championed by innovative duo, Air.  For the twosome, Jean-Bénoit Dunckel and Nicolas Godin, it has been a journey into some extraordinary sonic areas, as on the seminal Moon Safari (1998), 10 000 Hz Legend (2001) and Talkie Walkie (2004).  However, recently Air has struggled to produce consistent, interesting records.  Pocket Symphony (2007 – QRO review) metronomically sapped all its potential melodic joie de vivre, whilst Love 2 (2009) predominantly lacked originality.

Click here for photos of Air at 2016 Primavera Sound in Barcelona, Spain in the QRO Concert Photo Gallery

Click here for photos of Air at Fillmore Miami Beach in Miami, FL on March 13th, 2010 in the QRO Concert Photo Gallery

This is the risk that comes with producing such a focused, distilled sound – that music might come second to process.  However, their recent endeavor, Le Voyage Dans le Lune, is highly intriguing.  Inspired by the classic early 20th century French sci-fi film, Le Voyage Dans le Lune (A Trip to the Moon) by Georges Méliès, the Versailles couple has attempted to retrospectively provide a musical score to that 14-minute silent film.  In this regard, the project is a complete success, selectively condensed and timed to accompany the scenes and moods of the movie.  Where Queen re-imagined music to Metropolis, Air has done likewise for Méliès momentous film.  Pulsating, metallic rhythms and cosmological piano/synth melodies invoke an eerie mood of ominous exploration and futuristic adventure.  “Astronomic Club”, “Seven Stars”, “Moon Fever” and the groovy “Cosmic Trip” truly assist in creating such an atmosphere.

The film set to its accompanying score appears in a limited edition CD/DVD release.  As an expanded album, over half-an-hour in duration, the tracks wane in strength, since they lack their necessary filmic context.  As a short soundtrack, a set-to-film framework, it would achieve an 8.5-9.0; however, when the tracks are fleshed out in their entirety, they become structurally aimless and tonally repetitive.  In lieu of that, the scaled-down score along with the short film on the limited edition double disc is most rewarding and a remarkable achievement by the French electro outfit.