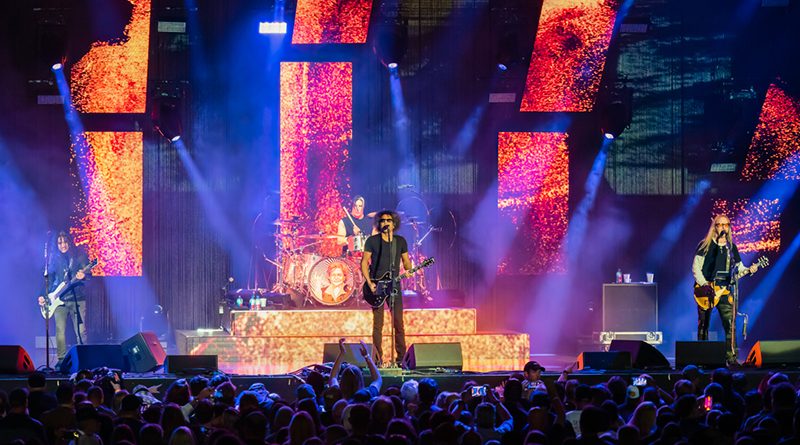 On Wednesday, September 28th, Ameris Bank Amphitheatre in Alpharetta, GA was swept away by Alice in Chains, Breaking Benjamin, Bush and Plush, these amazing bands that mark different parts of the alternative rock music scene!

The first opener was Plush, a band composed of talented young women that brought the energy of the new generations to many of the ‘90s folks by playing our favorite rock covers. After Plush, the veteran British rock band Bush took the stage. Gavin Rossdale and his band reminded us why they became huge in the first place. Rossdale’s infectious happiness was felt all through Ameris Bank Amphitheatre, when he ran through the crowd, going as far as the lawn area where many fans got to shake his hand and take photos with him. Bush played all of their hits including “Machinehead”, “Bullet Holes”, and “Comedown”.

Next was Breaking Benjamin. This band of Pennsylvanians brought all the big guns to their stage.Their show included amazing props and the always loved, pyrotechnics. Huge flames were bursting from the back of the stage and the heat was on! They played all their hits including “Blow Me Away”, “Breath”, “So Cold”, “I Will Not Bow”, “Red Cold River” and a very special acoustic version of Queen’s “Who Wants to Live Forever”. A favorite part was when lead singer Benjamin Burnley told the story of his first ever concert, which was Alice in Chains, and his second concert, Bush. “I am up here on stage living this dream with my heroes because of you. I can’t thank you enough,” said Burnley.

Click here for photos of Alice In Chains at Northwell Health at Jones Beach Theater in Wantagh, NY on August 6th, 2019

Click here for photos of Alice In Chains at Coca-Cola Rosy in Atlanta, GA on May 10th, 2018

Click here for photos of Alice In Chains at Cynthia Woods Pavilion in The Woodlands, TX on August 29th, 2013

Click here for photos of Alice In Chains at PNC Bank Arts Center in Holmdel, NJ on August 17th, 2013

Last was headliner, Alice In Chains (AIC). The crowd roared when the lights dimmed and the first notes of “Again” started to play. These guys are amazing live! The band consist of guitarists and vocalists Jerry Cantrell and William DuVall, drummer Sean Kinney, and bassist Mike Inez. William DuVall joined the band in 2006 after the death of their original lead singer Layne Staley in 2002. The band had cool light panels running at a 45 degree angle up the stage and around Kinney’s drum set.

DuVall crushed the lead vocals, bringing so much soul to the mic that clearly compliment Cantrell’s undeniable harmonies. As a long-time fan of Cantrell’s music, my eyes were set on his guitar, oh man, what beautiful gold top Gibson, Les Paul! Cantrell is the core of Alice in Chains, the lead guitarist, co-lead singer, and principal songwriter, one of the best guitarists around. The band played all of their hits, including “Man in the Box”, “Would?”, and ended with “Rooster”.