There are usually several tradeoffs between seeing a new band live compared to a more established band. alt-J provided the best of both worlds... 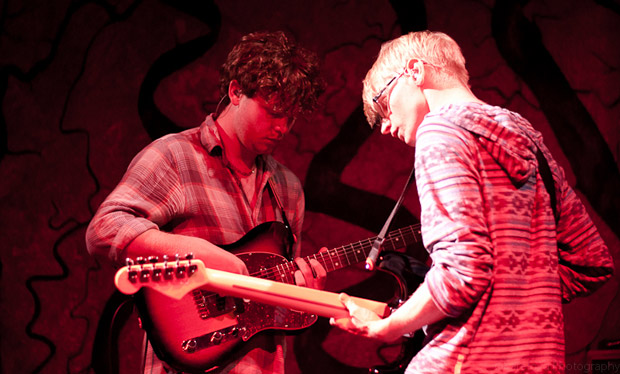 Click here for photos of alt-J at 2015 Landmark Music Festival in Washington, D.C. in the QRO Concert Photo Gallery

Click here for photos of alt-J at 2015 Boston Calling in Boston, MA

Click here for photos of alt-J at Beacon Theatre in New York, NY on November 16th, 2014

Click here for photos of alt-J at 2013 Governors Ball in New York, NY

Click here for photos of alt-J at 2012 Tramlines Festival in Sheffield, U.K.

Click here for photos of alt-J at Mercury Lounge in New York, NY on May 9th, 2012

There are usually several tradeoffs between seeing a new band live compared to a more established band.  If there is a deeper album cut that you want to hear, you probably will since they may need to play all of their songs to fill a set.  At the same time, that means that there are no surprises unless they play covers or unreleased material.  They may not be as polished, but there is usually more energy, etc.  When alt-J recently came to Headliners in Louisville on Tuesday, March 19th, they provided the best of both worlds.  They have spent around half of the time since the September North American release of their debut album An Awesome Wave touring the U.S., and played their first shows here a month and a half before the record was released stateside.  They have had plenty of time to work out the kinks and they came across as much more seasoned than one would expect from a band whose debut was within the last year. 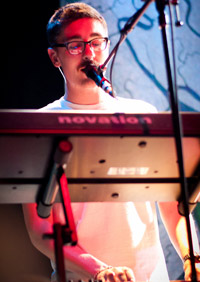 Starting the set with the first few from An Awesome Wave, they then jumped around the album, hitting their peak in the middle of the set with back-to-back highlights “Dissolve Me” and “Fitzpleasure”.  alt-J did give the crowd everything, playing each song they have released, including hidden track “Hand-Made” and soundtrack cut “Buffalo”.  The sold-out crowd erupted at the beginning of every song as they recognized it, and alt-J calmly managed the crowd’s energy.  Their music is mostly mid-tempo and the band’s physical presence was laid back, but never descended into shoegazing.  There was a palpable buzz in the crowd and the frequent grin of singer Joe Newman showed that he knew that he just needed to keep giving them what they wanted to keep it going.  This presence is not surprising given their sound on record.  They have the urge to experiment that comes with youth and they mix multiple genres, but the sparseness of their music displays a surprising level of restraint for a band so young, 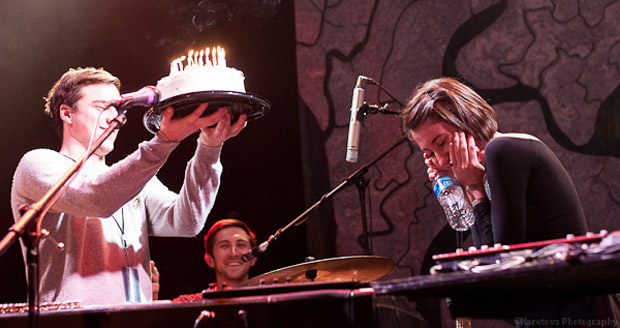 Photos of Hundred Waters at CMJ 2012 in New York, NY

Photos of Hundred Waters from this show

Opener Hundred Waters similarly mixed organic and electronic components into an eclectic soup, but they relied more on the electronic component, skittering and chiming along with singer Nicole Miglis’ gentle voice.  The highlight was drummer Zach Tetreault reminding locals that “Happy Birthday to You” was written in Louisville and then surprising Nicole by leading the crowd in singing it to her, cake and all. 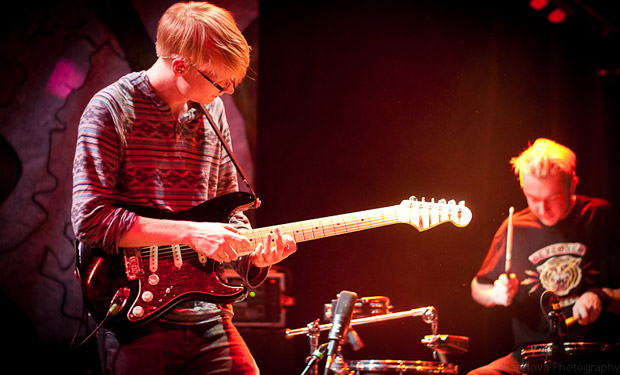 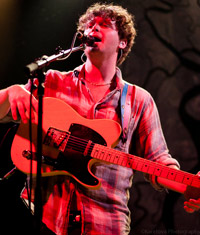 This transitioned well to the subtle playfulness of alt-J’s set.  They played everything, but alt-J still followed the command of leaving the crowd wanting more.  With a constant stream of dates around the world booked all the way to October, let’s hope alt-J can find time to work on more material.  If not, at least there will be plenty of chances for fans to scratch that itch live.