Nothing new if I say that the pandemic has caused havoc with festivals everywhere so it was very positive to know that one of the best proposals in Barcelona... 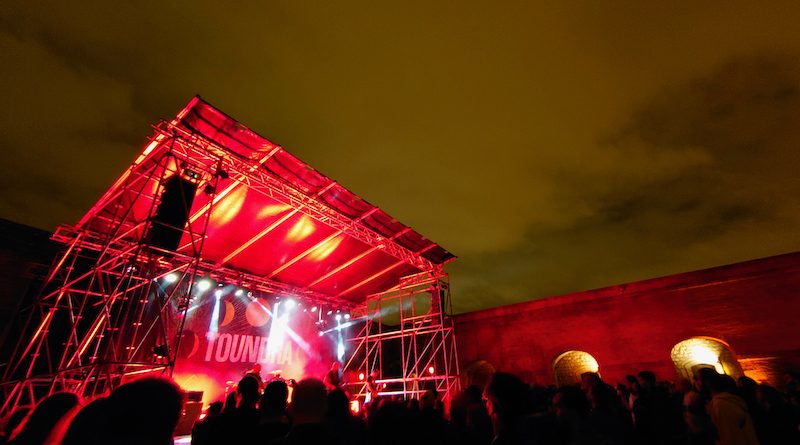 Nothing new if I say that the pandemic has caused havoc with festivals everywhere so it was very positive to know that one of the best proposals in Barcelona and Spain, the AMFest (which we covered in past editions), was creating a reduced version for 2021, called “(Parèntesi)”, Friday & Saturday, October 8th & 9th. This way, the organizers filled the void and the hunger for live music with their audience while preparing the full-scale 2022 edition.

The health issues we all have known about for the last 18 months prevented the festival to be held indoors, so they chose a picturesque venue instead: the military Castle of Montjuïc in Barcelona, a defense post now devoid of its military purposes. The main patio of the building was the location where all the action occurred, with six bands spread in two nights.

After two performances at the Primavera Club and the Primavera Sound, Basque post-punk outfit Vulk returned to Barcelona, with the difficult task of opening the festival.

Their branch of post-punk sounds like almost nothing classic but hints at the most embryonic Fugazi and the most obscure Wire or even Gang of Four, but as the songs went by the impression is that they are revisiting the urban, guerrilla punk of Basque antecessors Kortatu, even though it’s obvious their songs – such as “Vulk Ez Da”, “AModioa”, among others, and yes, all sung in Basque – are way more complex and you know where they begin, but never where they end. A worthy starter for the festival.

Galicia’s Bala used to sound like a mix between Melvins and DZ Deathrays. Not anymore. The duo is still displaying a bombshell of energy in their sets, but now they have moved on to a mix of grungy stoner rock and screaming metal that, even though it was very well-received by the audience, didn’t sound as polished or left a deeper impression as their earlier tracks. “Maleza”, released before summer, is their most recent effort if you want to delve into them.

The night ended with the only foreign band of the line-up, Belgians It It Anita.

Noisy, accelerated, urgent, blunt, theoretically they had all the ingredients to be the revelation of the festival yet they ended up sounding a Sonic Youth tribute band playing b-sides instead of the hits. Yes, tracks like “Cucaracha” or “NPR” sound well enough but no song seemed to make you go buy all their records.

Elle Belga, from Asturias (North by Northwest, Spain) were the outsiders of the festival.

They mixed the European singer-songwriter tradition with the savoir-faire of classics like Low. So, to fully enjoy their gig, the organizers asked everyone to shut up while they were onstage. But we’re in Spain, and that was impossible (yes, it was), but it was quiet enough not to get depressed.

Singing to freedom, euphoria, symmetry and love, they even left enough space for humour with a cover of The Smith’s Panic that Luna would’ve wanted to do. Not an easy band to get into, but their art is like fine rain: You got to leave it some time to sink in.

Madrid’s Bones of Minerva returned the festival to its energetic roots. Their blend of metal and hard rock seems like a safe bet in such a festival, but it doesn’t seem to offer much else. Even if singer Blue Rodríguez leads the band with strength and power, the majority of times she only seems to use her voice for singing very high or to screaming. Sometimes, her low, gothic voice feels warm and inviting, but soon the high pitch comes back, and most tunes end up feeling repetitive, no matter how much effort they put into them (and they put a lot).

The Festival ended with another Madrid Band, classic post-rock outfit Toundra. The band went through the different phases in their career, with gripping tracks like “Tuareg”, “Kitsune” or “Mojave”, and even though they also had the same problem as most of their peers in the “Parèntesi” fest (being kinda repetitive), the forced, partial retirement due to Covid didn’t affect them as they never sounded rusty or forced in the execution of their songs.

And the same goes for the rest of the line-up, no matter how many defects I found.

All in all, the AMFest people took a risk, and it worked. Now, let’s all hope “normality” comes back with a full line-up for the 2022 edition.

Christopher Paul Stelling – Forgiving It All