AMPERSOUNDS team up with Rufus Wainwright for their debut EP.... 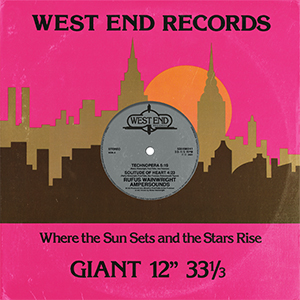 Legendary disco label West End Records can certainly have their pick of anyone they want to reissue classic tracks by iconic artists in their stable. They don’t choose you if you aren’t entirely built on a chassis of ravening creativity and relevance. That’s why they selected stand-out house DJs Fred Falke and Zen Freeman – known collectively as AMPERSOUNDS – to be the striking, intuitive selectors to throw some glitter garnish on a few new incarnations of Raw Silk’s 1982 underground hit “Do It To The Music.” As AMPERSOUNDS likewise collaborate only with only the cat’s cream, it follows that they then enlisted another aural authority with a Napoleonic scope – the unparalleled Rufus Wainwright – for an artistic assist in conjunction with two original tracks appearing alongside those Raw Silk reissues on their destined-for-your-dance-dreams debut release.

Whether you have been unavoidably in love with dear Rufus since “Dinner at Eight” and “Poses” or are just learning this second that he is one of the most important songsmiths of our time, his mythical, romantic vox on this first offering from AMPERSOUNDS will take you someplace you’ve not been before.

As of last year’s phantasmagoric Unfollow the Rules (QRO review) Wainwright now has ten spectacular albums of original music to his name – all of them brilliantly alive with his bespoke alloy of classical sophistication, pre-rock ethos in the vein of Stephen Foster Americana, the incisive verbal spectre of his folk-heroine mother (Kate McGarrigle), an unabashed tether to theater tunes, and a profound love of orchestration that aligns him as much with your local Philharmonic as it does with titans like Sting, who has described Wainwright as “utterly out of time and therefore timeless.”

Sometimes the character of a man can be almost completely and accurately summarized by the caliber of women he draws into his life. Though Rufus Wainwright definitely needs no feminine pillars on which to prop, it must be noted that his 2007 tribute performances of Judy Garland’s catalogue entitled Rufus Does Judy at Carnegie Hall drew vocal praise from the only woman truly qualified to give it, Lorna Luft, and that Lorca Cohen (as in Leonard’s daughter) adores him enough to have signed on as his only daughter’s birth mother. Wainwright inscribed his “Damsel In Distress” to Joni Mitchell and is forever in wondrous creative cahoots with his every-bit-as gifted sister “Martha Wainwright”, who frequently joins him on tour.

Neither has Wainwright ever given short shrift to some of the most unforgettable masculine entities in the history of the world. He has penned music for groundbreaking films like Brokeback Mountain, scored original choreography for Benjamin Millepied, and formulated his ninth studio album Take All My Loves: 9 Shakespeare Sonnets (2016) around actual textual adaptations of the Bard. Even some of the world’s most accomplished musicians would be sweating like a glass blower’s ass if tasked with creating modern, original operas from scratch. None such is Wainwright, who has done it twice, and that atop practically having invented the “popera” genre simply by showing up to the singer-songwriter scene as himself.

Having produced with everyone from Antony and the Johnsons to Burt Bacharach to Neil Tennant, it’s fair to wonder that Wainwright’s superlative delivery has not been set to signals and synths sooner. However, perhaps it was this exact moment in time that was needed as the AMPERSOUNDS fellows are no humdrum hang-abouts either. Their meritable reputation for not being ones to ever put a perimeter on a song or genre has set Wainwright’s catchall cantillations aflame with something novel, nectar-like, and sure to set the owls in your ear-rafters aflight.

Though this remarkable EP marks AMPERSOUNDS’ first formal release as an exclusive duo, they have always had an avaricious appetite for voluminous voices, as memorably demonstrated in previous harmonic hookups with potent powerhouses like Macy Gray and Charlz. Likewise, if you have somehow up to now never full-body boogied to their bodacious “Watch the Sun”, stop everything you’re doing and get that sorted today. Your bum will thank you just before you watch it disappear down the lane doing somersaults in disco glee.

With this pioneering EP production, AMPERSOUNDS will surely serve your rear and your ear the same way as it is beautifully bookended by two versions of “Technopera feat. Rufus Wainwright”. The first (QRO review) comes complete with a hypnotizing video designed to digital acme by Daft Punk creative director Cédric Hervet, who marries the oscilloscope synthesizer underpinning the structure of the song to a cosmic animation of continuous lines. The second version is both a movie soundtrack and the movie itself, feeling filmed on a planet undiscovered by anyone prior to these three audio astronauts.

Based on poetic lines taken from Bengali literary colossus Rabindranath Tagore, standout track “Solitude of Heart feat. Rufus Wainwright” is an apocalyptic dream of a song so figmental and emotive as to make your chest hurt almost before the end of the first bar. Falke and Freeman have layered the scionwood that is Wainwright’s voice through a vintage modular synthesizer here. Beyond sounding sublime enough to call Tagore back from the grave, the result of the wild-mustangs-in-a-broken-paddock effect that production decision imparts to Wainwright’s already earth-shattering instrument makes many of the mightier male singers of today seem like little more than clodhopping cantors.

Much like the Vedantist poet who wrote the verses he is singing, Wainwright does not sell vulnerability and fragility as the fiddlesome finger traps that the internet age would have everyone believe they are, but rather as the gypsy romance within the general circus that is life. Both singer and writer suggest that we humans are all on the trapeze together – and all acrobats must fall as a matter of course. Wainwright’s entire career has valiantly refused to have its dreck denounced by the Ajax of absolution or approval. Like a poor man’s popinjay without the pretension, he just sings and celebrates it all, equally and evenly, in a sonic sanctuary he has constructed out of his heart’s own ribbons.

That Wainwright is able to draw depth and expanse from several lifetimes’ worth of gilt memories built on a sense of precipice amid a gravity somewhat reversed from that of the ordinary world – such as the night during his rock-bottom addiction week wherein he notoriously reveled alongside his mom and Marianne Faithfull – makes him the ideal vehicle to galvanize the words of the griot of the Ganges into song. He’s been no stranger to the particular weight of a “widowed evening” and listeners will hear that as clearly as they will his unmistakable tonality. As Wainwright’s own story-songs have always existed as colorful and storm-tossed nanospheres, full of punch artists, jugglers, mimes, consumptive opera singers, and all the best of life’s flea market pageantry, it is beyond moving and monumental to hear him sing someone else’s words and worlds with such effortless, unadorned intensity. This reflective, chimerical tune appears tailor-made for him by a seamstress who never took his measurements.

Next, this electro-eclectic EP time-jumps from the dual-daydreams of its opening tracks to the hard sparkle of early 1980s New York disco in the form of not one but three separate reimaginings of the aforementioned Raw Silk dance-garage jam that serve as the central nucleus of this record. Of the triad of fanciful facelifts “Do It To The Music ‘‘ receives under the skillful hands of the AMPERSOUNDS surgeons, the Fred Falke x Zen Freeman Club Remix may deliver the fastest four-digit door code straight back into the Paradise Garage frolic that first made it ultra-famous. No matter where or how you are sitting when you let this naughty little piece of arithmetic into your head, your shoulders will respond first and from there you’ll only be marginally accountable for whatever lemur-on-DMT moves the song moves you to invent on the spot.

Disco could easily be read as the shipwrecked sibling of queer culture in the seventies, for it lived as clandestinely for a time, and was, in many places, identically reviled and misunderstood prior to being fully subsumed into the mainstream. AMPERSOUNDS’ entrée EP sees hit-making heroes Falke and Freeman gently and reverently attempt to hand Wainwright into the carriage and carnage of the techno terrain, and the audience gets to listen as he steps in somehow owning the place and already able to direct the driver. Witnessing Wainwright turn all the danger and delirium of the dance music world into dundee cake in his mouth makes one think it might have been English writer and critic Lytton Strachey, a fellow gay man born almost one hundred years ahead of him, that accidentally captured our Manhattanite-Canadian carouser best: “He is so beautiful, I think he must be doomed. The gods do not give such gifts for long.” And yet here Rufus Wainwright is, still a boyishly handsome shooting star at age 47. And here we all are, still imbibing his every vocalized breath and loner maneuver like they are the firsts.

As a queer icon, Rufus Wainwright should long ago now be arriving everywhere on a dais drawn by elephants. As a beautiful boy, he has outlived and professionally outstripped nearly every other equivalently beautiful and obscenely artistic boy of his era (as well as the ones just before and after him) such as Jeff Buckley, the skyscraping subject of his “Memphis Skyline” and River Phoenix, whom he memorialized in “Matinee Idol”. When it comes down to the established guild of world-building gay men, Wainwright is in league with the likes of John Cameron Mitchell, Alan Cumming, Elton John, and Oscar Wilde. Whether it’s West End Records or “West End Girls,” he fits everywhere greatness flickers, but is ever sumptuously situated in a sodality that is unconditionally his own.

This inaugural AMPERSOUNDS release does so much more than help to celebrate the rooted legacy of the New York record label that fostered the careers of disco frontiersmen like DJ Larry Levan at Paradise Garage and that was largely responsible for the initial popularization of the 12-inch vinyl single as the format that came to dominate the entire disco age. This little record marries the production skills of two young stars (Falke and Freeman) working in that medium’s current incarnation with the living example (Wainwright) of why such optimistic music and such transformative places to share it are so necessary in the first place. It’s a breathtaking hybridization of ultra-modernism with florid classicism that goes a long way toward illuminating the required yin-yang balance of both if either are to survive and flourish. It also showcases how much more exquisite each form has the potential to become when its lines of demarcation are deliberately blurred by the other – a love-lesson so eternally relevant that no amount of re-releases could ever be enough.

Steve Kilbey & The Winged Heels – The Hall of Counterfeits