QRO got to talk to Anders Beck of Greensky Bluegrass about their current tour, co-writing, and much more...... 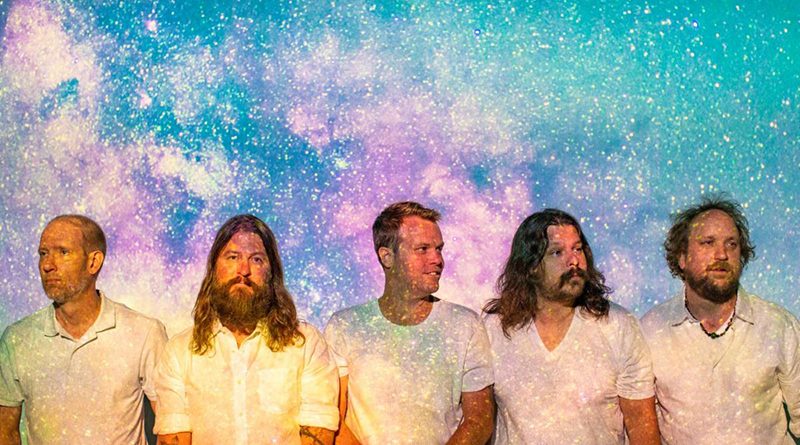 Chewin’ the Fat With My Do-Bro, Anders Beck

At Red Hat Amphitheatre in Raleigh on Saturday, August 20th, we were treated to the fabulous Greensky Bluegrass while they were touring with The Wood Brothers on their #WoodSky tour. In the days after, I was able to interview the dobro dynamo of Greensky, Anders Beck. We talked about the Raleigh show, their newest album, songwriting, and life. I truly enjoyed getting to know Anders and the time flew by. Keep reading to learn more about their recent local performance and about this kickass individual.

QRO: I just got to see y’all in Raleigh with our beloved Wood Brothers. Hah, I say “our” like they belong to us.

Anders Beck: Oh, they belong to us now. We love those guys.

QRO: Fair enough. You’re a family now and you’ll have that “blood harmony” phenom happening. Anywhere you like to eat when you’re touring in North Carolina?

AB: These days we really only get to eat what’s brought in because there’s just no time to go out, especially now that we’ve been on break for the pandemic for three years. We really need to rehearse all the time. And of course, each night I’m famous within a square mile of where we’re playing, so that can get weird. [laughs] I can still walk around an airport, I’m not that famous yet. Just good enough for my stupid ego. Hah.

QRO: Have y’all figured out how to have a Red Hat Amphitheatre shimmer wall installed in your yards yet? (GSBG recently started their Raleigh set by showing appreciation for the shimmer wall facing Red Hat.)

AB: Not yet, but who knows?

QRO: I love that y’all once covered Marcus Mumford’s version of Bob Dylan’s “When I Get My Hands On You”. Did you watch “The New Basement Tapes”?

AB: Watched some of it. Albums and movies are weird sometimes when they show “behind the curtain”. I don’t always like watching that.

QRO: My day job is in environmental and social sustainability, and I believe you have a degree in environmental economics and political science, which is super interesting. Does that education change the way you view the country as you tour around?

AB: Not particularly. It feels like eons ago, but I did gain critical thinking skills from education. The reason I put poli sci and economics in my environmental degree was because I felt that there’s scientists doing the work but they can’t advocate. Their job is to be neutral and just put forth the data. So, I was trying to connect the dots of politics and economics with science, and sometimes it’s politics and economics that shuts down the science. But yeah, I think critical thinking is mostly what I got from my education.

QRO: Is there anything especially fantastic that the fans do that really strums your strings?

AB: I love the little things that fans do, like jump with us in this moment during the melody of “Demons”. You can see who’s an inside fan during the jump. In “Fixin’ to Ruin” there’s this line that Paul wrote that goes, “This is the line I forget. Shit.” Our fans share that inside joke. When we first played with Sam Bush, I elbowed him and said, “Watch this…”. The lights came on and the crowd said the “Shit.” and he just doubled over. It’s almost more hilarious seeing the fans who aren’t in on the joke because they’re so caught off guard.

Also, Our fans make cool stickers of their milestones, like their 100th show. I’ll slap those kind of stickers on my case. So cool that people come to see us that much. Being able to look out each night and know that front row crew sets me at ease. Friendly faces.

AB: Mmmm. That explains it. People always say “Bluegrass from Michigan? What the hell?” but they forget or don’t know that the old Gibson factory was in Kalamazoo. All the instruments that Earl Scruggs played came from there and there’s a lot of ties to this scene. There’s traditional bluegrass and I love that stuff. Important that I studied that music, but I’ve got a lot of other influences. I love bluegrass but I also love the Grateful Dead and all these things create my music and my background.

For a long time, we felt weird having “bluegrass” in our name, like people would say “that ain’t bluegrass”. But it’s a continuation of it. We’re all taking a very strict genre and kind of evolving it which is what I enjoy. The folks at the IBMAs (the International Bluegrass Music Awards held in North Carolina) take all of this very seriously and I love that, too. My favorite guitarists were always from North Carolina.

So cool that people come to see us that much. Being able to look out each night and know that front row crew sets me at ease. Friendly faces.

QRO: Speaking of North Carolina artists, my dad actually interviewed Doc Watson in the ‘70s. Did you ever meet Doc or share the stage with him?

AB: I got to say “hello” to Doc once at a festival and I saw him play, but we never had a big connection beyond loving his music. I love talking to the “older guys” who knew the “much older guys” on the scene. We were the underdogs and the younger brothers for so long and now here we’re the older brothers. We were always the younger brothers, and it just sneaks up on you. But it’s fun now to watch folks like Billy Strings take off. We met him when his hair was high and tight, and he wore a suit! We’d joke “We’ll open for YOU” one day and now it’s just amazing to get a window into that evolution. When we first knew Billy, he said “I wanna jam like you guys. How do I do that?” I told him “Just stop stopping.”

QRO: “Just stop stopping” is such perfect advice for this scene, both literally and metaphorically. I feel so lucky to watch these young artists like Billy, Taz Niederauer, and Marcus King come up on the scene. Marcus is another North Carolina guitarist, like Michael Houser and Jimmy Herring.

QRO: I’m a big fan of Widespread Panic and Herring. The Panic fan base, while being good people, kind of pride ourselves on being a rough and rowdy crowd. The Greensky fan base seems to have a completely different tone and it seems like such a family.

AB: Our fan base is awesome because, like a lot of great fan bases, it was built from the ground up. I feel strongly that the way we’ve grown is one person at a time. Not long ago, we were still playing smaller venues in some tough conditions, and we’d still manage to pull off some killer shows, sometimes. So, someone would bring a friend to the show who hadn’t seen us before and then they’d become a fan. That’s the key to our success and to having such a loyal and awesome fan base.

Also, we’re not so removed from it all because a lot of these people are our friends. I wanna know these people, though it’s certainly grown harder to get to know everyone as we’ve gotten bigger. We also had interesting timing of the internet and our fan group growing at the same time. People connect with each other over our band. With bands who were already as big as Panic when these internet fan groups got to be a thing, there was almost too much of a collision course because these huge groups of people were coming together over something they already felt strongly about. I always try to give a heartfelt thanks at the end of each show and spread my appreciation for our fans. I mean it from the bottom of my heart each time, and I don’t know if it sounds canned. But it’s not.

For a long time, we felt weird having “bluegrass” in our name, like people would say “that ain’t bluegrass”. But it’s a continuation of it.

QRO: I’m used to bands, like the Dead, who have very established writers or writing pairs. Like, Weir wrote with Barlow, Garcia wrote with Hunter. But y’all seem to consistently mix it up. Other than the obvious, like the chance to write with someone like Benny Galloway, what inspires your songwriting pairings among the members of the band or the other musicians with whom y’all write?

AB: Motivation for pairings is all across the board. I wrote “Monument” with Chris Gelbuda, a great Nashville songwriter. I really needed help finishing it and he’s great at that. He can help me finish something and we’re good enough friends that we can tell each other if something’s just stupid. But I guess friendship equals honesty. I find that cowriting can be a little weird if there’s weird ego or respect issues where you can’t tell someone when you really like something and feel strongly about it. That can dumb down an idea if you don’t fight for that idea. In Greensky, someone will bring lyrics and melody to the table, and everyone is open to criticism and we try to approach it as a group, but of course, in the writer’s head, the song is already written. On this new album, “Stress Dreams”, Paul and Dave are singing what Mike and I wrote on some songs and that’s interesting because the majority of people will think they wrote what they’re singing.

QRO: Well, I’m glad to see you’ve returned to writing on this album.

AB: I’m trying to write more, and it’s been fun. I’ve been surrounded by my favorite writers most of my life so presenting your own song ideas to them is like “Ok, Shakespeare, what do you think of this?” No pressure, or anything. But you have to have confidence in your work and not suffer the imposter syndrome. There’s a book called the “Artist’s Way” that’s interesting. It helps people find that voice as an artist and feel confident in their work. I recommended it to any artist.

QRO: What prompted the Raleigh encore setlist of 1965-1970 songs with Wood Brothers?

I actually write a lot of the setlists, and I do put a lot of thought into them, and I think they’re interesting to consider. But in this case, it was just fun to reach out in cover land. That’s our cannon of songs. Easy and fun to play.

QRO: And they’re songs you know the audience will love.