Before what should have been the first U.S. dates for his new band Blitz Vega, British music icon Andy Rourke talked with QRO.... 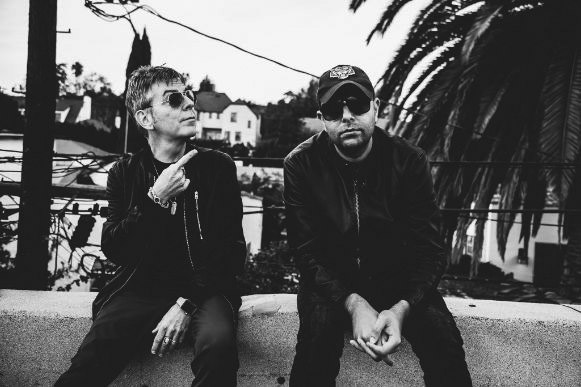 Before what should have been the first U.S. dates for his new band Blitz Vega, British music icon Andy Rourke talked with QRO. In the conversation, the famed bassist (The Smiths, The Pretenders, Sinead O’Connor & more) talked about how he started working with KAV [Kavin Sandhu] for Blitz Vega, the postponed NYC & L.A. shows, their upcoming “rockumentary,” recording at the historic Abbey Road Studios, the tragic end of his last project D.A.R.K. (with the late Dolores O’Riordan), changes in the music industry, better sound a pub than Royal Albert Hall, and more…

QRO: So what happened to the New York & Los Angeles dates?

Andy Rourke: Unfortunately, we had to cancel them. We’re in the process of rescheduling, just because of visa issues. A couple members of the band – not ‘issues,’ just things running slowly, everything getting delayed. Everything’s sorted out now. It wouldn’t have allowed us enough time to rehearse for the gig.

QRO: I’ve heard from many artists that America is tougher about visas than anywhere else.

QRO: Do you worry if British artists can play the EU, if there’s a no-deal Brexit?…

AR: Well, yeah. I think I’ve got two years left on my visa.

Either way it goes, I’m sure it’s gonna be a more difficult process, to get a visa.

QRO: Would those have been the first live, in front of a crowd, performances?

AR: We did one, in London. We did a recording session in Abbey Road. Where we recorded everything live, like people used to do in the sixties and seventies, no overdubs, no anything. We just did live takes. So we’ve got that. It’s gonna be an EP; that’s coming out soon.

The day after that, Red Stripe, in conjunction with This Feeling TV – they’re very involved in the music business in the U.K. They filmed us performing at this… I don’t want to say “pub,” because it doesn’t sound very glamorous. They have live acts on there. I suppose similar to a smaller Mercury Lounge, great sound system & everything. We performed, and that was also filmed.

In fact, this film crew is following us all over. They’re gonna be in L.A., as well. Supposedly doing… what’s it called, Spinal Tap… a ‘rockumentary.’

AR: It’s ongoing. They’re really nice guys. They’re not too in your face with the cameras. I get distracted, when there’s a camera in my face.

QRO: I always wonder about that…

AR: We were in Studio Two.

It’s just magical. Soon as you walk in there, you get goosebumps. I’ve been in there a couple of times before, but I still get excited.

QRO: Had you ever recorded there before?

AR: I did some stuff for a charity record. It was for the homeless people in London, called Consequences. It involved all of the Supergrass guys, Paul Weller… a bunch of people. It was like a ‘mini Live Aid.’

[Abbey Road] is just magical. Soon as you walk in there, you get goosebumps. I’ve been in there a couple of times before, but I still get excited.

But that was twenty-odd years ago. It was nice to be at Studio Two.

QRO: Did you do the tourist things, like walk across the street or write on the wall outside?

QRO: Were other people doing it, while you were there?

You could see all the local people, truck drivers pissed off, because they have to wait ten minutes while everybody crosses the street. “Avoid Abbey Road at any cost.”

QRO: Why did you decide to do EP and documentary, as opposed to just the regular ‘make a record’?

AR: I suppose we thought we’d make little teasers. I’m hoping that the LP will be the big gift to our fans.

QRO: You are a new band…

QRO: Do you know when that material will be out?

AR: The end of the summer. I think we’re gonna release another track, “L.A. Vampire”, I think it’s gonna be the end of June, maybe July.

QRO: Do you have other Blitz Vega material?

AR: We’re gonna bring out another EP, and then there’s gonna be the Abbey Road live EP. And when I go to L.A., there’s fifteen songs we’re gonna be working on – we have to choose ten. We’re gonna be doing that in the next couple of weeks.

Obviously, the tragic death of Dolores, I had this unexpected time on my hands. KAV had a window where he wasn’t doing anything either

QRO: How did Blitz Vega start?

AR: I’ve known KAV for years & years, when he was doing his solo project – he was still a teenager. Mani [Gary Mounfield, bassist from The Stone Roses] invited down to his gig in Manchester. He said, “You’ve got to check this kid out.” There were members of New Order in the audience as well – all Manchester ‘glitterati’ showed up. I was really impressed with it. I went backstage with Mani, and we had this rapport. He said, “Keep in touch.”

I was good friends with The Happy Mondays – the drummer’s wife is my ex-wife’s sister. So when KAV was playing with the Mondays, I used to see him.

I suppose the real time that we decided on something concrete was when I saw him at Coachella, again with The Happy Mondays. I was DJing then. We spent a lot of time backstage, and just sort of, ‘Yeah, let’s definitely work together.’

We were all doing different projects. I was working on the D.A.R.K. project with Dolores [O’Riordan, The Cranberries], and KAV was doing other stuff. And then, obviously, the tragic death of Dolores, I had this unexpected time on my hands. KAV had a window where he wasn’t doing anything either. I started making regular trips to L.A.

I think the first recording was at the House of Blues, which was really cool. And then a studio called ‘New Monkey’, where we worked on the mixing desk that was used to record Ziggy Stardust. Some of that stardust was still in there, definitely came out.

QRO: Because they can’t clean in it?…

AR: I meant the stardust ‘came out’ in the recording.

QRO: Oh, I thought you were talking about actual glitter… [laughs]

AR: I’m sure there probably is some glitter. Some eyeliner as well…

We also recorded in a downtown L.A. studio. We finished the LP in this studio called Voltiv. So we’ve got a full LP, a live EP – the Abbey Road one. Both ready for release.

I think about [Dolores O’Riordan] a lot, and what could have been. And how cruel life can be. Or death.

QRO: Do you ever wish you had a one-word, all caps name, like KAV?

QRO: You have teamed up with so many other famed artists in your career. Is this the first time you’ve worked with someone really younger than you?

I’m not too sure how old KAV is. He’s full of wisdom – I know that.

QRO: Is this the first new act you’ve been in since D.A.R.K.?

QRO: Not to get to personal, but what are the ways that one recovers from your band ending due to a member’s death?

AR: It’s not even just a band member – she was one of my best friends. Olé [Koretsky], he was in D.A.R.K. as well; they were dating. It was a massive trauma. I still can’t quite believe it.

I think about her a lot, and what could have been. And how cruel life can be. Or death.

QRO: In what ways have you felt the shifts in the music industry, from records to CDs to mp3s to now streaming, maybe differently from what a younger artist might feel?

AR: This is all new to me. Luckily, KAV, who’s a bit more of a whiz kid, always on his computer, sending stuff out here, there, and everywhere.

We gave away the first single, “Hey Christo”, just streamed it. I think you have to go with the flow, and move with the times and technology.

I saw that iTunes are gonna cancel iTunes. They’re just gonna stop it. It’s not gonna be called ‘iTunes’ anymore. And then you have to buy everything again…

‘Beware of the music industry.’ Maybe get a real job…

QRO: ‘Streaming numbers’ just doesn’t sound as good as ‘record sales,’ does it?

AR: Yeah, not quite so romantic, is it?

QRO: One can get ones music out there much more readily, to avoid record labels and other gatekeepers, but it’s also tougher to get paid. Do you think it’s easier or harder to be a musician these days than when you started, or the nineties?

AR: It’s definitely very hard to get paid, as a musician these days. I think we have to change the laws, Spotify, stuff like that. I think an artist gets like one cent every…

QRO: Anything you know now that you wished you’d known back when – or wish younger acts knew now?

AR: I don’t know – ‘Beware of the music industry.’ Maybe get a real job…

AR: Well, they do… amongst other bass players. [laughs]

Just one of those things.

I get more nervous in the small places. You can see the whites of people’s eyes.

QRO: Given how long you’ve been in music, can I ask you for a notable moment or story?

AR: I think when The Smiths played the Royal Albert Hall – that was a really proud day for me. I think for everybody in the band. We all brought our families down. We all had a box each, champagne.

It seemed a big deal at the time, to sell out the Royal Albert Hall – it’s not actually that big, when you think about it. It felt very kind of prestigious.

QRO: And as a ‘class’ thing, almost. To have the kids from Manchester, playing rock music…

AR: In such a historic building.

The sound was terrible, because the whole place was round. The sound just keeps going round and round. On stage it sounded fine, but apparently out there…

Spend money on the acoustics, have a sound system, have sound analysts who go around the room with special equipment, to decide what speakers you need, or where you need dampening. It’s become a bit of a science.

QRO: Is it all weird, going from playing a big place to a small place? But you’re also much closer to the fans…

AR: I get more nervous in the small places. You can see the whites of people’s eyes.

When you’re doing a festival or something, there’s the photo pit. You’re thirty feet – you can’t really engage them.

It’s a double-edged sword, because I do like to engage with the audience, but then, when I do, I can get distracted. They start waving, trying to give you gifts, photos, ‘Can you sign this?’ ‘I’m still trying to play! Maybe later…’