Animal Kingdom : The Looking Away

<img src="http://www.qromag.com/wp-content/uploads/2012/07/animalkingdomthelookingaway.jpg" alt="Animal Kingdom : The Looking Away" /><br /> <i>The Looking Away</i> is best when it comes in waves. ... 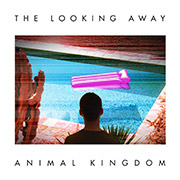 For many, Animal Kingdom came to ears thanks to wonderful single “Strange Attractor” (thanks, Matt Pinfield & revived 120 Minutes!), whose power “comes in waves,” as the chorus sings.  Or rather more fully quoting, “only comes in waves,” because much of the rest of The Looking Away isn’t in waves, and doesn’t quite match that great single, though occasionally hits greatness elsewhere.

Admittedly, The Looking Away does open with “The Wave”, an almost aggressive piece of ‘tronic-poppy wash, but it is the ‘tronic-pop that dominates the record (such as the following “Get Away With It”), not the wash.  That sound isn’t as special, especially in today’s over-saturated ‘tronic-pop scene, but at least varies from the disco-dance of “Get Away” to the twee-to-airy “Straw Man”, sweet and relaxed “Skipping Disc”, and even the funky “Glass House”.

“Glass House” is followed by “The Art of Tuning Out”, and while the former is the best of Animal Kingdom’s disco-dance on The Looking Away, the latter is the best of their non-disco (or waves), some solid indie-rock with both speed and space.  The dark & smooth reserve of “White Sparks” is interesting, but the following sweet “Everything At once” and “Alone Together”, to close out the album, aren’t as much.

The single is invariably the best song on the record, certainly for a young band, and it’s good that they can do more than just “Strange Attractor”.  But can’t help but feel that you wish more of The Looking Away came in waves.