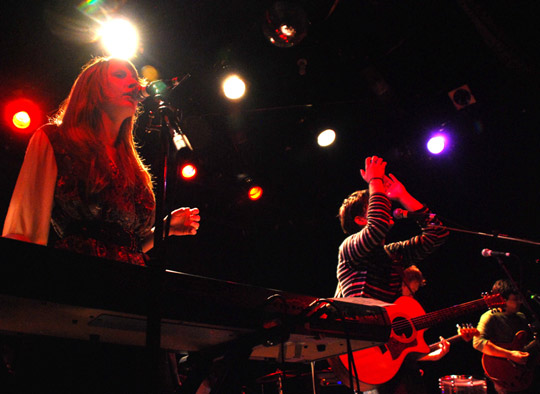 Last year, Raleigh’s Annuals finally followed up on the break through success of 2006’s Be He Me with Such Fun (QRO review), a record that took advantage of the greater opportunities available to them, post-success, while retaining their grand, effective sound.  However, their subsequent tour was as opener for Minus the Bear (QRO photos on tour with Annuals), a band with their own, rather specific fan base.  In addition, their date in New York was part of CMJ (QRO CMJ recap); meaning industry types diluted their own audience in the Big Apple even more.  While that might have been great for reaching new listeners, loyal lovers deserved their own dates, and the band gave it to those New Yorkers when they returned to headline Bowery Ballroom (QRO venue review) on Wednesday, January 28th. 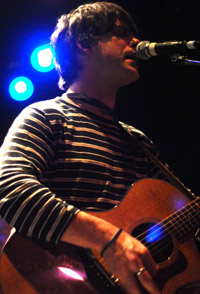 Hump day in January as the economy continues 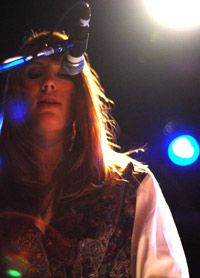 to melt down isn’t the best time to throw a show, and Bowery wasn’t stocked to the gills, but the crowd was thick with super-fans, including many shouts (from women and men) of how much they loved the band (though much of that was probably directed towards singer/guitarist Adam Baker – QRO interview – or the one female in Annuals, the alluring Anna Spence).  And now that all 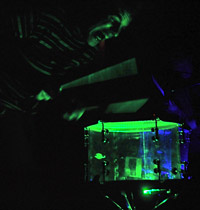 the members of the group are at least old enough to drink, it’s not quite as cradle robbing…

In addition to the widened sound of Such Fun, Annuals have also widened their live performance to include an impressive light show, which they kicked right off the bat in their drum intro, as the single drums that Baker and guitarist Kenny Florence hit would light up with each smack (and this is from a band that already has two full drum kits on stage, one for drummer Donzel Radford, the other for a rare drummer/guitarist, Zack Oden).  After that, they kicked off with Such Fun’s dramatic “Hot Night Hounds”, bringing the band’s high grand into the air at Bowery (but not 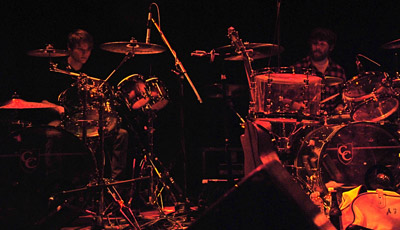 forgetting the axe-work…).  After a rather young-spirited “What’s up?!?  Hi, we’re Annuals!” from Baker, the band continued to have Fun, albeit with the alt-country road-weary “Always Do” (though Baker did add in a “Are you having fun tonight?!?” afterwards), and went on to two more Fun standouts, the evocative beauty of “Confessor” and the country-twang speed & humor of “Down the Mountain”.

Click here for photos of Annuals at Fun Fun Fun Fest 2008 in Austin, TX on November 8th in the QRO Concert Photo Gallery

Click here for photos of Annuals at CMJ 2008 in New York, NY in the QRO Concert Photo Gallery

The band then switched up instruments, but Baker, originally the keyboardist in Florence’s Sedona (now Sunfold – QRO album review), didn’t take to the keys at all that night – and when he did switch guitars, it was to the wrong one (after Florence 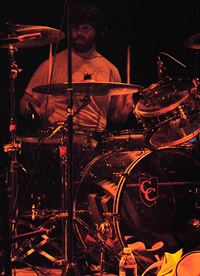 asked if it was the wrong guitar, Baker replied back “Wrong guitar Kenny!” in an almost mock-military bellow).  They also announced that they were going to play an old one, with which the crowd cheered – and Baker had to ask, “Which are 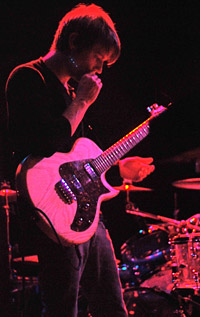 you more excited about?”  But they picked an oldie-but-goodie in Be He Me’s finisher “Sway”, which brings together the harmony, rhythm, expanse, and 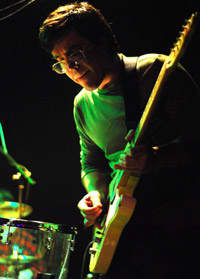 restraint of that record.  Annuals returned to present-day with the sophisticated alt-country of “Hardwood Floor”, but were then back in the past on the wistful “Fair”, the bright & smooth “Complete Or Completing” (whose opening charming lyrics of “Well I know / I ain’t spoken of love / In a queen’s age” drew roars of applause) and, after another instrument-switching interval, “Chase You Off”, whose atmospheric effects on record were given a massive dose of energy on Baker’s evocative chorus yell, “Well at least I found my sanity!”

Click here for photos of Annuals at Siren Music Festival 2008 in Coney Island, NY on July 19th in the QRO Concert Photo Gallery

The restrained piano of Such Fun’s “Springtime” was a touch too restrained after “Chase”, but Annuals brought it back with two of their three tracks from last year’s Wet Zoo split 7” (QRO review) with their alter-ego, Sunfold, “Around Your Neck” and “Sore”.  The catchy up-strum of “Around” was just as fun as on Wet Zoo, but it’s “Sore” that has seen real growth since it’s become a live staple, now as epic in both its sad, sweet parts and big, anthemistic portions as its excellent video (link).  The band then went into the encore break with the ultimate bookends to their career so far: Be He Me’s opening introduction to grandness, “Brother”, and then Such Fun’s sustainable shine closer “Wake”.

Click here for photos of Annuals at Great Scott in Boston, MA on November 1st, 2007 in the QRO Concert Photo Gallery

The group quite quickly returned from encore break with Baker’s holler, “Well, I’ve got magic in my head – magic in my nose!”  Like on Be He Me, that introduced the bright-psychedelic “Carry Around” (which the band had bumped down all the way from the second slot on the set list – QRO photo), and got a loud cheer.  Annuals finally closed out the night with Such Fun’s up-down grinder “Hair Don’t Grow” – ending it like the show began, with a multi-man drum outro.

Click here for photos of Annuals at Bowery on Halloween, 2007 in the QRO Concert Photo Gallery

Click here for photos of Annuals at McCarren Park Pool in Brooklyn, NY on July 22nd, 2007 in the QRO Concert Photo Gallery

Click here for live review of Annuals at Paradise in Boston, MA in January, 2007 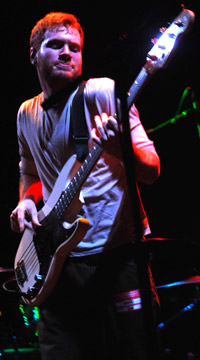 The six-person act is filled with standouts, and it can be a little hard to pick their ‘secret weapon’.  Is it Florence’s guitar work, or Spence’s keys – and hair?  Is it the workingman drummer Radford, or pretty boy multi-instrumentalist Oden?  No – it’s hyperactive bassist Mike Robinson (QRO interview), matching and even surpassing Baker’s funny faces while slapping and sliding that bass.  And together, all of Annuals gave their New York fans all they could have asked for. 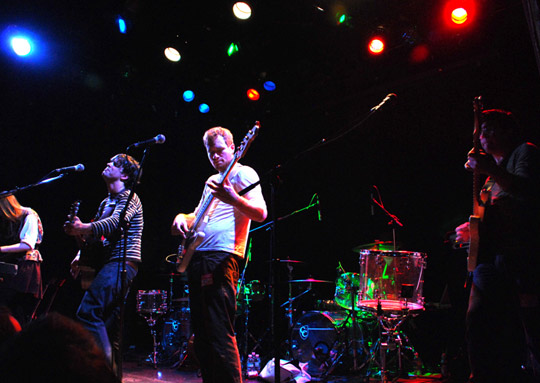