Recreate the feeling of being in a club – music or comedy – with 'Live and Alone in New York'.... 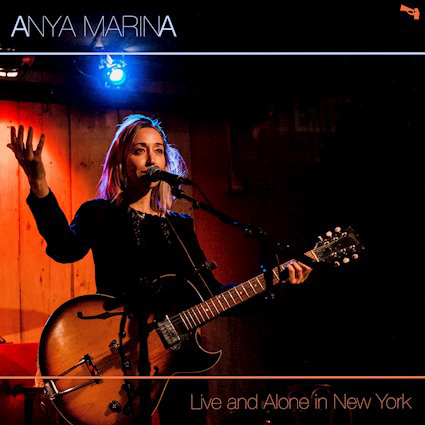 When the COVID-19 pandemic hit and everything shut down, musician Anya Marina was on tour opening (and tour managing) for comedian Nikki Glaser. Mixing comedy and music is a lot harder than Flight of the Conchords make it look, but Marina’s comedic chops have long been strong (see her web-series mockumentary Indie-pendant Woman). And now they get a chance to shine alongside her songs in her new live album, Live and Alone in New York.

Recorded at Rockwood Music Hall (QRO venue review) in December of 2019 (back when Corona was just a beer…) Alone sees Marina alone on stage, mixing between telling funny stories and delivering intimate tunes. What is particularly notable is how her introductions amp up the meaning of her songs, from her Russian mother’s thoughts about “Notice Me” to her ex & therapist inspiring both “Clean and Sober” and “Is This Love”. The pieces range from her early work to her then-upcoming Queen of the Night (QRO review), including her cover of Taylor Swift’s “The Man” that you don’t have to be a Swiftee to enjoy.

We’re all still waiting for everything to come back, most definitely including live music. Until then, recreate the feeling of being in a club – music or comedy – with Live and Alone in New York.