<img src="http://www.qromag.com/wp-content/uploads/2009/05/apostleofhustleeatsdarkness.jpg" alt=" " />Andrew Whiteman is even harder to nail down, not that it matters, on his new, varied, short Apostle of Hustle release, <em>Eats Darkness</em>.<br />... 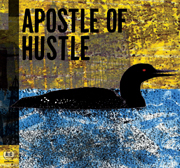 In Broken Social Scene-dom, and indie-dom at large, Andrew Whiteman (Apostle of Hustle) has always been someone people can’t quite nail down.  He’s been called the “unsung hero of Broken Social Scene” (QRO spotlight on), not so much because one doesn’t notice his excellent guitar work, but because he doesn’t fit as into a character type in the collective: Kevin Drew’s the engaging frontman, with whatever Canadian siren he’s brought along this time, while Brendan Canning (QRO interview) is the goofy nice guy, Charles Spearin (QRO interview) the soft-spoken hard-worker, Justin Peroff the sweaty, energetic drummer, etc.  But what to make of the guitarist that looks like a young Tom Waits, but moves in Cuban calypso rhythms, and jokes around like a mime or a silent film star?  What exactly is the ‘Apostle of Hustle’, anyway?

His first record as the Apostle, 2004’s Folkloric Feel, drew upon his times in Cuba, but was a disjointed affair, due to it being recorded & produced in between stints touring with BSS, who were blowing up at the time as part of the leading edge of the ‘Canadian Invasion’.  2007’s National Anthem of Nowhere (QRO review) was a much more put together and accomplished record, with Whiteman focusing on his original outfit (before he was roped into BSS, like so many other Toronto musicians in 2003/2004).   Broken Social Scene’s semi-hiatus at that time, followed by their ‘Presents’ records focused first on Drew, Spirit If… (QRO review), then Canning, Something For All of Us… (QRO review), allowed Whiteman to fully realize his promise with National Anthem, aided also by including the best piece he’d worked out while on the road with BSS, which provided the title of the record.  Eventually, Whiteman returned to the road with Broken Social Scene on the Something tour (QRO live review), but between that & the upcoming next Broken Social Scene record (this time, dropping the ‘Presents’), the Apostle has returned with Eats Darkness, an ambitious record that is a jumble of high points and well-intentioned diversions.

Most noticeable on first listen is Darkness’s short diversions into tech-sampling and recordings.  It opens with the thirty-second “Snakes”, wherein a smart-alecky kid explains that snakes have both male and female genitalia (“who could trust a bitch could go literally fuck herself!?!”).  There are two sub-minute interludes that include a tough chick talking about revolution (including Molotov cocktails), and two others containing voice recordings, electronica, cartoon-like sounds, and more.  These diversions don’t upset the listener, and certainly provide more variety than was found on Nowhere, but the over-teched & -reverbed “Perfect Fit” is not.

The second most notable aspect that comes out of first listen to Darkness is that it’s so short: at only just over thirty-five minutes, it feels almost more like the oxymoronic ‘extended EP’ than the likewise redundantly named ‘full-length LP’.  And some of that comes from the sampled diversions, shrinking its time span one from what one might expect out of a record with thirteen tracks.

But amidst all of this is some of the pressing Apostle of Hustle Whiteman so honed on National Anthem.  Right after the thirty seconds of “Snakes” comes “eazy Speaks”, whose latin/western rhythm-press is married to just the right amount of catch & evocativeness.  That style is altered a bit on tracks like the following brighter “Soul Unwind”, bit bigger “How To Defeat a More Powerful Enemy” and more harmonic finisher, “Blackberry”, but all the craziness in between make it not feel like Whiteman’s repeating himself.  And it isn’t either/or on Darkness, either.  Whiteman goes high and sweet with “xxerses”, but with interesting background effects.  “Regenerosity/Whistle In the Fog” is both atmospheric and experimental, while the following titular track is a fuzzy, lost steampunk instrumental.

More like a ‘ghost step’ EP between Nowhere and somewhere, Eats Darkness is a tasty but jumbled paella Whiteman has brought out between the road Scenes.  It won’t help any in nailing down the Apostle of Hustle, but that’s not really the point, is it?  Just embrace the sound and be happy that the Apostle’s still preaching.