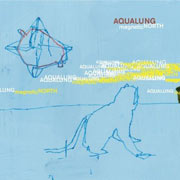 After nearly throwing in the towel and leaving the music business entirely, Aqualung (a.k.a. Matt Hales) returns with Magnetic North.  All of Hales’ usual cohorts were involved in the making of the record (brother Ben Hales and wife Kim Oliver have always been paramount players).  This time around, Hales also decided to enlist a trio of female vocalists to lend backing vocals (Sara Bareilles, Allison Sudol, and Kelly Sweet) on various songs throughout the album.

"Magnetic North" consists of two types of tracks – up-tempo sing-a-longs and signature Aqualung ballads.  Hales’ strong suit has always been his ability to craft declarations of despair from a bleeding heart.  "Lost", "Sundowning", and "Remember Us" are the star pupils in this category.  Meanwhile, opening track "New Friend" feels as if it would be at home on a Charlie Brown Peanuts special with its 1960’s vibe, while "Fingertip" encourages the listener to engage in some toe-tapping and mimic the ever so catchy ‘doo-doo doo-doo’s in the intro.

In typical Aqualung fashion, the entire album is based around the piano.  Hales’ breathy voice alternates between expressing joy and longing depending upon the mood of the particular song.  As a whole, Magnetic North is his most up beat album to date, lending a very different feel from Hales’ previous work, though it shows he still has a few good numbers left to pen.