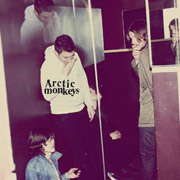 Remember the Arctic Monkeys?  A few years ago, the Sheffield, U.K. band was the absolute biggest new thing in music, thanks to their unprecedented MySpace-driven success, which allowed them to bypass major labels – and gave rise to an almost immediate backlash to the band’s sudden fame (even a New Republic article denounced them & bands-getting-famous-by-MySpace).  Arctic Monkeys mocked their sudden success by titling their follow-up EP to smash-hit Whatever People Say That I Am, That’s What I’m Not, Who the Fuck Are the Arctic Monkeys? EP, but the storyline on them was already written (and notice nowhere does it mention their actual music…).  2007’s Favourite Worst Nightmare (QRO review) full-length came fairly hot on the heels of Whatever & Who the Fuck, but now, after a longer break, the new Humbug tests how relevant the band still is, and post-fame, like during-fame, they’re still decent, but not amazing.

With Humbug, Arctic Monkeys have definitely gotten more complex than early pieces like hit single, “I Bet You Look Good On the Dancefloor”, but less enjoyable.  Dark, bass-driven lines dominate even more (which is especially interesting, considering original bassist Andy Nicholson left during the peak of the band’s fame), usually in an up-down, staccato rhythm that gets less interesting, the more it is done.  Eschewing the more electro sounds of Favourite, Humbug points towards a back-to-basics, then-rebuild-from-there record.  Sometimes the rhythm just gets more off-putting, the more it is developed, like on single “Crying Lightning”, but other times, squares the circle, such as with “Secret Door”.

As Humbug goes on, Arctic Monkeys do stretch out into some other directions.  A come-on sly is added to “Potion Approaching”, haunt guitar procession to “Dance Little Liar”, while the rhythm mixes between speedy & grind on “Pretty Little Visitors”.  However, the only really interesting addition of any of those is the speedy portions of “Visitors”, and the longer grind portions bog those down.  Better is when Arctic Monkeys get relaxed, whether sly on “Fire and the Thud”, or pretty-love with “Cornerstone”; closer “The Jeweller’s Hands” does the best job, as it combines both.

Remember MySpace?  Remember a few years ago, when it threatened to overtake the world, replace regular friends with ‘MySpace Friends’, and become a one-stop-shop for child predators?  At some point it was brought down to earth, not by the immediate backlash (or even by being purchased by Rupert Murdoch…), but just because it stopped being the new big thing (and how long until this happens to Facebook?…).  Arctic Monkeys are similarly post-fame, post-backlash on Humbug, which lets one judge them on a more even keel, where they don’t earn the hype or the hate.

The Jaguar Club : And We Wake Up Slowly