Arctic Monkeys : Suck It and See

<img src="http://www.qromag.com/wp-content/uploads/2011/08/arcticmonkeyssuckitandsee.jpg" alt="Arctic Monksy : Suck It and See" />Are the Arctic Monkeys even relevant anymore? ... 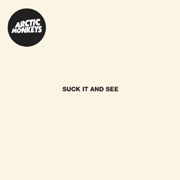 In this internet-driven indie music age, it’s hard for an act to keep up any sort of consistent relevancy, and that is certainly true for one of the first internet-driven bands, Arctic Monkeys.  Back in the middle of the decade we never named, Arctic Monkeys were the band to ride a wave of MySpace hype to success with Whatever People Say That I Am, That’s What I’m Not and follow-up Favourite Worst Nightmare (QRO review) – but after that?  While their commercial success hasn’t come crashing down like that of MySpace, with U.K. hits/Top 20 U.S. in 2009’s Humbug (QRO review) and now Suck It and See, the band’s relevancy has seriously declined.  Maybe Arctic Monkeys were never that great in the first place, because Suck is an unremarkable sixties-rock retread, punctured by a few moments of something more or less, for an album that no one will remember.

It would be too easy to say, “Suck It and See sucks,” or the like, and it’s not an out-and-out bad album – though it does have a pointless guitar-grind procession, with guitar-wankery, in “Brick by Brick”, “Don’t Sit Down ‘Cause I Moved Your Chair”, and “Library Pictures”; Arctic Monkeys try to be tough, and aren’t.  It’s just that so much of Suck It is only decent, and unoriginal, from opener “She’s Thunderstorms” and on.  The sixties-rock is nice in the way sixties-rock is, but also utterly familiar and far short of gripping.  Psych and sly elements, like on “All My Own Stunts” and “Reckless Serenade”, respectively, don’t add much.

However, exception should be made for Suck It‘s final two tracks, “Suck It and See” and “That’s Where You’re Wrong”.  Both are better versions of what the Arctic Monkeys are trying to do, the former in sadness, the latter in bigness, so perhaps there’s hope for this band to stay relevant in the post-MySpace world.