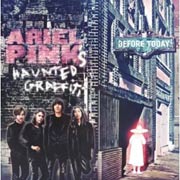 Ariel Pink is our first post-modern rock star.  The self-revered Godfather of the chillwave genre has made an impressionable mark on the Los Angeles music scene despite a reclusive and hermitic lifestyle.  Pink’s sojourn to stardom has been unusual to say the least – with a handful of lo-fi, eight-track recordings released only on tape, and a recording procedure that utilised beat boxing in lieu of drums, it seemed that Ariel Pink (birth name: Ariel Marcus Rosenberg) would remain undiscovered and misunderstood.

Enter Animal Collective (QRO album review – and their newly formed label Paw Tracks) who, after experiencing Rosenberg’s warped and fragmented art-rock, saw past the kitschy and vastly unmarketable exterior, glimpsed signs of raw genius and promptly signed the Californian to their label.  The rest, dare one say, is history.  Years passed, and Ariel Pink continued to churn out his now signature surrealist endeavours into pop nostalgia.  Beginning with The Doldrums in 2004 then Worn Copy and House Arrest (in 2005 and 2006, respectively), Rosenberg gained a cult-like following and his reputation as a purveyor of guilty pleasures for the terminally abstracted grew to a global status.  But the musical cognoscenti, cynical as they are, doubted the true extent of Ariel Pink’s musical range and predicted that he, despite formidable buzz, would end up forgotten and rendered obsolete.

Oh how wrong they were.

Towards the end of 2009 Rosenberg announced that he had joined forces with indie heavyweights 4AD.  This would seem to be an odd move from an artist who spoke out against mainstream recording and corporate conglomerates.  Perhaps Ariel Pink was eager to share his music with a wider audience, or maybe he was growing up and maturing as a musician and songwriter; or could it be that this chillwave Godfather was made an offer he could not refuse.

Following this unexpected change of commercial heart, it was revealed Mr. Pink was hard at work on a new album that would be recorded in a studio, with a conventional band.  The result of this synthesis (studio and band) is Before Today, Ariel Pink’s latest and finest work.  Despite being Rosenberg’s eighth or so release (exact figure unknown), he has called it his “first” album.  Perhaps a more accurate description would be a culmination of all his previous work, presented in a consumable, coherent and marketable package.

Before Today is a step in the right direction for Ariel Pink; his unique and torpid instrumentation is still present, his lavish and sonically rich soundscapes are still very much intact; but what sets Before Today far above any of his early releases, resides in the fidelity of the production.  No longer are Rosenberg’s musings forced to wade and struggle in lo-fi cassette quality – now these articulate songs of thought can soar and find new heights in a studio-recording environment.  But don’t take this as a sign that he has lost his original incentive and aggressive idiosyncrasies.  Ariel Pink’s songs still resemble haphazard and outré pieces of sonic architecture.  And his music still contains a sense of melancholia, painful honesty and self-denial that helped a young Ariel Marcus Rosenberg avoid seduction into the world of fake smiles, quick fixes, and neon promises of happiness – all of which surrounded him growing up in Hollywood (and were integral lyrical themes to his early recordings.)

What makes Ariel Pink a post-modern rock star, a cultish icon and so respected in the music industry, is his refusal to sell out to the Virgin or Sony bigwigs.  Despite numerous offers from said record labels, Rosenberg has remained true to his music and resisted financial temptations.  When asked if he wanted to occupy an Animal Collective-like spot in the indie consciousness, Mr. Pink gave a clear “No.”  And at times this resistance to fame and popularity has lingered on the point of self-sabotage.  Rosenberg was in fact close to matching Animal Collective’s achievements, and when critics began comparing the two, and notions of touring together were brought up, he left the label and fled from the indie spotlight for a number of years.

But perhaps self-sabotage was what Rosenberg was intending, for it seemed like he was intentionally making his songs inharmonious and impossible to sing or even hum along to – songs that otherwise could have been hits.  “I have had opportunities, I missed them all” he sings on Before Today‘s “Little Wig”.  Though the fact that these opportunities were missed ‘on purpose’ gives Ariel Pink a kind of legitimacy unbeknownst to most modern musicians.

Before Today gives the listener a window into the nefarious and unique labyrinth that is the mind of Ariel Pink.  It allows us to view the world through Pink’s kaleidoscope lens.  The record clearly takes influence from the past, showing signs of ‘60s pop/psychedelia, ‘70s R&B/funk, ‘80s new wave/dance, and ‘90s grunge.  But instead of a coarse amalgamation or a predictable act of revivalism, Rosenberg creates his own sound amidst the backdrop of these historic influences.

In fact Before Today sounds less like the actual aforesaid genres but more like the memory of these eras of music.  Each track is like a forgotten, and then rediscovered Polaroid of the past.  Worn, scratched, blurry and elusive; yet infinitely suggestive.

The record begins with “Hot Body Rub”, a leering funk instrumental, with synths and sax swimming strangely in the mix, like furniture down a Wonderland-like rabbit hole.  “Bright Lit Blue Skies” is actually a cover, first recorded by Rockin’ Ramrods in 1966.  The track offers evidence of Ariel Pink’s skilled new Haunted Graffiti outfit, a garage-psych foray in blazing technicolour.  “Fright Night” is a post-modern Michael Jackson-ish B-Movie supplement, that answers the aged question: “What would it sound like if Vincent Price sang the whole of “Thriller” instead of just introducing it?” Track number seven, “Butt House Blondes”, has a misleading grunge intro that promptly delves into a psychedelic and krautrock experiment.  The penultimate track, “Menopause Man”, is an off-kilter and dissonant homage to Roxy Music or Brian Eno (or even more accurately, something that sounds like the work Brian Eno did with Bryan Ferry on a weekend drug comedown.) The lyrics are slightly disturbing “rape me, castrate me, make me gay” as Rosenberg androgynously voices his distaste for his gender.

And one would be remiss not to mention “Round and Round” – album centerpiece and lead single.  A multi-layered triumph, “Round and Round” is so sonically flawless that it could mark Ariel Pink’s place in musical history even if the rest of his legacy were to be erased.  Complete with an infectious bass line and a sing-along chorus, Pink paints a surreal yet warm, Dali-esque landscape on our aural canvas.  With Beach Boys-esque vocals (or the lesser-known harmonies of Toto), “Round and Round” is immersed in the blissful languor that recalls Brian Wilson at his mid-sixties peak.  The track was mastered at Abbey Road and not a dollar of that cost went amiss.

No, Before Today is not groundbreaking or unprecedented, and yes, it relies on many aspects of past genres – but it does this in an entirely new way.  We see so many current artists lapse into parody and cliché when drawing on certain signifiers and mannerisms from the past for inspiration.  Before Today is far less superficial and affected.  There is an intricacy and care to the arrangements, and a sense that Rosenberg worked tirelessly but at the same time not at all, to create his sound – equal parts passion and apathy.  It seems Ariel Pink immersed himself in the music that inspired him, and then attempted to extract the best possible aspects from his wide range of influences – then create something completely new.  Before Today does not see the skeletons of bygone musical eras resurrected for nostalgic purposes.  There is no attempt to improve or change tested formulas.  Instead Ariel Pink’s music resonates far beyond these well-established precedents, and pushes the boundaries of music much further than many before him.

MP3 Stream: “Round and Round”