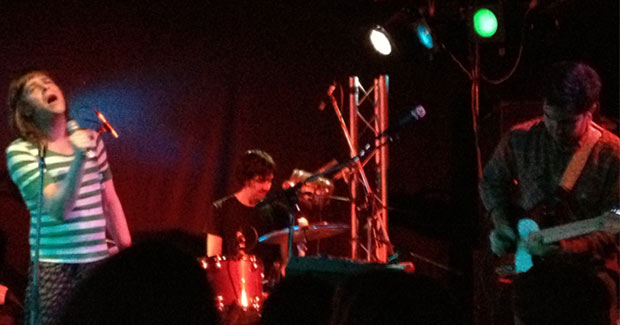 Thursday, March 8th, saw Ariel Pink’s Haunted Graffiti descend on one of Brisbane’s premier live-gig venues, The Zoo, treating participants to a hefty amount of material both new and old.  The concert presented a strange dichotomy between the polished professionalism of Ariel Pink’s bandmates, who delivered his glorious, wistful pop with aplomb, and the mixed efforts of Pink himself.

Ariel Rosenberg, the tortured genius operating under the name Ariel Pink, gave an enigmatic performance alternately screaming with demented passion or engaging in insouciant mumbling.  His enthusiasm seemed to correspond with the popularity of the songs, dipping for crowd favourites and looking the most authentically excited when performing the as yet unreleased songs that formed a significant part of their set.

The new material impressed, as Pink’s unadulterated talent for catchy melodies was obvious in the funky grooves that emanated from the outfit.  Though not hugely distinctive from his Before Today (QRO review) output, they’re sure to delight upon release.  They were so new that Pink had to resort to scraps of paper, bearing the lyrics, which slowly disintegrated over the course of the night after exposure to sweat and beer.

Before Today highlights “Fright Night (Nevermore)”, “Round and Round”, and “Bright Lit Blue Eyes” drew the biggest crowd response, though enthusiasm was high throughout.  It was clear that there was an unabashed love in the room for Pink’s theatrics and works.  The final song of the evening began with Pink repeating the mantra, “I’m David Jones, enjoy the music.”  An extended jam concluded with screaming, feedback and a knocked over mic stand.  A fitting end to an evening that seemed to be part musical performance and part performance art.