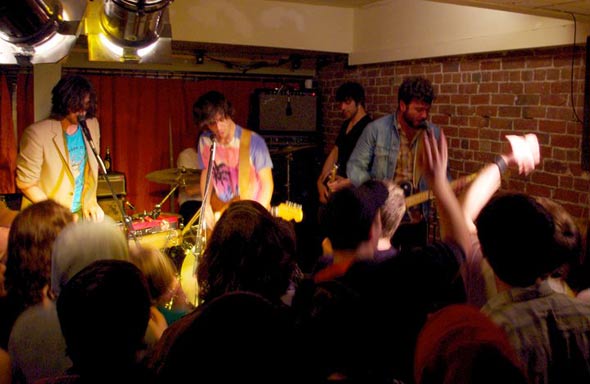 One of the worst things about living in a small city is when a great act rolls through town, and no one bothers to show up.  You want a good band to remember your city fondly, so that they’ll return one day, instead of making your home an inside joke at their later shows.  Moments like these are ultimately do-or-die for your musical scene.  Thankfully, Frederictonians had The Capital quite near the venue’s capacity before opening act Hollerado even took the stage on Monday, April 12th.

Click here for photos of Hollerado at SXSW 2010 in Austin, TX in the QRO Concert Photo Gallery

The Manotick, Ontario natives rocked the stage for a good forty minutes as people kept quietly piling in.  It appeared at times that the crowd was lost in their music, as the venue was, for the most part, hushed and still.  At the end of every song however, the audience would snap out it and burst into well-deserved applause and whistling.  Catchy singles "Juliette" and "Got To Lose" proved to be the best mix of Hollerado’s wonderfully distorted, heavy, and riff-oriented music.  All three of these qualities proved invaluable on the rockers cover of "Keep On Rockin’ In the Free World".  They managed to turn that one into a great crowd sing-along, before dismounting the stage, and trying in vain to move anywhere through the legions of people.

After a few delays and with a couple hundred people now jammed in the venue like sardines in a can, Hamilton’s the Arkells took the stage to thunderous applause and deafening cheering.  The five-piece were bringing their signature soul-rock to the province for the first time, and they did not disappoint early on.  The show kicked off on a cover of "Amazing Grace" – how many bands could pull that off?  – which revved into the early material of the band’s sole album, Jackson Square.

Though they did all their songs justice, they did not truly raise the bar until "The Ballad of Hugo Chavez".  With the boisterous crowd cheering them on, a spectacular instrumental lead by organ and alt-country sounding guitar then turned into perhaps the highlight of the night, on "Abigail".  A piano accompanied history of the teenage romance that inspired that song – in the hangout spot that inspired the name of the album – only gave the track more meaning, as the pleasant piano gave way to shredding riffs, and back again.  Despite Arkells following with a few of their less popular tracks, chanting, cheering, jumping, and screaming, continued to echo from the ever enthused crowd.

And what an eclectic crowd it was, with a heartening mix of young, old, and everywhere in between.  Many a demographic was well represented, and united under a banner of alcoholism and lust for some good ol’ rock ‘n’ roll.  You’d have a hard time expecting anything but a diverse mix for a band that prides itself on the hymns of the everyday man.

Despite dishing out a few mediocre songs, the Arkells recovered in a big way on Jackson Square stand out, "I’m Not The Sun".  Though a strange mash-up ensued midway, they managed to take it up a few notches with the spectacular closing guitar solo.

After playing a sonically pleasing new song, the bar staff kicked out a handful of drunks and the environment in The Capital seemed fresh once again.  Capitalizing on the moment, the Arkells rocked out to "No Champagne Socialist", and it was all up-hill from there.  The positive vibe continued through the band’s last few songs, which included great versions of "Oh The Boss Is Coming", and "John Lennon".

An encore saw a sing-along to fan favourite "The Choir", as well as a Hollerado/Arkells cover of Springsteen’s "Dancing In The Dark".  In spite of a crowd that was both terribly endearing and painfully annoying, it was the music that stole the show on this night.

The Apples In Stereo : Travellers In Space and Time