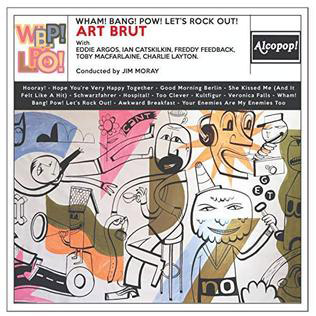 Well over a decade ago, Art Brut broke out exuberantly, with the very literal “Formed a Band” opening their debut Bang Bang Rock & Roll. Singer Eddie Argos’ hilarious and engaging talk-singing about everyday life and more made them instantly recognizable. However, the style became a little repetitive, and they seemingly disappeared seven years ago, only now to return with the welcome Wham! Bang! Pow! Let’s Rock Out!.

Argos may be older, but he hasn’t matured, whether singing about positive topics like love (“She Kissed Me (And It Felt Like a Hit)”) or just rocking out (the title track), or negative such as the kiss-off break-up “I Hope You’re Very Happy Together” or the unfortunate post-one-night-stand “Awkward Breakfast”. He has his wistful ‘one that got away’ “Veronica Falls”, but also takes on Art Brut’s own ‘cult’ status in “Kultfigur”.

Argos had moved to Berlin – and not L.A., like he promised in “Moving to L.A. – and other members of Art Brut have changed. Thankfully, their rock hasn’t, so let’s rock out!