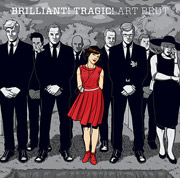 Art Brut grows up?  When the English band broke through in 2005 with Bang Bang Rock and Roll, there was certainly an adolescent nature to them in such songs as “Formed a Band”, “My Little Brother” (QRO video), and the title track.  Singer Eddie Argos (QRO interview) proved an excellent live frontman (QRO live review), but could the group evolve from there?  2007’s It’s a Bit Complicated (QRO review) and 2009’s Art Brut vs. Satan (QRO review) both saw the band move bit-by-bit from the engaging-if-limited Bang way, but with their latest odd-year release, BRILLIANT! TRAGIC!, the group manages to marry post-punk to their sound, for a sort of post-Brut.

Click here for QRO’s interview with Art Brut in 2009

Click here for QRO’s interview with Art Brut in 2007

Click here for photos of Art Brut at Maxwell’s in Hoboken, NJ on October 17th, 2009 in the QRO Concert Photo Gallery

Click here for photos of Art Brut at Mercury Lounge in New York, NY on June 5th, 2009 in the QRO Concert Photo Gallery

Click here for photos of Art Brut at Highline Ballroom in New York, NY on July 9th, 2007 in the QRO Concert Photo Gallery

Click here for QRO’s review of Art Brut at Studio B in Brooklyn, NY on April 16th, 2007

While, chronologically, post-punk would be the natural progression for the cheeky punks of Art Brut, the sometimes challenging sound would seem to be the absolute wrong fit for the band’s energizing, enjoyable nature and especially Argos’ rambling, hilarious lyrics.  However, such a mating can work, and BRILLIANT! has the tracks to prove it, starting with the actually TRAGIC! “Clever, Clever Jazz”.  Indeed, the first four songs on the new album are clearly the best, including “Jazz”, cheeky post-punk single “Lost Weekend”, ‘Why are you with him?’ “Bad Comedian”, and a bare post-punk + Argos sweetness “Sexy Sometimes”.

Unfortunately, from there, the record is less BRILLIANT!, as the back half has a number of tracks where this new post-Brut doesn’t work as well.  “Is Dog Eared” is too bare, and goes on too long (also not helped by being after the similar-but-better “Sexy” on the track listing), the stop-start staccato “Ice Hockey” meanders, and the band doesn’t do quite as well as you’d hope with such subjects as school boy crush (“Martin Kemp Welch Five A-Side Football Rules”), “Axl Rose”, “I Am the Psychic”, and “Sealand” (an unrecognized microstate on an abandoned British sea fort, six miles of the coast of England in the North Sea).  Those last four mentioned aren’t bad, and are even enjoyable, but pale when compared to earlier, esoteric Art Brut (“Martin Kemp” is no “Emily Kane” – QRO video).

Even from the beginning, Art Brut was going to grow up or fall by the wayside.  They edged into adulthood with their second and third records, but have definitely reached a new level of maturity with BRILLIANT! TRAGIC!.  They still need to grow into their new sound, but it’s a worthwhile evolution.

Guards : Resolution of One