After hearing Dark Bells headline at the Manchester Kraak Gallery, QRO caught up with bass player, Ash Moss, to find out a bit more about the London-based psych-gaze band.... 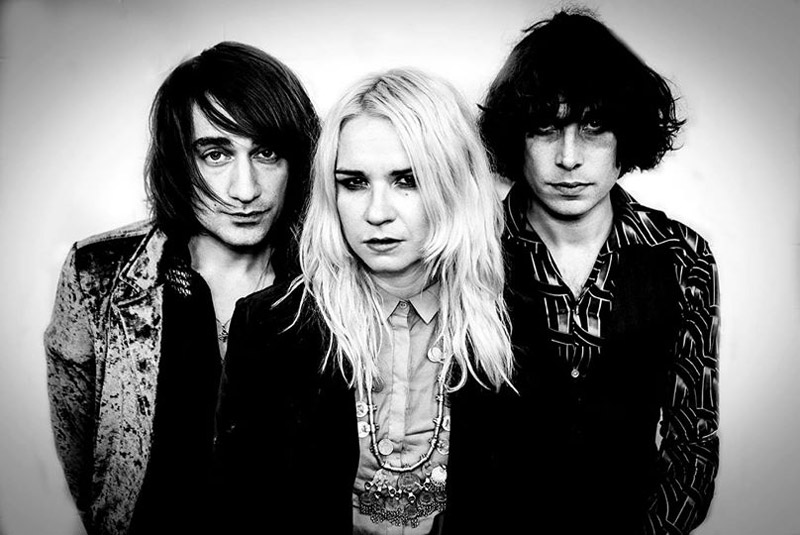 After hearing Dark Bells headline at the Manchester Kraak Gallery, QRO caught up with bass player, Ash Moss, to find out a bit more about the London-based psych-gaze band.  Chatting about musical influences, songwriting with fellow band member Teneil (Teneil Throssell, guitar and vocals) and their recent tour with Temples, we also find out that Ash likes a good glass of Shiraz…

QRO: That was a great gig – a great first song, a great set and about 200 happy punters.

Ash Moss: Thanks.  We played Manchester just a few weeks ago, supporting Temples on their U.K. tour.  We’re opening our gigs with a new track – “Do You Remember?”.  Our followers have given us some amazing feedback about it – it’s a really strong song.  Originally, I titled it “70s”.  The bassline reminds me, maybe, of ‘70s cop show chase music.  It’s a period of time, musically, I listen to a lot, like Marvin Gaye, Curtis Mayfield, James Brown…

QRO: American soul music is good – that comes through in some of your funky basslines.  Is there anything else in there?

AM: I’ve got a pretty wide range of tastes.  I grew up listening to Black Sabbath, as a lot of kids do, and we had Wicked Lady on in the van a couple of weeks ago, on the way home after a gig.  We were having a great time…

QRO: I see on your Facebook site you have posted a YouTube link to “Good Name” by William Onyeabor – a guy celebrated by David Byrne and Damon Albarn, among others, on the Luaka Bop label.  That’s über cool!

AM: I’m also into Afro-beat and Anatolian (Turkish) music, quite an eclectic taste.  David Axelrod too… I’ll put a mixtape together for you.  I’ll sort one from Teneil, too.

There’s no absolute process that we have to follow though.

QRO: Fantastic.  Back to the gig.  You’ve got some strong tracks in your set.  The second song was your first single, “Wildflower”.

AM: Yeah.  That’s our oldest song.  Teneil and myself wrote that a long time ago.  As far as I remember, we had two guitar parts, and then put the bassline down and then the drum part.  Our songwriting has evolved since then.  There’s no absolute process that we have to follow though.  Usually we have a bassline, which gives us a kind of groove feel, and then we use a drum machine to set up the beats.  Geno [Carapetta], our drummer, will come in and make it more real, and then we’ll lay the guitars on top, and then the vocals.  Other times, we’ll start with a guitar or melody, and work on the structure from there…

AM: It’s called “R-Beat” at the moment.  We haven’t really discussed whether we’ll end up calling it that, or not.  When we started out supporting Temples, it wasn’t quite finished.  But playing it live over two or three gigs really sharpened it up – we got some fresh ideas.

QRO: I saw Tom, Adam and Sam from Temples at the Manchester Kraak gig.  Was it good to see them again?

AM: We had a great time with them.  They’re really nice guys.  It was so good to tour with them, and good to see them again.  We travelled all over the UK with them…

It’s rewarding because when you go home you know you’ve done a solid full day’s work, yet you’ve also created something from nothing.

QRO: You then played “Run for Daze” and “Paradise”, and ended with “In Head”.  There’s some banging basslines and drumbeats in there, and Teneil’s voice is pitched on an ethereal level.  By then, the crowd had lost it…

AM: “In Head” is our next single.  Again, we’ve had some fantastic feedback from our fans about it.  It’s just a brilliant way to finish the set.  Everyone leaves on a high…

We put “In Head” on social media to coincide with the tour.  Teneil’s been working on the video for the radio edit version – but the live version is extra long.  We’re going to put that version on the album.

QRO: Ah, you mentioned that you’ve been back in the studio.  What are your immediate plans?

AM: Yeah.  We’ve written a couple more tracks this week.  Teneil and myself have been working such long hours.  We’re deep into it.  It’s rewarding because when you go home you know you’ve done a solid full day’s work, yet you’ve also created something from nothing.

We’ve recorded five songs for our album, and we’re going just go in and probably record another five or six more.  It should be out in vinyl, CD and MP3 later in the year.  We hope to have a 7” single out in advance too.

I do like a bottle of good, fruity Shiraz wine.

AM: Absolutely.  We’ve built up a following since we started playing here, back in 2011.  We started playing venues local to where we are in North-East London, then moved around the capital.  Our first gig outside London was in Brighton.  Last month’s U.K. tour was a first for us, though we have played festivals in London (2013 Field Day) and outside (2013 Beacons).  Our next gig is the infamous London Cave Club over Easter Weekend.  And then we’ll be looking at festivals.  We’re dying to visit the Europe mainland soon too – that’s a main ambition.

QRO: I see that you DJ too?

AM: Yeah.  Both Teneil and myself.  There’s a great music scene in London’s Dalston and Camden Town.  We’re DJing at the Lanzarote Party at Camden’s Lock Tavern Festival over the Easter Weekend too.

QRO: Partying with a drink or two?

AM: Probably.  But I do like a bottle of good, fruity Shiraz wine.

Nothing – Guilty of Everything