In the ‘80s, when Mark Burgess’ band The Chameleons ended most of their gigs with their angry and sometimes hysterical cover version of Alternative TV’s “Splitting In Two”, the... 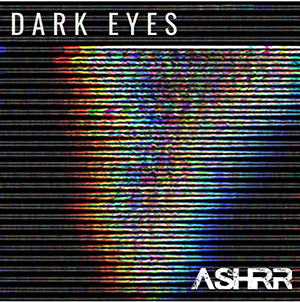 In the ‘80s, when Mark Burgess’ band The Chameleons ended most of their gigs with their angry and sometimes hysterical cover version of Alternative TV’s “Splitting In Two”, the Mancunian singer chanted, “We’re living in strange times,” a reference to their third record (Strange Times), but also a recurring theme he was going back to since the track “A Person Isn’t Safe Anywhere These Days”: insecurity – personal or public – and how things were changing –normally, for the worst – in the most surreal of ways.

The personal insecurity vibe can be felt in the new single by L.A. wonder trio ASHRR, “Dark Eyes”.

Delving into the melancholy only The Cure can offer, the metallic reverberating guitar of the beginning echoes the sound of My Bloody Valentine and the drum pace mirrors the calmer numbers by DIIV.

As usual with the Americans, the song hides many details that contribute to its obscure atmosphere, the most significant of which is the evolution of the track patterns throughout the song, by using of different elements of the acoustic and electronic drums, which makes “Dark Eyes” flicker in different directions, even if its base is very defined from the start.

Lyrically the words by singer Steven Davis go back to a subject he wrote about in the band’s 2019 LP Oscillator: that of human relationships and how we’re perceived by those around us.

“You sold what was precious for a good time,” is what Davis sings at the end of the second verse, a sign that the path the person he’s singing to was not entirely the right one. However, the chorus, “Watch out dark eyes on you / Don’t be afraid now / Your smile all black and blue / Safe in my heart forever,” indicates that there’s hope that those around us can see through our mistakes and imperfections, a feeling crystallized in the last line, “I will stand aside / But I won’t go”.

Coming back to the issue I was pointing out at the beginning, the lyrics claim that even in the strangest and darkest of times there’s hope that we won’t be alone and that we can be accepted for who we are, so we can change and better ourselves.

The song evolves along with the lyrics and the last third of it is the key, as the mood mutates from pure melancholy to an emotional struggle in pursuit of hope, a feeling you can also see in the lyric video accompanying this review. It starts with obscure and night images and photos of the sea at night, clouds and early morning storms, but then they slowly shift to more hopeful and brighter images, ending with a calm beach shore in the morning.

In a year when gigs have been non-existent, ASHRR has focused on perfecting their repertoire with the previously reviewed single “Waves” (QRO review) and now with “Dark Eyes”, prelude of an EP that will see the light in early 2021 and that could well be some of the very best songs we may listen to next year.

Watch the video for “Dark Eyes” below:

Nothing – The Great Dismal