In 1997’s U2: A Year In Pop, bassist Adam Clayton said something among the lines of “Nothing wrong would happen if we keep trying new things. On the contrary,... 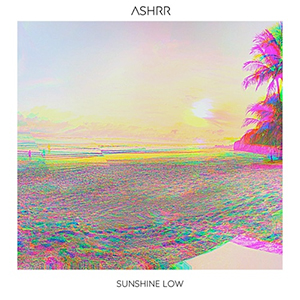 In 1997’s U2: A Year In Pop, bassist Adam Clayton said something among the lines of “Nothing wrong would happen if we keep trying new things. On the contrary, things will go south if we keep doing the same thing.”

A good band, whether you like their music or not, will always be that one that offers new sounds and details in the next single or record, that collective of minds who keep struggling to offer the best music possible, and to surprise their audience. And it’s way harder than it seems, regardless of being huge as U2 or a cult band like L.A.’s ASHRR.

After a string of high-quality singles in 2020/21 (“Waves”, “Dark Eyes”, “Otherside”, “Same Way”, all of them reviewed on this very page – QRO reviews) the Californians return with a much-anticipated taste of what will be their new record, “Sunshine Low”.

Nocturnal, seductive, dreamy, this song is the first warning stating that we won’t find the masters of current indie and shoegaze going at it again, not at all. ASHRR have been experimenting no end, and this first taste is a melody that reminds of the much mellower and feel-good Caribou or Khruangbin.

The band still retains that nocturnal aspect of their music, that intimacy you can find in singer-songwriting tunes, that sense of space, and of letting the song breathe, but transported it to the post-pandemic world. Less is more, and all instruments add hints and elements which contribute to this understated yet cohesive song.

The lyrics, as usual, have that sense of making the listener feel at home, and reinforce the sentiment the band is having is these strange times, as stated by multi-instrumentalist Josh Charles, “Certainly there are highs and lows that happen to us all. Being able to appreciate the sunshine is so important because there are times when it’s not there, so it is only natural to really want to celebrate it when it appears,” the sun being a symbol for the optimism we all seem to lack in this current world of jabs, paranoia, isolation, lockdown and misery.

A point better exemplified by singer’s Steven Davis section of lyrics: “I wanna stay on the other side of grey / and swim under the stars in the sunlight.” Trying to catch those fleeting moment of joy and share it with the one(s) we love is an art in itself, and ASHRR claim we can have them when we least expect them, thus giving us hope amidst uncertainty.

The accompanying video goes on the same line, a lovely summery tale of two youngsters finding each other and enjoying themselves, being this, the first time the band has produced a proper video since “Waves”.

Mind you, even if these lines look like this is a song/video that doesn’t plunge in the depths of human nature, the band is sure they can deal with the same subjects differently.

Building on the success of “Otherside”, the band has found some proactive radio support in their native LA, and the snippets and hints they have been publishing nonstop in their social platforms (normally, they can be found using the moniker ‘ashrrmusic’) suggest this is just the beginning.

Watch the video for “Sunshine Low”: