If you’re a loyal reader of this outlet, I’m pretty sure you’ll have read many of our reviews where we question the utility of labelling an artist. Yes, you’re... 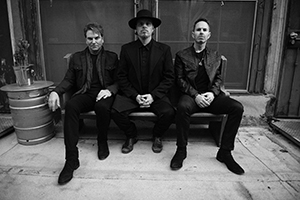 If you’re a loyal reader of this outlet, I’m pretty sure you’ll have read many of our reviews where we question the utility of labelling an artist.

Yes, you’re right, sometimes you have to include references so you have a starting point to pinpoint where in your musical spectrum a band can fit it. But doing so can be unfair to a band because most of us don’t have a clear picture of what it takes to create high-quality music, how three different personalities (in this case) may have come together and have adapted to each other to extract the best of their inspiration and their craft.

ASHRR is an LA-based trio who many have defined as “Darkwave, post-punk, synth-pop, synth-rock, alternative rock” (Rama-lama-ding-dong), but the reality is that they mix influences from those ‘labels’ and more.

Many outlets and even they themselves have claimed that the music they make has clear influences such as Bowie, Joy Division, Nine Inch Nails or Bauhaus, but if you have a listen to their first full-length work, Oscillator (released in last year), it’s not entirely like that.

It’s clear that songs like the single “Don’t Wait Too Long” sound like the most soulful Bowie if the late genius had had time to update that side of his music, but other songs such as “Artifact” delve into ‘90s indie rock, hinting New Order but not quite; “Sometimes” draws some urban funk that maybe (only maybe) reminds of Melbourne’s Midnight Juggernauts; and the second single, “All Yours, All Mine” merges the softest The Clash with some droplets of A Certain Ratio.

Even more: As an experiment, the band made a remix of the latter (The Dark Days Mix) and a new video for it, by changing everything apart from the lyrics, and the incredible new electronic version of it could give many Depeche Mode songs since their 2001 opus Exciter a run for their money just for sheer tenebrosity and tension.

A year later, the trio is still busy creating and we now have a new single (the real reason of this review, even after the roundabout just made to get here).

“WAVES” is arguably their toughest and most confrontational song so far. At least it is sonically, with a sense of direction that echoes “Leather” by Death In Vegas, with a distinct epic feel in the guitars of the middle-eight.

Bass-driven, tense, with no cracks or empty spaces even if it’s not saturated with different tracks and lots of details, the lyrics – written in confinement, due to the virus – tell us about struggles, how we face them how we can make amends with the world and ourselves if we manage to survive.

And it’s this sense of survival in the music that director Keith Musil tried to capture in the video. Most of you already know the old classic “The Balloon”, where a French boy chases a lost balloon through the streets of Paris. Now we have a tiny goldfish being treated like it’s worth absolutely nothing, but even with that, the little creature keeps going and going after overcoming sewage, a rollercoaster rides over rocks and vegetation, and almost sure death, before he rolls down again into the water.

In the end, the fish is saved by another hiker… or is it? A detail many haven’t seen is that this last character is the same tormented man from the ‘Dark Days Mix’ video of “All Yours, All Mine”, played superbly by Kelcey Watson… So, who knows?

Whatever the case, we’re in a strange place where music and image go hand in hand, making the video essential to really grasp the meaning of the song.

The pandemic makes it impossible to know when we’ll have a new full-length record by ASHRR, but as long as they keep sending gems like this to the sonic… waves, we’ll be fine.

Watch the video for “WAVES”: