If you have to choose a Latin-American country as an example of high-quality indie pop music, it’s highly likely that Peru wouldn’t be your first choice. Known by literature... 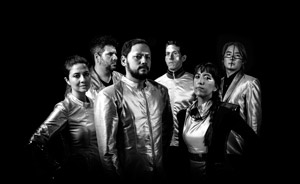 If you have to choose a Latin-American country as an example of high-quality indie pop music, it’s highly likely that Peru wouldn’t be your first choice. Known by literature and ancient history, Peru is a flourishing hub of bands and ideas. One of those bands is Astronaut Project.

If you’re an avid QRO reader, you will remember them from our recap of the Primavera Sound 2017 (QRO recap), when they were one of the guest bands of the organization at the Pro Stage. In that concert, they introduced some songs from their second album, Dreams, which insisted in the dream pop feel they started with their eponymous first record.

“When I was a kid I used to listen to the soul, pop, and rock of the ‘60s and ‘70s,” explains frontman, ideologist, guitarist and singer of AP, Alberto Zegarra. “And every time my father and I went strolling around I used to see a blind pianist playing beautiful tunes, so I started taking piano lessons.”

“In my adolescence I discovered bands such as Nirvana, Soundgarden, Alice in Chains, Pantera, Sepultura…” continues Zegarra. “But after a while playing in schools and colleges and rehearsing a lot, I discovered the, say, electro wave of bands, such as NIN, Ministry or Static-X. My curiosity about those textures and sounds, and my formation in the telecommunications faculty of Lima University helped me develop my skills in that area.”

With a school friend he started playing in bars and pubs in Lima, with the help of a drum box and small, beaten up amps and the strong will of being known, even if it only was at a local level. “You can say my first band with that school mate, Corrosión, was an industrial metal band,” laughs Zegarra. “But after several years and some changes in my life, I decided I wanted a twist in the music I was playing. I wanted to explore and expand my pop ideas at the time, and get more relaxed, so to speak”.

After a short stint with The Wolios, alongside another friend – Marco Mendoza – and some more changes related to the duty of working office hours to survive, in 2015 the Astronaut Project was born. Pop, rock, electro and a tinge of shoegaze were the first elements of those, somehow, primary songs. “I wanted the drums, guitars and keyboards to sound as clean as possible, no virtuous fill-ins, I wanted it direct and simple.” It was, virtually, a DIY project as Zegarra was in charge of the sound, parts of the production and promotion.

After a full year of work, the formula proved effective since Zegarra was required to play live in different cities in Mexico and his country, as the some of those tracks – especially, the single “Night” – he simply uploaded to Spotify or SoundCloud, gathered enormous interest and were featured in different compilations and lists. For that, he assembled a band and started rehearsing again.

The hard work of ‘15 and ‘16 lead a full tour of Mexico and incursions in other South American countries. Dreams, their second record, displays a more mature, organic sound. The title track is the epitome of AP’s sound: spacious, sidereal, expansive and catchy. There’s space for rocky guitars but real treat of the record is the two-part ballad “To Be Alone”, with a very effective acoustic guitar intro.

The repercussion of the band at home and in North America granted them an invitation to the Primavera Sound we spoke about earlier and their debut in Paris, as well. The fine-tuning of the songs kept Zegarra and co. very busy in the latter part of 2017, so last year started with more gigs and work to consolidate the sound of their third record. “Reptilian Song” was the first hint of what we could expect, and now we got another defining track, “Forever”.

“This song is pretty straight-forward in its concept”, points out Alberto. “Basically, it’s a ballad about having left aside something you really love and then you realize you wanna fight for it, no matter what.”

The electronic keyboard and drum sound remind of France’s Vive la Fete, but the main difference is that it is the epic use of guitars in the false chorus. It’s an instant classic of dream pop, the kind of tune that should be unmissable in a love song compilation.

Below we offer you the video of the song. Following the song theme, the concept insists about two people who want to get together, two souls that are different but inexplicably drawn to one another. “I think it’s a loop of sensations in the world of dreams”, points out the video director, Velit.

Astronaut Project’s third – and unnamed yet – record is in its last stages of production. “I want it to be as versatile as I can with pop, trip hop, rock…” says Zegarra. The due date of release should be around May. Those of you curious about the band, can go to their Soundcloud or Spotify page.