<img src="http://www.qromag.com/wp-content/uploads/2010/03/athleteblackswan.jpg" alt=" " />What is it about emotional rock that is so annoying and frustrating? <span> </span>Unfortunately, those feelings - those <u>emotions</u> - are bound to come to the... 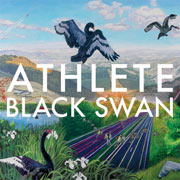 What is it about emotional rock that is so annoying and frustrating?  What is it that turns music fans apoplectic, or into the most cutting of haters?  Tons of widely-respected & -loved artists put their emotions into their music, but once you use that word – or worse, ‘emo’ – it becomes an object of derision.  Unfortunately, those feelings – those emotions – are bound to come to the fore when listening to Athlete’s latest, Black Swan.

That the U.K. act is emotional should not really be a surprise.  The band garnered serious notice in their native land with the emotional Vehicles & Animals in 2003, and then shot to #1 over there with follow-up Tourist two years later.  But 2007 saw the band seriously branch out into indie with Beyond the Neighborhood (QRO review), shifting away from their orchestral emotions and to a more alternative, and much better, sound.  But Beyond ‘only’ hit #5 in the U.K., Athlete & major label Parlophone split ways, and last year came Black Swan – a complete return to the emo-grandeur of their first two records that’s now coming to the States.

Not that the sound starts off bad, as opener "Superhuman Touch" does grand the right way, anthemistic, and well brings in an electro "Touch".  But then single "The Getaway" gets ultra-heart-on-its-sleeve, with lines like, "Please break my heart / Just so I can feel / At least I’ll have something I can believe" – sung pretty much just as you think it would be.  The emo-honesty plead of "Black Swan Song" gets even more so – by the time one calls the following "Don’t Hold Your Breath" forgettable, it’s practically a compliment, sandwiched as it is between the title track and the stripped alt-folk emo of "Love Come Rescue".

There are a couple of brighter moments on the back half of Black Swan – literally ‘brighter’, in the building effect of "Light the Way" and more interesting guitars to the penultimate "Magical Mistakes".  But there’s also the emo-grandeur overkill of "The Awkward Goodbye", and piano emo closer "Rubik’s Cube", which actually compares the object of desire to the eighties toy.

While emotional grandeur naturally feels rather mainstream, it can still be done well, such as Jack’s Mannequin’s The Glass Passenger (QRO review).  But Jack’s singer/songwriter Andrew McMahon had the weighty material of his diagnosis, treatment, and survival from cancer to inspire him, whereas Athlete singer/guitarist Joel Pott had the ups & downs of the band career to draw from.  Moreover, after making such headway, bringing such promise with Beyond the Neighborhood, Black Swan feels like the step back you had feared that the band would take.  And maybe that’s what’s so infuriating about emotional rock: not that it’s mainstream, but that it’s such a missed opportunity.

Toro Y Moi : Causers of This