What a way to start off 2013. A supergroup release like this gives all the other acts planning on releasing material this year a lot to live up... 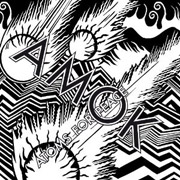 What a way to start off 2013.  A supergroup release like this gives all the other acts planning on releasing material this year a lot to live up to.  Atoms For Peace was first realized back in 2009 when Radiohead’s Thom Yorke enlisted the help of some expected folks and some others not so expected as his backing band for several solo performances.  They were so wildly successful and so much hubbub surrounded them that they eventually became their own entity known as Atoms For Peace.  Since then they have played many shows under that moniker and now finally in 2013 the general listening public can get its hands on their debut album of original material.  But the big questions loom, is this album worthwhile?  Should it have just been the next Radiohead record?  Is it different enough from the styles of the members’ main acts?

Let’s get down to the nitty gritty.

First off, Flea from Red Hot Chili Peppers (QRO album review) is a member of this band so that automatically kicks them up several notches on the scale of awesomeness.  His bass stylings really shine on songs like “Dropped”, “Unless” (after the 2:30 mark), and “Amok”.  The interesting thing about how Flea fits into Atoms For Peace when compared to how he fits in with Red Hot Chili Peppers is that there are songs with Red Hot Chili Peppers where he is prominently featured and many cases where the entire song centers around one of his bass lines, but in Atoms For Peace he is just one equal piece of the puzzle in that he doesn’t stick out any more or any less than any of the other instruments present.

The songs on Amok don’t feel like songs in the traditional sense in that they don’t follow the typical verse/chorus/verse/chorus progression but rather feel like jams from start to finish and they just drone on (not in a bad way) from beginning to end.  That shouldn’t be surprising for anyone familiar with the work of Thom Yorke and Nigel Godrich, so let’s keep going…

The opening track “Before Your Very Eyes…” is so repetitive that it seems way longer than the 5:48 that it actually is.  It is probably the one song on this otherwise great album that is difficult to warm up to.  Out of all the songs on Amok it may not have been the best choice for number one.  The song “Ingénue” is great in that it’s where the grooves that many have expected of this album really begin to kick in.  It offers a new (for Yorke and Godrich, at least) synth sound that proves to be quite exquisite.  The rest of the tracks are a complex tapestry of sometimes rhythmic and other times melodic emphasis.  For instance, “Judge, Jury and Executioner” is more melodic whereas the title track “Amok” is way more groove-oriented.  It is interesting to observe this juxtaposition throughout this album.

As far as drummer Joey Waronker goes, he is credited as playing drums on Amok but gets a bit of shortchanged in that a lot of the percussion is programmed and not many acoustic drums can be heard throughout.  No offense intended to him, but this really could have been any number of other drummers and it may not have made a difference to the album’s sound and impact.

One of the great things about Amok is that its replay value is high.  Not only because the songs are good, but because there are so many layers with as many different things going on that just one listen through won’t be enough to catch it all.  In that regard alone this album is a success.

So after many listens through this album, there are ultimately two sides to the coin.  The first is this: Amok is a good album.  These guys obviously have a good thing going and should probably explore it further to its full potential.  The second side of the coin is this: many times ‘side projects’ or secondary bands exist so that the artists involved can explore territory that they can’t traditionally with their main act.  So the question becomes, does Atoms For Peace differentiate itself enough from the main acts of its members to be worthwhile?  For Flea, yes.  But for Thom Yorke and Nigel Godrich, not at all.  Now that doesn’t mean that it isn’t a great album, and that it wasn’t worth their time, because it is and was.  However, there will no doubt be at least a subset of people thinking, “Yorke and Godrich should have just put these efforts toward the next Radiohead album.”

By itself, Amok is a fabulous work of art.  It might not live up to the supergroup hype one hundred percent of the time, but it is far from mediocre.  In fact, it’s safe to say, even though we’re only a couple months into 2013, that you will see this album resurface at the end of the year on many ‘Best of 2013’ lists.  Unless, of course, Radiohead manages to get their next album out by then…