While obviously similar to prior Au Revoir Simone, Move In Spectrums moves against the dance grain for a sadder album.... 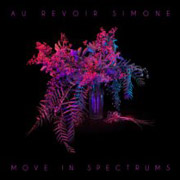 The three girls & synths of Au Revoir Simone would seem tailor-made for today’s chillwave, synth-pop, laptop era of indie music, but they’ve been around for a decade now, and don’t let hipster waves affect them.  At first they seemed naturally limited, if also naturally appealing, but 2009’s Still Night, Still Light (QRO review) saw the band expand on what they’ve done, while retaining their core.  After some side- & solo-projects (QRO review), the trio of Heather D’Angelo, Erika Forster, and Annie Hart (QRO interview) has returned with Move In Spectrums.  While obviously similar to prior releases, Move moves against the dance grain for a sadder album.

The dark under(synth)tone of opener “More Than” sets the tone for Spectrums (though the chorus vocals to it are a bit too bright – better fitting is the verse).  Au Revoir Simone are still sweet, but more resigned to the way the world is today.  Subsequent “The Lead Is Galloping” is almost an anti-dance song, while later numbers such as “Boiling Point” and “Love Don’t Know Me” are keyboard-loss washes.  Admittedly, the washes to close kind of wash together (“Love” feels like a coda, but there are two more songs left on the record), and don’t stand out the way that “Lead” or “Crazy” does – “Crazy” might be the most upbeat song on the album, but still isn’t too bright (and it’s nice to know, from the lyrics, that the ladies know what they do to the fellas, i.e., drive them “Crazy”…).  Sometimes the rhythm gets a little simple (“Just Like a Tree”, “Gravitron”), but then vocals carry the day (“Somebody Who” in between).

Au Revoir Simone might have started a decade too late for maximum attention (look at how much the three sisters of HAIM have garnered before even releasing a single full-length), but that time has seen them evolve their sound.