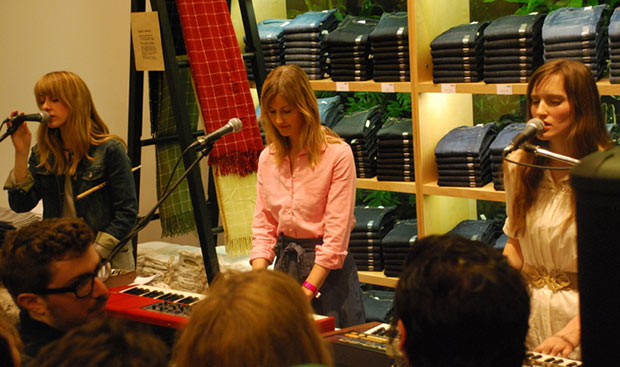 Most hipsters won’t set foot inside The Gap, or at least won’t admit to it, ostensibly preferring vintage threads from used clothing stores or haute couture from tiny boutiques.  But Brooklyn’s Au Revoir Simone brought the hip to the Gap when they played a special show at its SoHo store on Thursday, February 23rd. 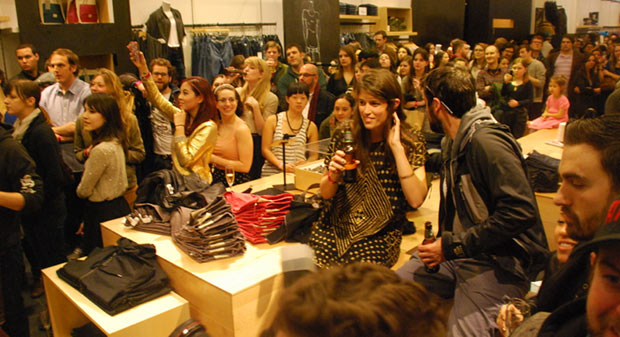 Click here for photos of Au Revoir Simone at 2011 Escape to NY in Southampton, NY in the QRO Concert Photo Gallery

Click here for photos of Au Revoir Simone at Echoplex in Los Angeles, CA on July 8th, 2010 in the QRO Concert Photo Gallery

Click here for photos of Au Revoir Simone at Northside 2010 in Brooklyn, NY in the QRO Concert Photo Gallery

Click here for photos of Au Revoir Simone at CMJ 2009 in New York, NY in the QRO Concert Photo Gallery

The Gap store on Broadway & Spring Street is one of its smaller boutiques, geographically close to the music venues of the Bowery area.  Long and thin, yet still with wooden display islands in the middle, it’s not ideal to hold a concert, as most in the crowd could only watch the band at the back of the store from afar, over the tops of people’s heads (the stage riser being only a foot off the ground didn’t help, either).  And that crush came after the crush in the middle of the store for the free drinks that were on offer, coming out from the side of the middle via waiters – the 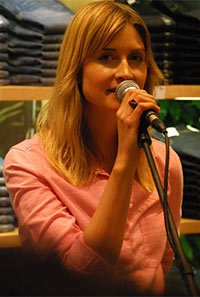 plates of drinks would go fast (especially when someone would insist on grabbing multiple drinks for them & their friends), and there was always a knot of people right where the waiters came out (the hors d’oeuvres didn’t last that much longer or get that much farther, either).  Indeed, later the waiters started walking around with bottles of champagne to refill glasses – The Gap didn’t skimp on class, with champagne, bottle beer, and mixed drinks to go with the hors d’oeuvres. 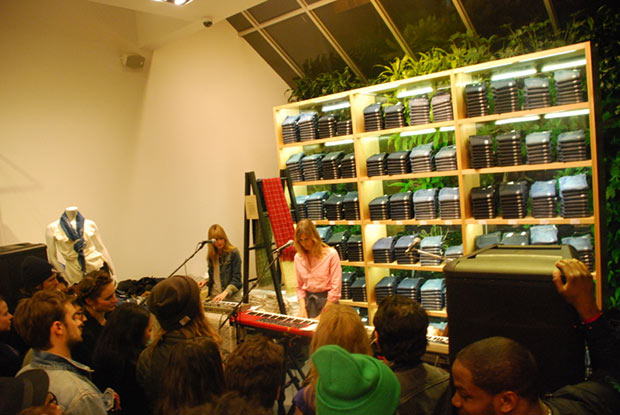 Click here for QRO’s review of Au Revoir Simone at Music Hall of Williamsburg in Brooklyn, NY on May 29th, 2009

Click here for photos of Au Revoir Simone at Union Pool in Brooklyn, NY on April 13th, 2009 in the QRO Concert Photo Gallery

The event was put on by The Gap, event organizers Death + Taxes, and streaming music site MOG, and despite the 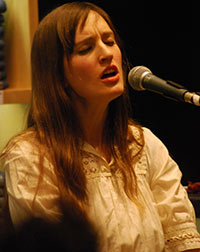 early hour – 7:00 to 9:00 PM – on a week night, free tickets went fast on EventBrite (and/or they knew enough to keep the capacity low at the small store).  The crowd was more fashionista than your usual indie audience – this isn’t the first time the ladies Simone have been involved in fashion, having played Paris Fashion Week and been featured in a New York Times Magazine fashion piece.  And purchases were 20% off – definitely saw some sales going on at the event. 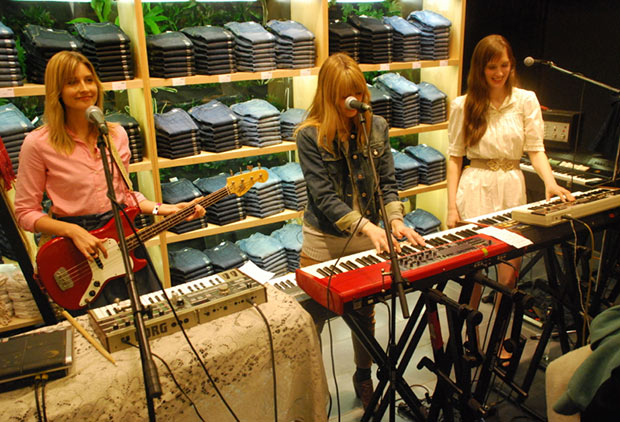 Still, over and above the drinks and the deals, people were there for Au Revoir Simone.  The keyboard trio has been quiet as of late, since finishing touring their last, 2009’s Still Night, Still Light (QRO review).  Members have been working on solo or side-projects, such as Erika Forster’s work as Erika Spring (QRO photos), or Annie Hart’s (QRO interview) work with husband/former Dirty On Purpose bandmate Doug Mervin as Pursesnatchers (QRO album review).  Currently working on their next album, the group opened with the new near-instrumental “Dream Baby Dream”, but otherwise played released material, mostly Still Night.  The best part of the set was Still Night‘s “All or Nothing”, “Another Likely Story”, and “Anywhere You Looked”, which were bracketed by the best audience interaction of the night.  First Forster helped spread the 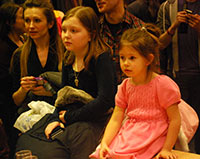 cheer by topping off champagne glasses of the front of the crowd (“Party on Wayne,” she added, with which came many replies of, “Party on Garth”), then Hart gave a shout-out to her special guests, her kid keyboard students, who were there with their parents – “The future of keyboard pop,” and, “We know about the next, next, next thing…”  And after “Anywhere”, Forster introduced “Sad Song” (from prior record Bird of Music – QRO review) by admitting that she hadn’t “done her homework” to pick which key to do it in, so asked the crowd.  This, of course, invited dispute, so Forster went with changing the key from the first option to the third halfway through (Hart seemed to put the kybosh on option number two). 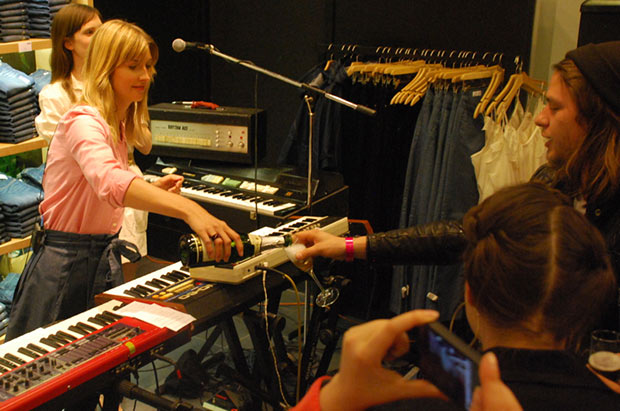 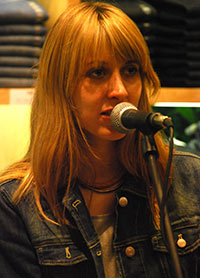 Forster, Hart, and ‘the quiet one’ Heather D’Angelo (who’s upgraded since joining her Simone sisters on the blonder side of things) played for about forty-five minutes, far longer than your usual in-store, and mingled with the crowd in what time was left afterwards.  Admittedly, the whole thing was still over early, but you were drunk by then (if you tried) and had the whole rest of the night free (could even, say, go see newest Arts & Crafts side-project Eight and a Half – QRO photos – play their second-ever show at nearby Mercury Lounge – QRO venue review).  And might have been the best reason ever to fall into The Gap.