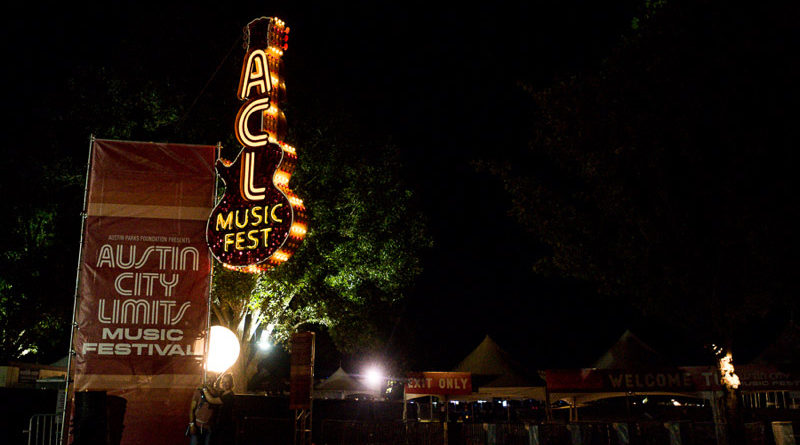 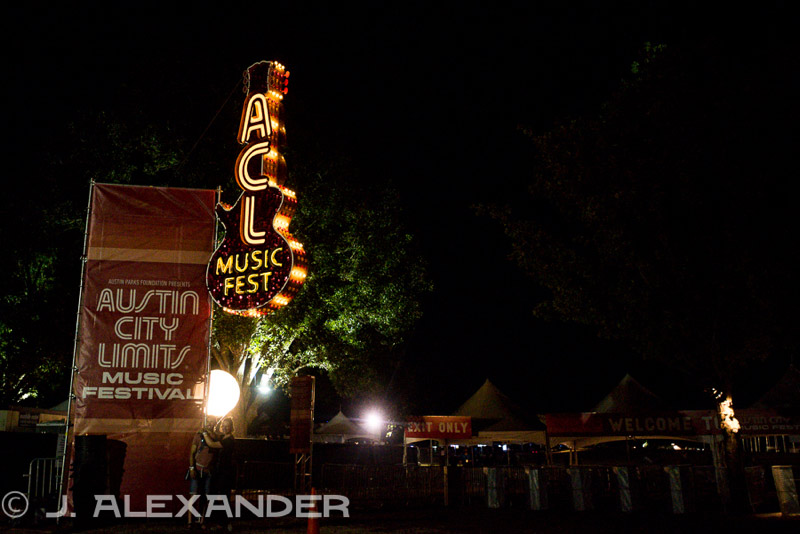 As the Austin City Limits Festival concluded its first weekend in the pecan tree-lined urban oasis of Zilker Park, chill vibes permeated. Although the heat returned with sunny skies, the crowds and lines were much more manageable on the final day, creating breathing room for taking group selfies and chilling on blankets. Sunday’s performers complemented the relaxed temperament of the festivalgoers, providing smooth danceable grooves from early in the day with D.R.A.M. until the nearly dozen cast of characters walked off stage at Gorillaz. 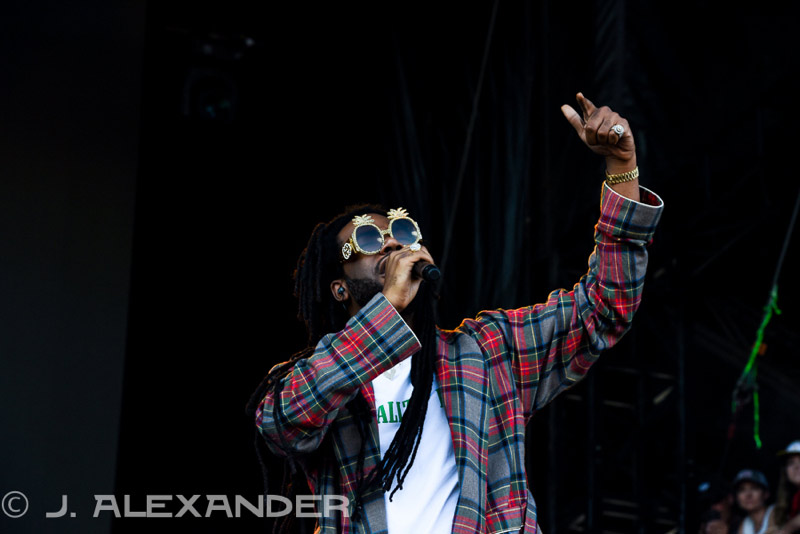 D.R.A.M., aka Does Real Ass Music, provided a soulful start to Sunday afternoon at the Honda Stage to a thinner crowd than the previous day. Decked out in a plaid bathrobe and bling-lined double pineapple shaped Gucci sunnies (that retail at Nordstrom for a tad over $1,200), the Virginia rapper/producer’s attire looked like it was inspired by The Dude from the Big Lebowski with a Cristal budget. D.R.A.M. laid on the sexy with his soothing R&B, asking the fans, “How many of you looking to end this night with some god damn good loving?” and then saying, “You play this muthafucking song right here though, and she fucking with it, and in the right mood, that muthafucker going down,” before leaning in to his humorous track, “The Uber Song”, released earlier this summer. 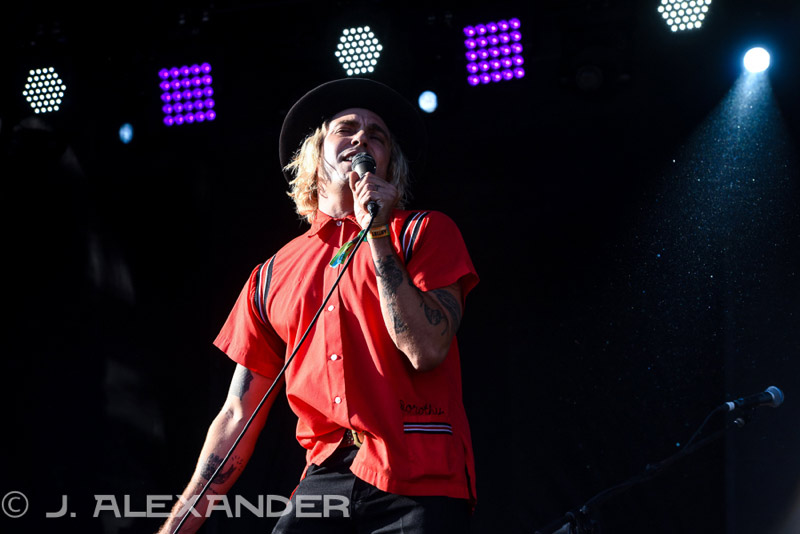 California psych surf rockers The Growlers are no strangers to the sun, and they got a lot of it with a late afternoon slot on the Miller Lite Stage. Hot off their ‘City Club Fall Tour’, frontman Brooks Nielsen strutted on stage in a red bowling shirt and medium brimmed black hat as he eased the crowd into their set with the thumping rhythm of “Drinkin’ the Juice Blues (Hashima)”, a surfy tune based on a song by the ‘60s Turkish band Tinariwen. Continuing with another ‘60s cover “Psycho” by country crooner Eddie Noack, the group started their original tunes on their third song “Hiding Under Covers” from 2013’s Gilded Pleasures, and then showcased the pleasant interplay of their three guitarists on four songs from their latest Julian Casablancas produced LP City Club, while beach balls bounced around the crowd. 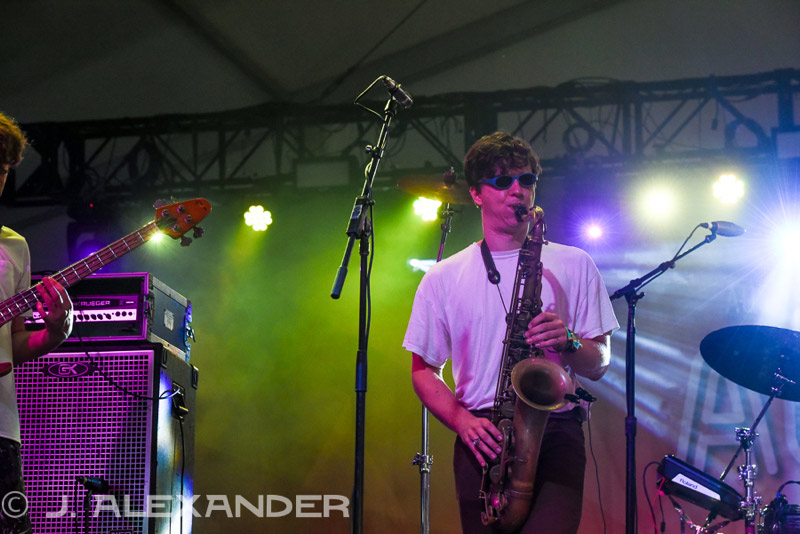 Performing live rhythms alongside the likes of Ghostface Killah, Tyler the Creator, and Frank Ocean, the talented young Toronto quartet BADBADNOTGOOD have been building an appreciation for jazz as witnessed by their overflowing audience at the Tito’s Tent stage – yacht rock for a younger generation, you could say. Drummer Alexander Sowinski laid down some break beats throughout the set that had heads bopping for 60 minutes. Accompanied by the solid melodies of keys player Matthew Tavares and sax player Leland Whitty on “Confessions” from 2016’s album IV over Chester Hanson bass riffs, the crowd was mesmerized by the virtuosity of their late afternoon instrumental performance. Although skipping weekend two of ACL, the quartet will be conjuring up some deep grooves out west at Desert Daze in Joshua Tree this weekend (QRO preview). 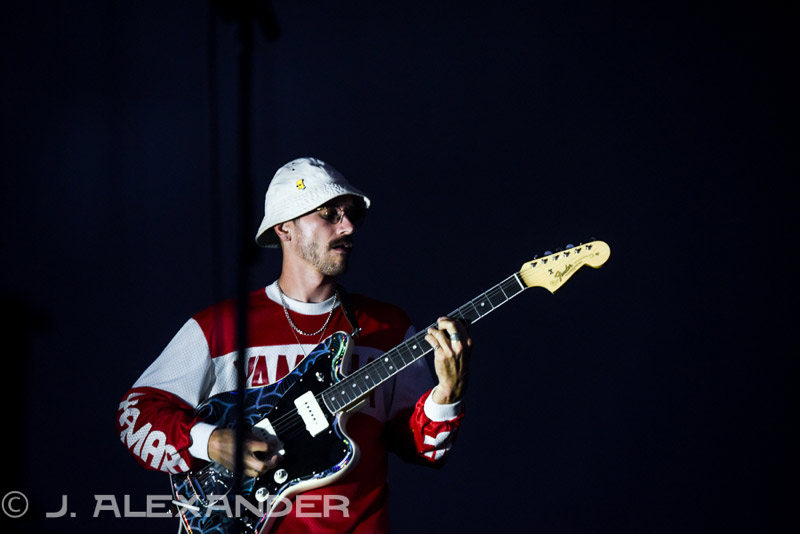 Performing in Austin for the third time in 2017, Portugal. The Man’s vocalist/guitarist John Gourley took the Homeaway Stage at dusk sporting Gilligan’s Island attire and his signature porn ‘stache to an audience not quite as large as Saturday evening’s. Kicking off their set curiously with covers of Metallica’s “For Whom the Bell Tolls” and Pink Floyd’s “Another Brick in the Wall, Part 2”, Portugal. The Man energized the crowd when they laid down the familiar synth wobble of “Purple Yellow Red and Blue” from 2013 album Evil Friends (QRO review). Gourley lead the crowd in singing the chorus, “All I wanna to do is live in ecstasy / I know what’s best for me,” while smoke and lasers permeated the atmosphere. Featuring additional cover songs by The Beatles and Oasis, the band disappointed some by performing their latest hit “Feel It Still” late in the set after many had left the stage to jockey for position to see Gorillaz and The Killers on either end of the park. 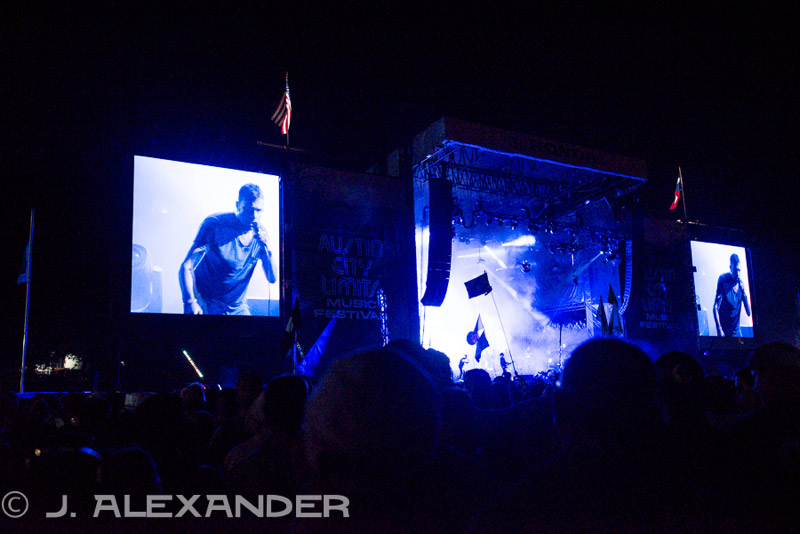 Who would have thought that a virtual band created in 1998 by Blur singer Damon Albarn and animator Jamie Hewlett, would have such a long-lasting reality as a hit-producing machine? Coming off a six-year hiatus with fifth studio album Humanz this year (QRO review), the Gorillaz live act featuring a choir section among other performers drew a crowd that rivaled cross-park closers The Killers during the final act of ACL 2017 Weekend One. Starting off with post-apocalyptic vibes of “M1 A1” from the 2001 self-titled debut album, the 16 song, 65-minute set featured a parade of performers including D.R.A.M. on “Andromeda”, Zebra Katz on “Sex Murder Party”, and Kilo Kush on “Out of Body” from their latest release. The dramatic set was complete with larger than life animations projected on the stage, Albarn’s soulful melodica playing on “Tomorrow Comes Today”, and grand finale of “Clint Eastwood” featuring Del the Funky Homosapien gracing the stage to rap his lyrics in person – the perfect recipe of high energy and catharsis to end what many will remember as a super chill weekend at Zilker Park.